A streamlined bike accessory and a plea for better bike research

Something almost magically bad happens when an ardent amateur bike rider designs bike gear. Chalk it up to beginner's audacity, or thinking unclouded by industry norms, but the outcome is often a strikingly simple solution to a much more complicated issue. And it almost always causes more problems in the process.

Please consider the Lumineer, and then consider talking to a mechanic before you redesign a bike accessory. The Lumineer is a bike light from the designer of the Kranium cardboard bike helmet. It is a bike stem with a light built into the front plate. This light is meant to streamline the look of your cockpit, eliminate complicated light brackets, reduce the amount of things you have to take with you, and deter theft. It's milled from aluminum, comes in black and chrome, and it runs on two CR2032 batteries. Simple!

On the other hand, you'll have to replace your stem, and take the front plate entirely off–leaving your bars dangling–just to change the batteries. You get exactly one option for stem length, rise, and bar diameter, despite the wide array of bodies and bike types it might appeal to...and despite the oddly confident and genuinely puzzling claim that, "it fits almost every bike." The "cool infographic" with general dimensions does almost nothing to describe the compatibility with different sizes of steer tube or bars in laymen's terms—absolutely crucial information for users who are expected to install this component themselves. 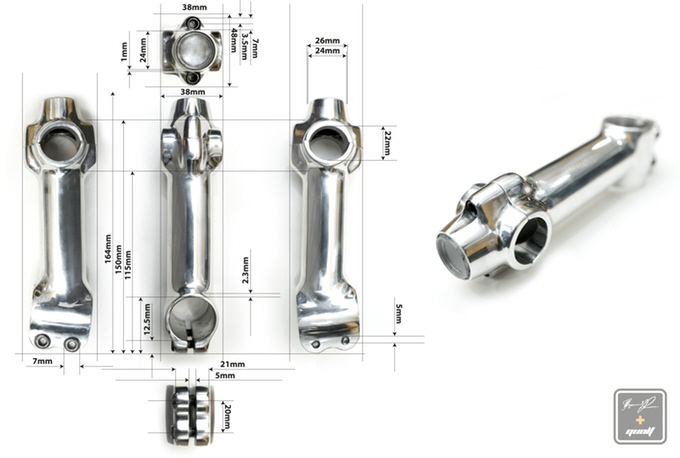 And you "Eco Geeks" are instructed not to worry, because though the Kickstarter campaign is off and running, they are currently looking for a way to incorporate USB charging ability. Not only is "eco geeks" an unpleasant way of referring to people who appreciate responsible design, USB recharge saves your customer money and effort. In an era when you can get a 100 lumen sub-$30 rechargeable light at a modestly stocked LBS, relying on batteries is a sign of underdeveloped market research and underdeveloped design. But don't worry, they're also looking into brighter LEDs! And that's great, but if the light is the heart of your design, don't half ass the light.

This brings me to my favorite part of novice design: the downplaying of well-tested engineering. The stem is a very important part of the bike, and its strength and proper adjustment are vital to you having a nice ride and having teeth at the end of it. By assuming that this stem will fit "most bikes" the designer has already outed himself as unaware of bike subtleties, or totally uninterested in meeting potential users halfway. Installing a stem isn't a stand-alone process, and the ability to do headset bearing adjustment is not fair to expect from a casual rider, especially one put off by the minimally technical task of installing a mass-produced plastic headlight.

By addressing this central component as an easily added accessory, with no structural/fit/adjustment issues of its own, the designer seems willing to compromise the ergonomics and entire functionality of the bike itself for the sake of sticking some LEDs in.

Currently, the only question in the campaign's FAQ asks whether there is any vertical angle adjustment on the light. This is important since the angle of each bike's head tube dictates where the actual beam of the light will hit, and since there's only one stem angle offered, it might not hit where you need it. The answer is no, and so the official Lumineer solution is to over-tighten and under-tighten the bolts on the stem's faceplate to pitch the plate up or down. Not only is that a truly obnoxious way to adjust a light, it also compromises the strength of the stem itself by overloading a threaded system. An over-stressed stem bolt can easily strip, which endangers the security of the bars, and by extension your steering, braking and teeth.

Bike mechanics and design aren't unknowable dark arts, but the layperson buying a bike light intended to simplify a system shouldn't be required to know more than average, and the average still isn't much! If you want to test this, walk your two-wheeled whip into the nearest shop for service and mention that you've "done a lot of work on it myself." If your mechanic looks impressed I'll eat a truing stand.

Can this design be salvaged? Is it more practical than it appears? What would you have done differently?