Just above the office of Tina Roth Eisenberg's startup Tattly is a haven for freelancers that bears no resemblance to the spiritless, sterile co-working spaces around the city. "There are a lot of very non-supportive and really sad co-working spaces", says Eisenberg, "now it's like everybody opens a co-working space and these things turn into moneymaking machines and they don't understand that they need to have the people who are the heartbeat, the soul. You can't just have masses of people walking in and out...That doesn't make it a good space."

A past freelancer herself, Eisenberg was sick of the options available to her: "I looked on Craigslist, and rented out some desks in some really soulless office spaces. I mean first one, I rented out a desk in some Russian computer parts company—don't ask…" So what do you do when you're fed up with what you have in front of you? You fantasize about dream scenarios of course, which is exactly what led to her venture with Friends Work Here. 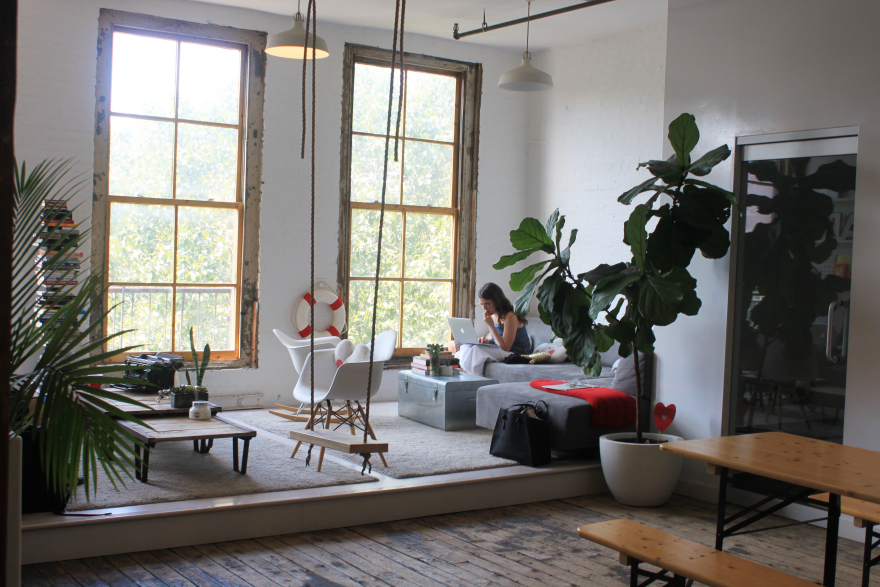 Eisenberg is so passionate about creating a space conducive to great work she looks at her business more like a home full of family—"I don't run Friends like a business… I need to cover my costs, but my ultimate goal is not to make money; my goal is to create what I call my 'happy place', the environment that keeps me creatively excited and stimulated."

So what did we learn after an insightful meeting with such a passion-driven designer and businesswoman? That it takes a lot of heart to make a creative space not just good but great. Here are a few things we picked up from our conversation with Tina: 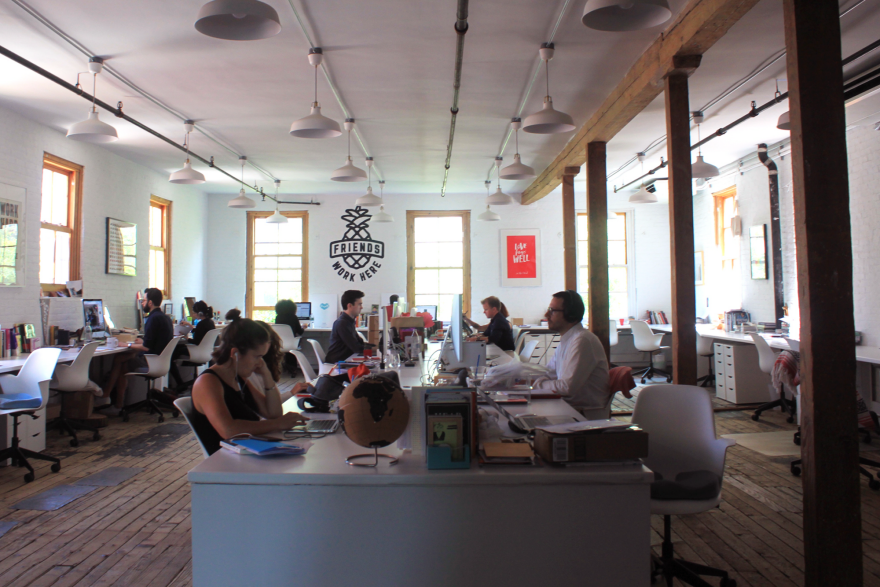 The fact of the matter is, if you want to be constantly inspired you should probably make an effort to surround yourself with the people who inspire you. This is how Friends runs their vetting process for new freelancers to join their group. Eisenberg tells us,

"[Our selection process is] basically like dating. We have people who reach out—we look at their work, first and foremost. I just realized, when you surround yourself around people who have really high standards with their work, you set your standard higher, which is really remarkable. Their goals become your goals, their measures become your measures. So we want to make sure the people are super talented in here. It sounds elitist, but you know, I want to look up to the person who sits across from me. So there's that, and then it just comes down to personality. Like humility: people who are kind, resourceful, helpful. I look at Friends as a community, a very intentional work community."

Shared work space should be about building a community 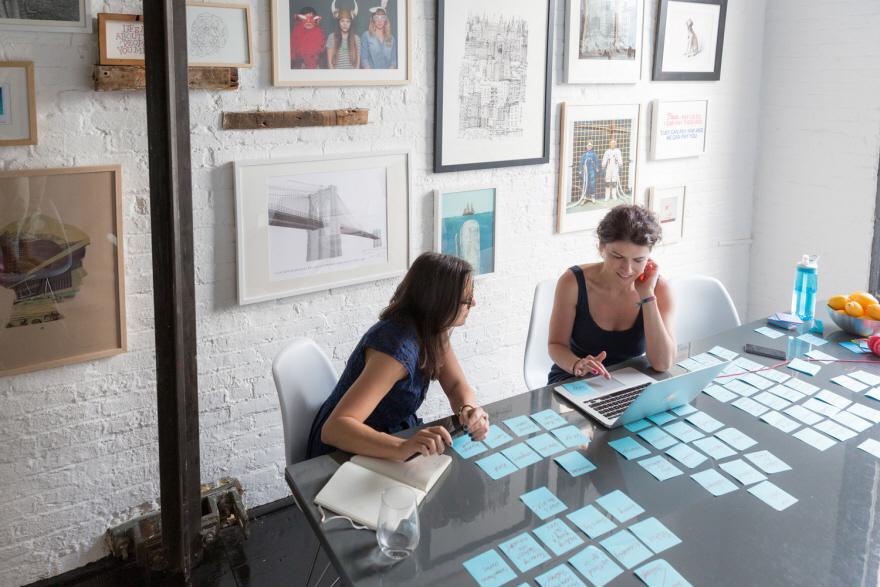 The thing that makes most co-working spaces so stale is their focus on the individual as opposed to harnessing an environment that works to create interactions between individuals working in the space—this is one of the biggest problems Eisenberg saw in previous models. "To me it's about the community," she says, "that's my first goal. A lot of people here who have actually worked in the more well-known co-working spaces, they come here and they go like, 'oh my god, finally a community that looks out for each other.'

The hard truth, as Eisenberg puts it, is that "being a freelancer is terrifying. It really is," and in order to succeed you have to be tuned-in to the community around you that would be receptive to the work you're doing. And from what she's seen, the Friends Work Here founder says this structure really works: "[one of our freelancers] said within two months of working here it paid off. She gets so many gigs just out of being here in this ecosystem. She says she's got more work of this than any other networking… And she feels like she has a home now, you know? So that's cool."

Eisenberg calls it the 'lunch train'— "you know when somebody's like 'hey we're hungry let's go", and then we walk out, we get lunch, and we have lunch together." In her eyes, this is one of the best opportunities for someone in their workday to find fresh new wellsprings of inspiration.

Friends Work Here organizes a potluck at least once a month and Eisenberg swears that it's exactly where the magic happens: "[Lunch is] where I start talking to Tika, who I haven't seen in a while and I'm like, 'What are you working on?' you know, it's just so beautiful. When you work in a company where everybody works on the same thing, it's not as exciting as when I can talk to you and you can tell me about what article you're writing and it's so refreshing to have outside conversations not just within your company all the time."

Help those around you—it pays off in the end

Ultimately a healthy work environment isn't about having a picture perfect space (although it's certainly a perk at Friends Work Here), it's about having a group of people around with a fantastic attitude who willing and able to help their peers. Eisenberg gives a tip on how to maintain a good balance in shared spaces:

"I think I've learned to very quickly nip it in the bud if somebody wasn't kind of part of the value system. Like, if people were arrogant or not helpful, I think I let it slide longer in the beginning, and now I just very kindly—and it just comes from the heart—I pull people aside and say, "hey if you're part of this community, just you know, look out for each other. It's interesting, when you nip it in the bud right away, and also by just showing… We've had some people where I felt like they were [a bit]...entitled? But then they start noticing how kind everyone was, how helpful and how generous and then, you could tell how they were like, "Oh. Oh ok." And that makes me super happy to see that."