Can Design Offer Solutions for the Refugee Crisis?

A roundtable discussion at the 2016 Core77 Conference will examine design's place in offering solutions for complicated, global issues.

Design is about crafting solutions to problems, whatever they may be. It's about more than the aesthetic of homewares and futuristic cars. Design doesn't happen in a bubble, it happens as a response to the events around us. The goal of design is always improvement, to create a better future in whatever way we can. Countless design challenges, ranging from the highly influential Buckminster Fuller Challenge to the student-organized Better World by Design Conference ask designers to consider a design-led, interdisciplinary approach to creating change in the world.

At this year's annual Core77 Designing Here/Now conference our theme explores how design-led co-creation will lead interdisciplinary teams to build successful, game-changing products of our near future.

In a roundtable discussion we'll engage with strategies around designing for the refugee crisis. Three designers will share recent projects that have raised awareness and offered solutions for the growing populations of migrant people displaced by war, regional instability and environmental catastrophe.  The panel will feature Architects for Society founder Amro Sallam, interaction designer and current Orbital designer-in-residence Ekene Ijeoma and designer, Co-Founder and Director of Shared_Studios John Farrace. We take a look at their work below: 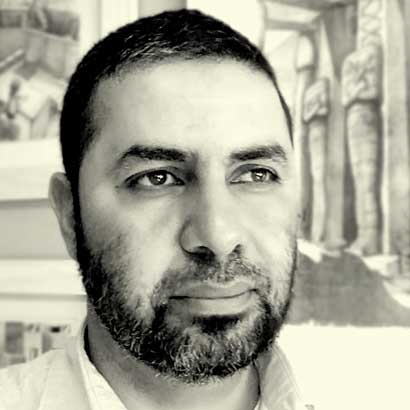 With a Bachelor of Science in Architecture from University of Illinois at Urbana-Champaign and a Master of Architecture from Southern California Institute of Architecture, Sallam has executed a wide variety of projects. In addition to working with prestigious architecture firms Herzog DeMeuron, Switzerland and SOM, Chicago, he is passionate about serving local communities. His community service work ranges from education, youth and community centers across America, to artwork as a vehicle for educating the public about the unharnessed potential of communities living in slum developments and informal settlements.

After close to twenty years of practicing architecture, Amro Sallam's passion for engaging the disadvantaged lead him to found Architects for Society in 2015. Composed of practicing architects from all over the world, the organization seeks to enhance the built environment of underserved communities through the multi-disciplinary collaboration of designers, citizens and policy-makers. The organization's most recent project, Hex House, was a finalist for the 2016 What Design Can Do Challenge.

A configuration of Hex Houses encase gardens and grow community.

At this year's What Design Can Do conference, the organizers challenged designers to address this year's theme of: What Design Can Do for Refugees. An issue too large for individuals, or even an entire government institution, to address, the challenge calls for collaboration and co-creation in order to design enduring solutions that will help refugees and cities positively adapt to change.

The mission of Hex House is to not only provide a cost effective shelter for refugees, but also a dignified alternative home. Shipped in pieces and assembled by users, the structures are modular and can be joined to enhance thermal performance. With a galvanized steel tube base and insulated metal wall panels, the floor and roof surfaces allow room for customization. The solar panels and rainwater harvesting structural elements ensure that the modules provide occupants with as many resources as possible. 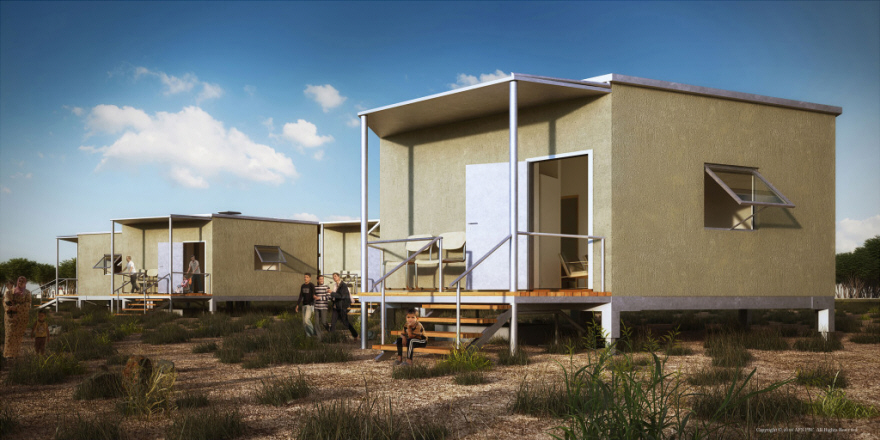 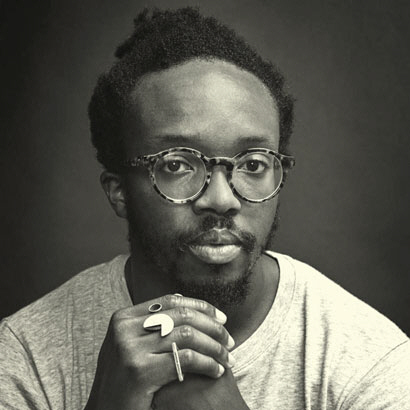 An accomplished interaction and information designer, Ekene Ijeoma uses the combination of visual art and technology to design educational solutions for social issues. With a resume that's surprisingly long for someone who is just over thirty, Ijeoma has worked with Google Creative Lab, IBM, Bloomberg, Wolff Olins and Pentagram, been a lecturer at The New School and New York University, a critic at Yale and School of Visual Arts, a visiting artist at Virginia Commonwealth University and School for Poetic Computation and an artist-in-residence at Fabrica and Ace Hotel. His work humanizes data in a way that feels poetic yet pragmatic. Most recently Ijeoma, who currently works as a designer-in-residence for Orbital, was featured in Good Magazine 'Good 100' 2016 for "tackling pressing global issues." So, what does Ekene Ijeoma actually make?

While he does commercial work, Ijeoma is known for his socially conscious and thought provoking data visualization and interactive platforms. [Editor's Note: Read about Ijeoma's most recent app, Look Up, which was released earlier this week.] Using big data to tell cohesive stories, The Refugee Project, created in collaboration with social impact design agency Hyperakt, provides those of us who feel numb to the numbers, thrown around by mass media, a way to grasp the human reality of the refugee crisis.

As the page loads and years climb, headlines of displacement give context to the circles representative of refugees.

As the years climb from 1975 to 2015, new circles pop up and pulsate, growing as time goes on. The map illuminates patterns of emigration and the context of displacement. Stories of historic turmoil accompany the visual data, allowing the number 35 million to feel a bit more personal. The map gives visual representation to an issue that, for some, feels so intangible. The Refugee Project was featured in MoMA's Design and Violence exhibition, the Design Museum (London) Designs of the Year 2015 exhibition, the Mapmaker Manifesto installation at the 2014 Istanbul Design Biennial and earned a Gold Medal for Interactive at the 2014 Information is Beautiful Awards and a Silver Medal at the prestigious Malofiej 22 Infographic Awards.

Wage Islands at Storefront for Art and Architecture from Ekene Ijeoma on Vimeo.

In addition to the international refugee crisis, Ijeoma's work shines a light on social injustices and problems that for some strike closer to home. In 2015 he created Wage Islands for The Storefront for Art and Architecture. Inspired by the fast food workers' fight to raise minimum wage from $8.75 to $15.00 per hour, the project is an interactive, visual display of income and consequent housing inequalities in New York City. Over 500 pieces of acrylic panels compose a topographical map that, when submerged in blue water on a powered platform, display how a higher minimum wage translates to geographic accessibility. 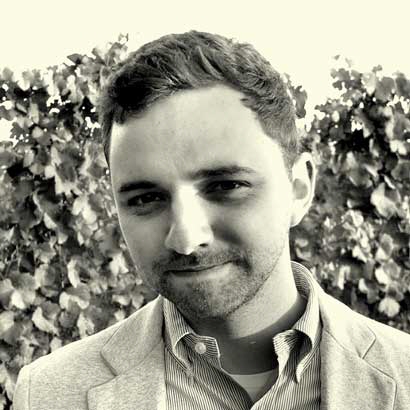 Having earned a Bachelor of Architecture from University of Southern California in 2012 and a Master of Architecture from Yale in 2014, John Farrace's work examines physical boundaries through the intersections of media and architecture. After graduating from Yale, Farrace co-founded Shared_Studios, a design collective whose work is a multidisciplinary approach to combining art and technology.

Standing in the "wormhole," face to face with those across the globe is an otherworldly encounter. 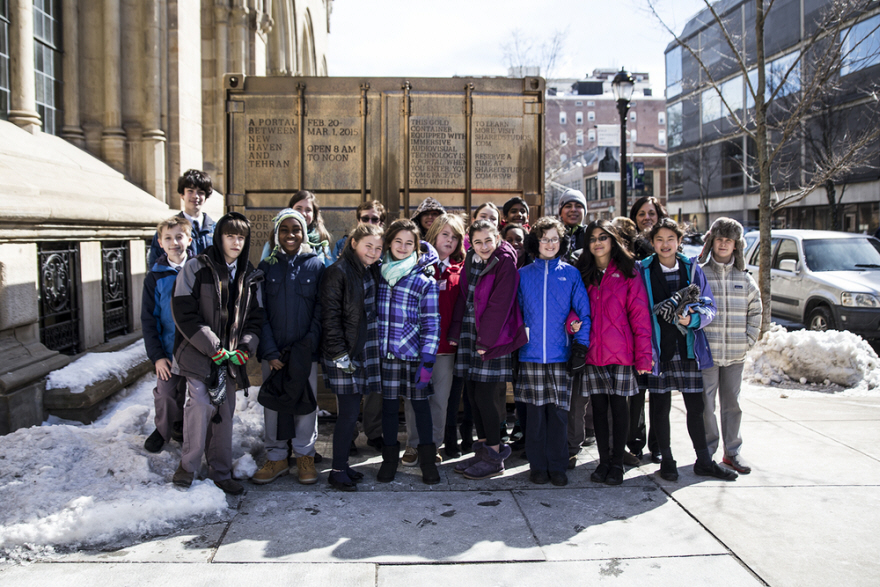 Sixth graders in New Haven, Connecticut visit the Portal to connect with Tehran.

Currently the collective has work on view at the United Nations Headquarters in New York City as part of the Refugee exhibit, which calls for international solidarity in response to an epidemic of human displacement. The work, Portals is part of a global network of interconnected gold shipping containers. Outfitted with immersive audio and video technology, the piece allows visitors to communicate with refugees in camps across the world. Since its launch in 2014, Portals have connected over 13,000 people worldwide in conversation and hosted global events including concerts, public dialogues and classes. The collective "Envisions wormholes throughout the world, carved by an internet you can walk through." New York visitors have a chance to walk through the internet and through the wormhole until September 8, don't miss out.

Learn more about design for refugees at this September's Core77 Conference in Los Angeles. Buy your ticket today!

Can Design Offer Solutions for the Refugee Crisis?