Why Should The NSA Have All The Fun?

If you were wandering around the music, art and technology festival Trailer Park I/O this past week you may find that your conversations are not as private as you think. Touching on one of the festival's key themes of 'Spying Society' and adding a layer of playfulness to the all too relevant topic of surveillance- was Copenhagen's own digital agency Great Works CPH with their project 'I see U.'

From the NSA to Mark Zuckerberg's low-budget laptop camera tapeover—surveillance is a pervasive topic in our modern society. As Great Works CPH Partner, Pia Leichter puts it "The conversation around privacy is over—the illusion has long been shattered." Hence why the agency decided to approach surveillance as the theme of their first artistic project.  I see U is a DIY surveillance kit cooked up Great Works as a response to the technological issues facing not only their clients, but society at large.

I see U combines open source electronics, rapid prototyping and a healthy dose of internet memes to create a kit that helps you eaves drop and match your findings with a representative animated gif. The kit comes equipped with a parabolic microphone, raspberry pi and touch screen, and manual for ease of assembly allowing anyone to spy on their immediate surroundings. The kit debuted at Trailer Park I/O last week with its first open workshop to build the devices and showcase them in action through their interactive installation. The workshop acted as a bit of a testing ground for the Great Works CPH team to see their kit in action for the first time and see the I/O through the eyes of a spy.

In addition to the kit, the interaction installation worked as a running log of the overheard around the festival. Though clever implementation of the giphy API, the floor to ceiling screens populate with gifs pulled based on keywords overheard with the I see U device. As Leichter mentioned in her talk on the main stage of I/O, 40% of people share what they overhear on social media or blogs. Examples ranging from "just throw some bacon at the problem" overheard at Whole Foods to overheard at Trailer Park I/O: "I could be catching Pokemon right now." 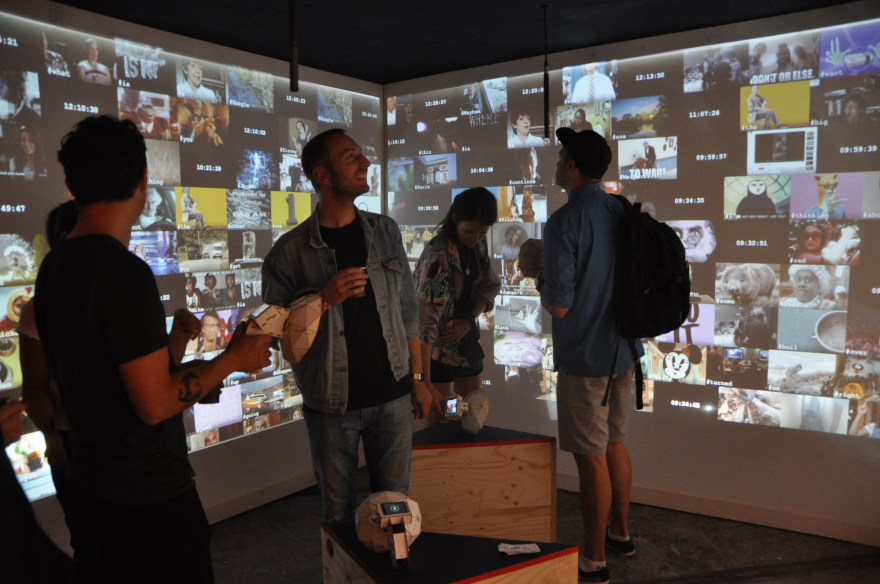 Attendees of Trailer Park I/O enjoy the gifs generated from overheard conversations around the event.

This is the first time the Great Works CPH team has toed the line between their digital work for the agency and artistic passion project. The decision to not only tackle such a heavy topic but infuse it with unmistakable maker vernacular of laser cutting and Raspberry Pi gives the entire project a lightness leaning more toward LOLcat than Wikileak.

In the playful world of memes, gifs, cats, snaps, emojis, wows and likes, it's easy to forget what we do and share is being collected and distributed by governments and corporations. Companies provide 'free' services in exchange for our data – what we eat, how we feel, where we go, what we say, our photos, faces, families and friends, which are all monetized, profiled and shared. We have the right to know how, why, where and by whom." - Christian Langballe, Partner at Great Works CPH

Still, I see U makes a very relevant point about democratized surveillance. As Leichter puts it "surveillance is the business model of the internet" - an concept particularly chilling when you consider the World Economic Forum's projection that by 2025 over 50% of internet traffic will come from home appliance and devices.

The Great Works CPH team is taking pre-order requests and will look toward open sourcing the plans for the device as well as going into small batch production in the next months.

To learn more about their project and vision for the future of democratized and DIY surveillance check out their website.