This is the latest installment of our Designing Women series. Previously, we profiled the prolific French designer Charlotte Perriand. 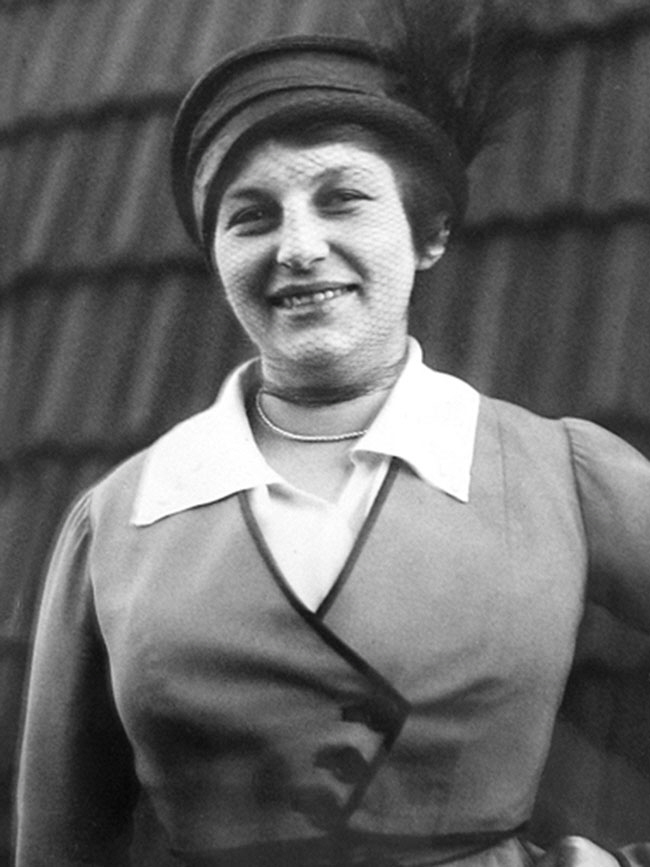 Although she studied with Josef Hoffmann and the Wiener Werkstätte in 1908, Lilly Reich went on to develop austerely modern designs that bore little similarity to the decorative styles of the Viennese movement. Which is not to say that Reich rejected Hoffmann's focus on craftsmanship—far from it. In 1920, she was appointed to the Deutscher Werkbund board of directors, becoming the first woman to help lead the German association of craftsmen. The group advocated for superior design and craftsmanship in mass-produced goods, and in support of that mission Reich organized a number of exhibitions showcasing German product design. Her exhibition designs established her reputation in German design circles, and from 1926 to 1939 she and fellow architect and Werkbund member Ludwig Mies van der Rohe had a close working relationship. Although they kept separate design studios, they collaborated on furniture, exhibition and interior design and "exchanged artistic ideas constantly," according to scholar Christiane Lange. Not surprisingly, however, Reich never became as well known as her famous male collaborator (an all-too-familiar story in this column). So, in an effort to tip the scales a bit, here are five things you might not know about Lilly Reich's long and varied design career: 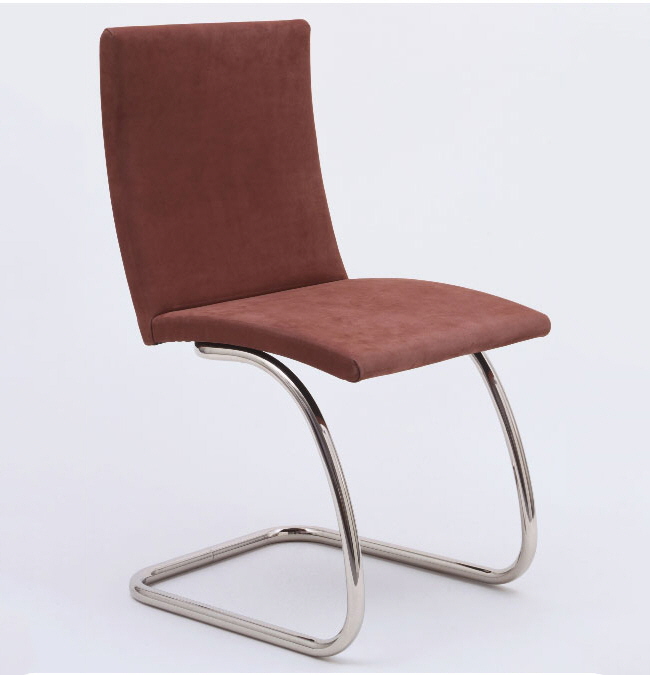 Reich's tubular-steel cantilever chair (LR120), from 1931. Image via the Museum of Modern Art

1. She got totally tubular

Like many European modernists working in the late 1920's and early '30s, Reich had a strong interest in using new industrial production techniques and materials. She is credited as being the only woman at the time to design a full series of furniture made from tubular steel (although Charlotte Perriand was undoubtedly also a master in this field), which was manufactured and sold by Bamberg Metallwerkstätten. Her designs included bed frames, chairs, tables and daybeds, and she combined wood and tubular steel to great effect, as seen in her elegant 1931 Garden Table (LR500). 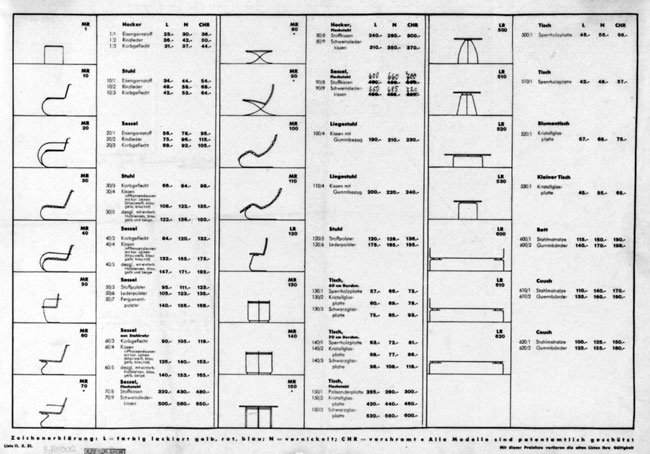 Tubular-steel furniture designs by Reich and Mies, as shown in the 1931 price list for Bamberg Metallwerkstätten. Reich's designs are indicated by model numbers that begin with "LR." 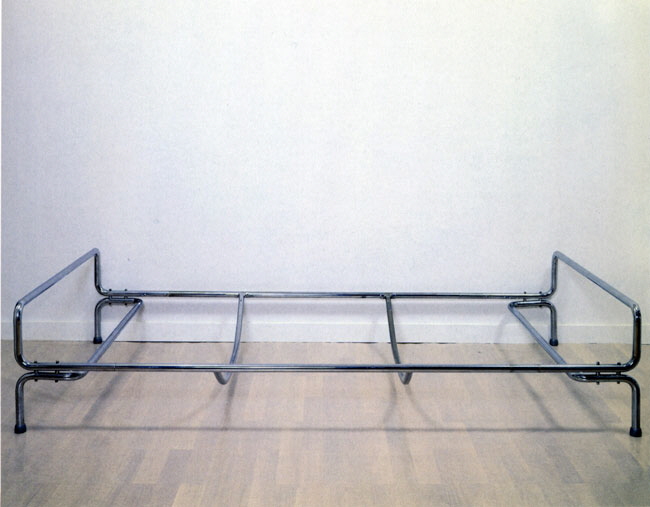 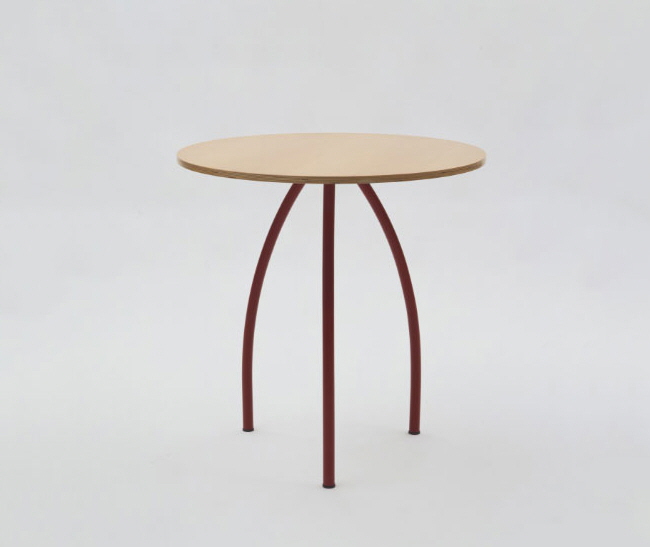 A reproduction of Reich's 1931 Garden Table (LR500), which combined wood and tubular steel to great effect. Image via the Museum of Modern Art

2. One of Mies's most famous designs might actually be hers

As with many of design's great collaborations, there has long been speculation over Mies's and Reich's individual contributions—and it's no surprise that history has played out in Mies's favor, with Reich's influences being largely overlooked. This may especially be the case with one of Mies's classic furniture pieces, the Barcelona Couch, which is still manufactured today by Knoll. Although Knoll does not credit Reich, many believe she was at the very least a co-designer if not the actual author. Tracing the daybed's original design back to an apartment in Berlin that Reich and Mies designed together, Christiane Lange points out that "the daybed Reich designed for the Crous apartment in 1930 is the first model of the daybed on tubular steel feet, which became one of Mies van der Rohe's most famous pieces of furniture after the Second World War." 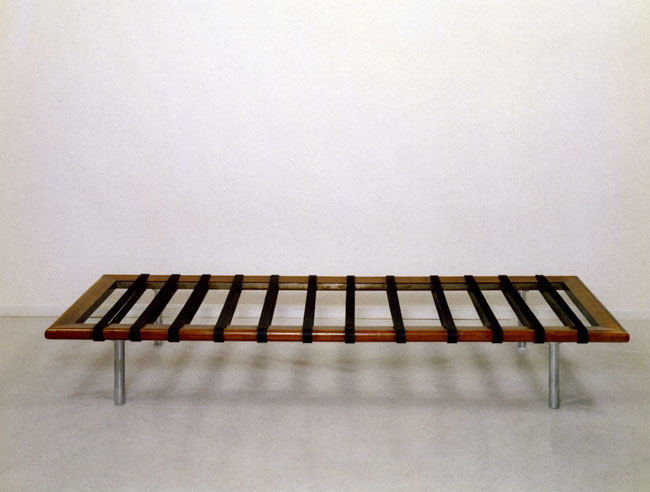 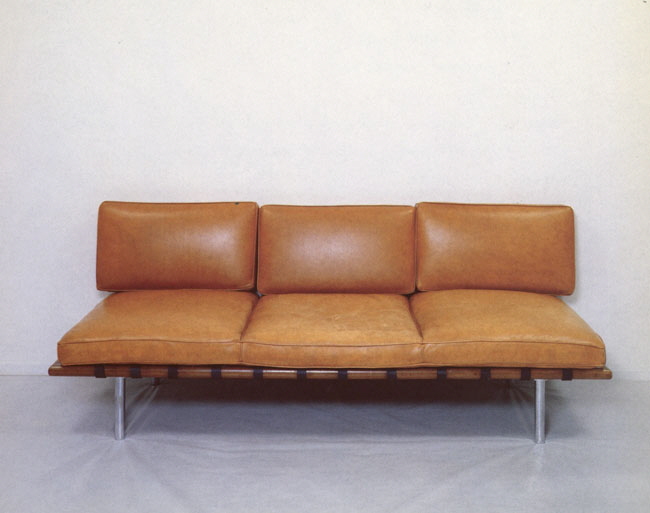 Reich's original design for the apartment's daybed had individual back cushions and a divided seat cushion. 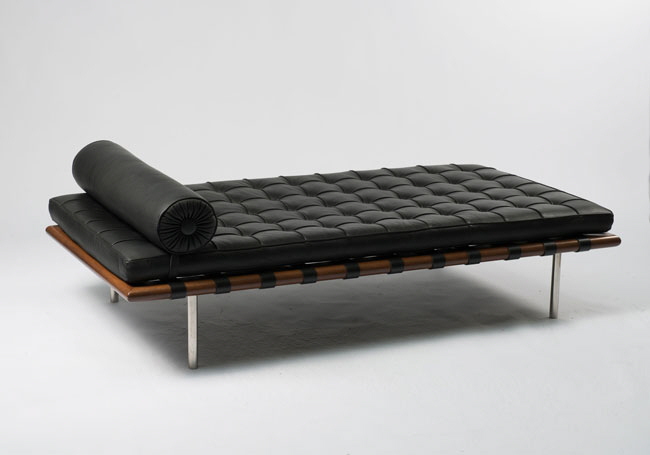 In 1930, Philip Johnson commissioned Mies and Reich to redesign his apartment in New York; they installed a version of the daybed, this time with a bolster pillow and tufted cushion, as part of their furnishing plan. It is now marketed by Knoll as a Mies design; however, its true author may actually be Reich.

3. She made her mark at the Bauhaus

In January 1932, two years after Mies was appointed director of the Bauhaus, Reich joined the school and took over instruction in the weaving workshop and also the interior finishings department, which included cabinetry, metalwork and wall painting. Her position as a master (or head instructor) was significant, because she was only the second woman to hold that title since the school opened its doors in 1919. And according to Adrian Sudhalter's chronicle of the school, Reich "also manage[d] much of the daily administration of the Bauhaus for Mies" during this time. Her tenure was short-lived, however, as Nazi officials forced the Bauhaus to close in the summer of 1933. 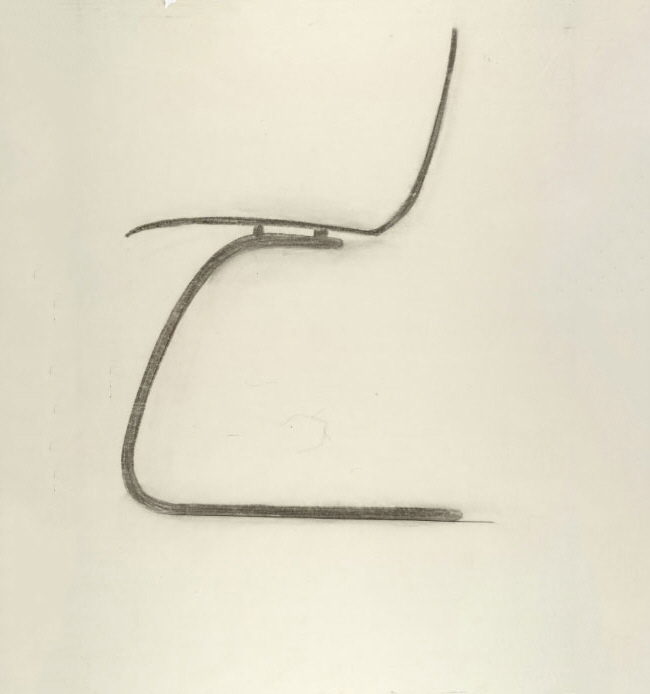 A Reich sketch for her LR120 tubular-steel chair, saved in the Lilly Reich Collection, Mies van der Rohe Archive at the Museum of Modern Art

4. Architectural historians owe a debt to her good instincts

During World War II, Reich had the foresight to box up 3,000 of Mies's drawings and 900 of her own, giving them to her friend Eduard Ludwig to hide in his parents' home in East Germany. Her good instincts saved their records from certain destruction in Berlin, which was bombed heavily by Allied forces. (Indeed, the documentation that Reich had held back with her in the city was destroyed in 1945.) Although the drawings were inaccessible for decades after the war, Mies was finally able to negotiate their release from the Eastern Bloc in 1964. Just before his death in 1969, Mies donated the trove of drawings to the Museum of Modern Art in New York, ensuring both of their legacies. 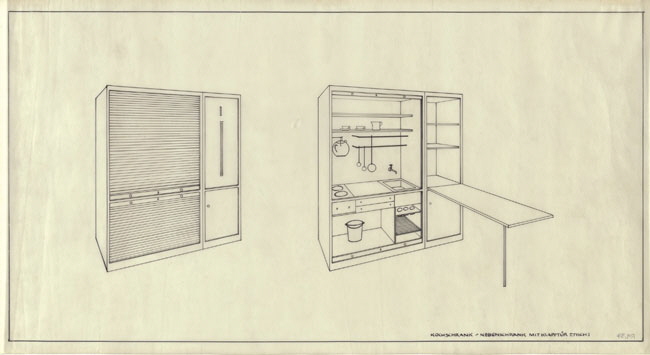 A drawing for a cooking cupboard that Reich designed for the 1931 German Building Exhibition, The Dwelling in our Time, in Berlin. Image via the Museum of Modern Art

Much like fellow Bauhaus designer Marianne Brandt, Reich decided to stay in Nazi Germany instead of fleeing as many of her male colleagues did—and profoundly hindered her career as a result. "I have had a few smaller jobs, but now again there is nothing," Reich wrote to a colleague in 1935. "It is not a pretty situation, but we are so helpless to change it." During the war she was conscripted into a military engineering group and would later work in the office of architect Ernst Neufert. Throughout this time she would also tend to Mies's business matters in Berlin (he left to teach in Chicago in 1938). Despite her best attempts to continue her own office, her illness and death in 1947, two years after the end of war, meant that she would never have a chance to fully revive her own practice. 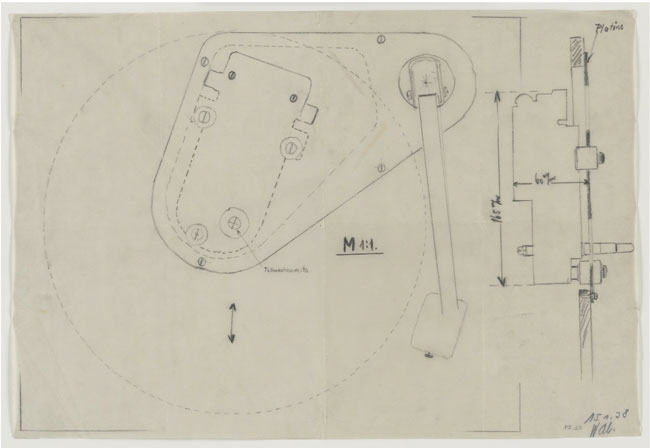 A later design by Reich for the Telefunken Record Player, 1938. Image via the Museum of Modern Art 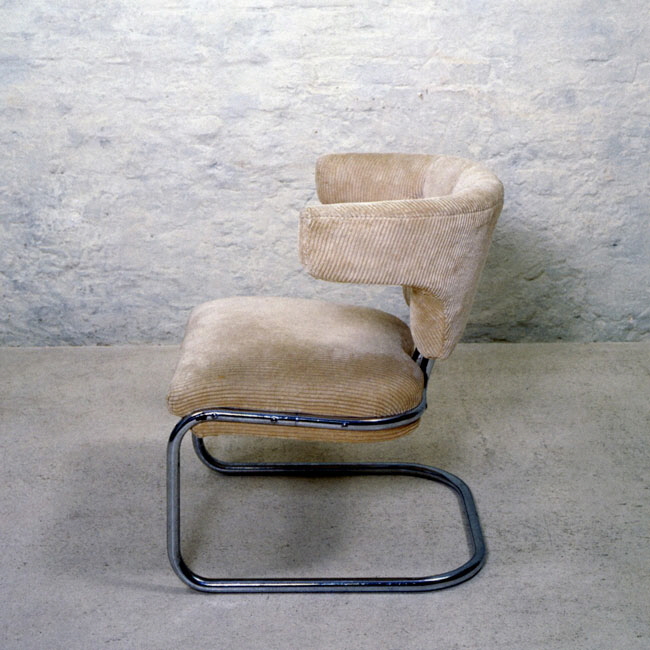 Tubular-steel chair LR 36/103, designed by Reich between 1936–1938 and used in the Crous Apartment in Freudenstadt, Germany

Bonus: Andy Warhol would have loved the beer exhibit Reich and Mies designed in 1929 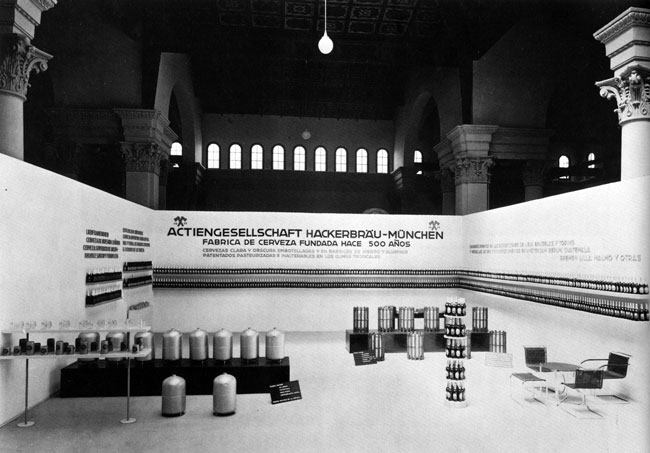 Three decades before Andy Warhol lined the walls with his Campbell's Soup Cans canvases, Reich and Mies brought a Pop Art sensibility to their design for the Hackerbrau beer booth at the International Exposition in Barcelona, proving they were aesthetically well ahead of their time.