One degree of separation: how Clement Meadmore connected me to an iconic design

Reading Joel Moskowitz's recent piece on building flatpack furniture reminded me of my first encounter with plywood furniture that could be built with a minimal number of tools. I had been given a book called How to Make Furniture without Tools, which contained designs for simple but functional tables, chairs, cabinets, and beds. 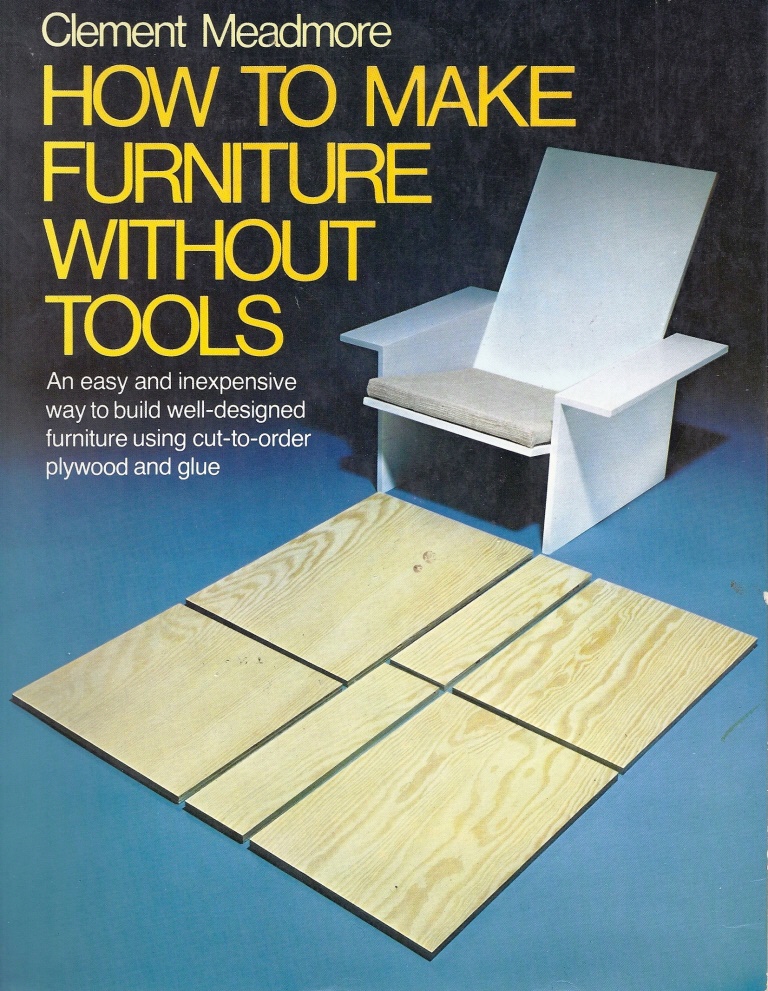 Published in 1975, it was written by Clement Meadmore, a famed Australian metal sculptor who was greatly interested in modern furniture. The book stood out for a couple of reasons, the furniture could be assembled without tools and each design utilized 100% of a sheet of plywood.

The only waste was the sawdust generated while cutting the pieces—which would be done at the lumberyard on a vertical panel saw. This was before the era of the big box store, when the neighborhood lumber yard would cut plywood and sheet goods for a nominal charge. 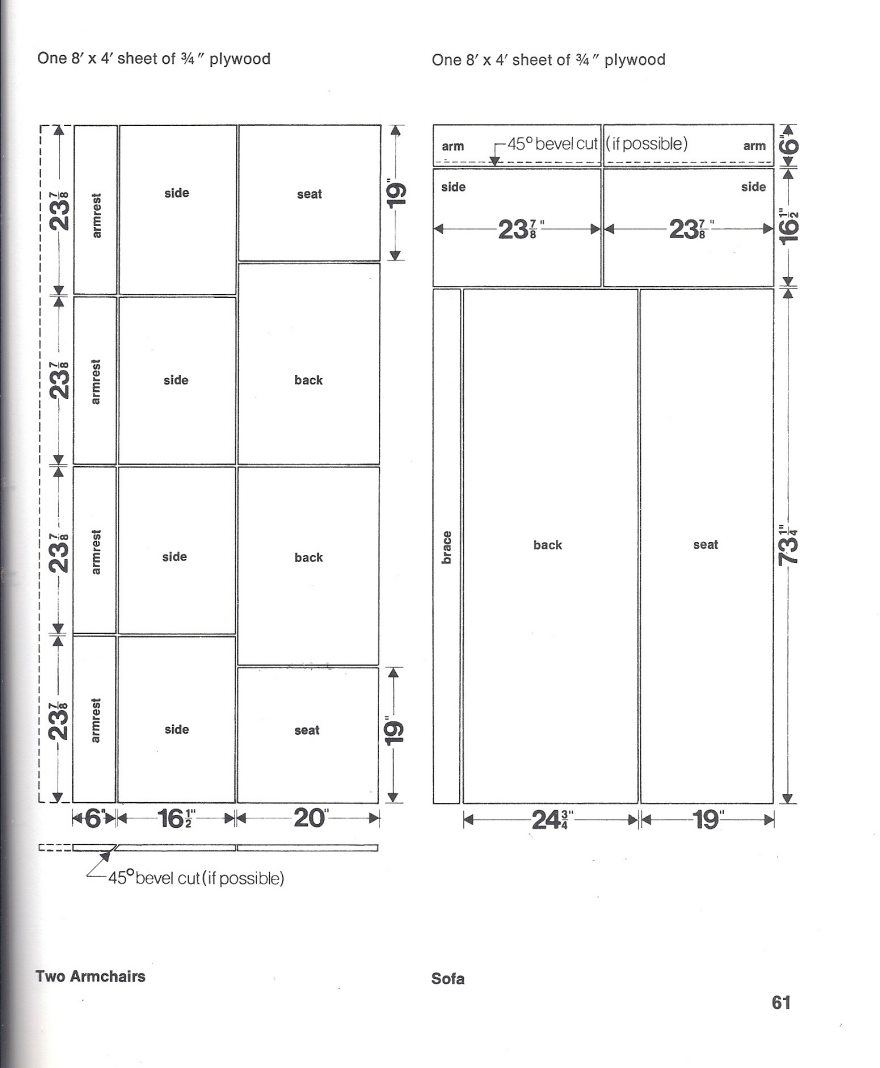 Each design included a cut sheet that could be taken to the lumberyard. On the left are two armchairs; on the right a couch that is a longer version of the same.

I was a novice woodworker and did not know much about building furniture, but could tell Meadmore knew even less. And that was fine, because I was more interested in learning the dimensions and proportions that worked for furniture than I was in using Meadmore's methods of construction. He said to assemble the pieces with butt joints and carpenter's glue, and to weight the joints in lieu of clamping. 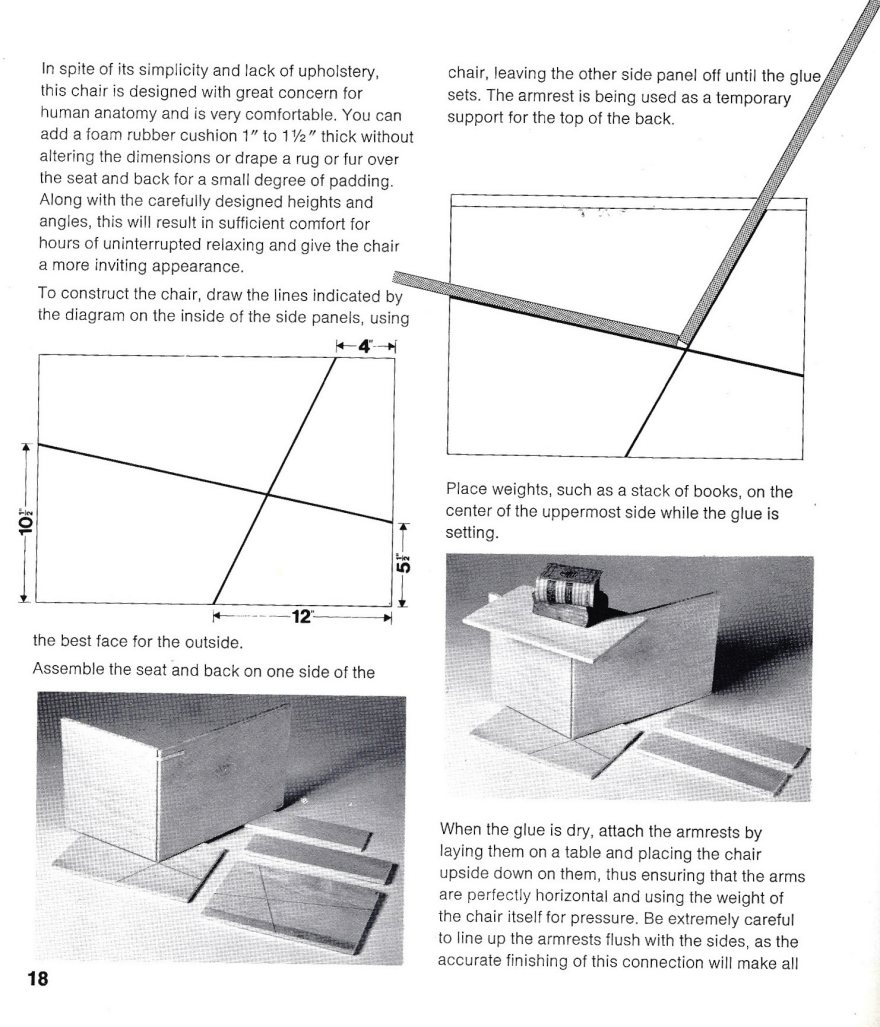 Carpenter's glue is great stuff, but not for a butt joint, which in the absence of fasteners or joinery (dado, mortise, biscuit, etc.) is terribly weak. Meadmore probably knew better but it would have spoiled the title of his book to call it How to Build Furniture with a Hammer. When I built his designs I nailed and glued or screwed the joints. If I were to build it today I'd probably use biscuits and/or pocket screws—or with interlocking thru joints if I had access to a CNC machine.

I thought of this furniture as disposable, using it for however long I needed it and then taking it apart and reusing the plywood. Over a period of years I built platform beds, chairs, and tables based on Meadmore's designs—doing my own cutting and altering dimensions and details to suit my needs. 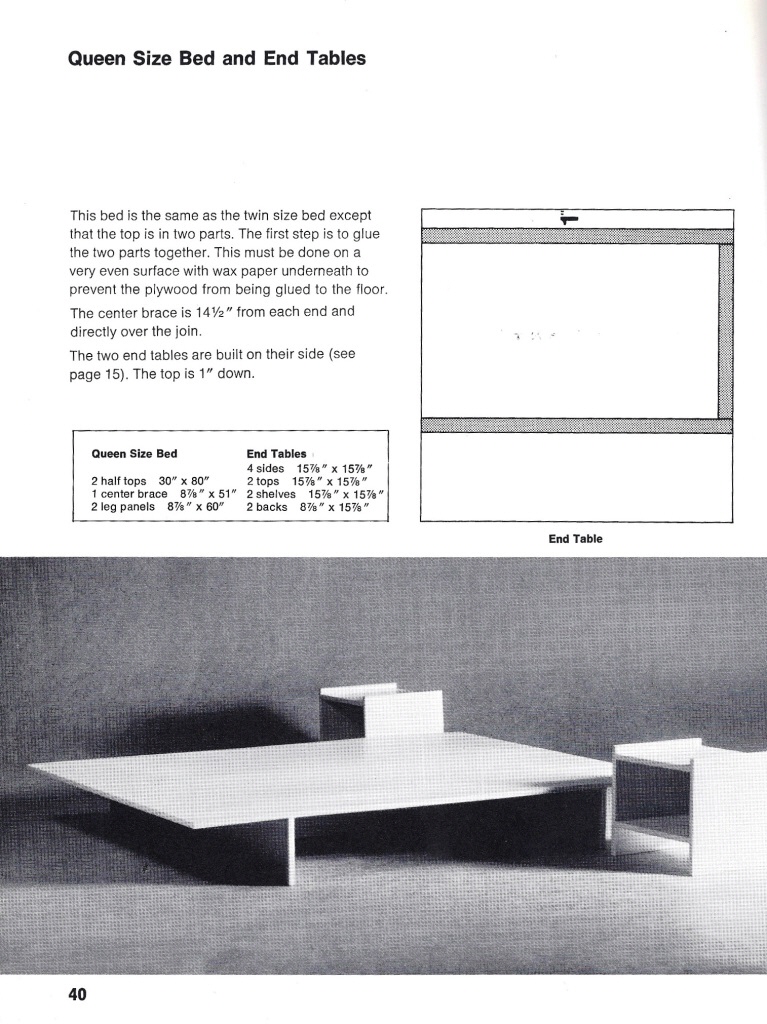 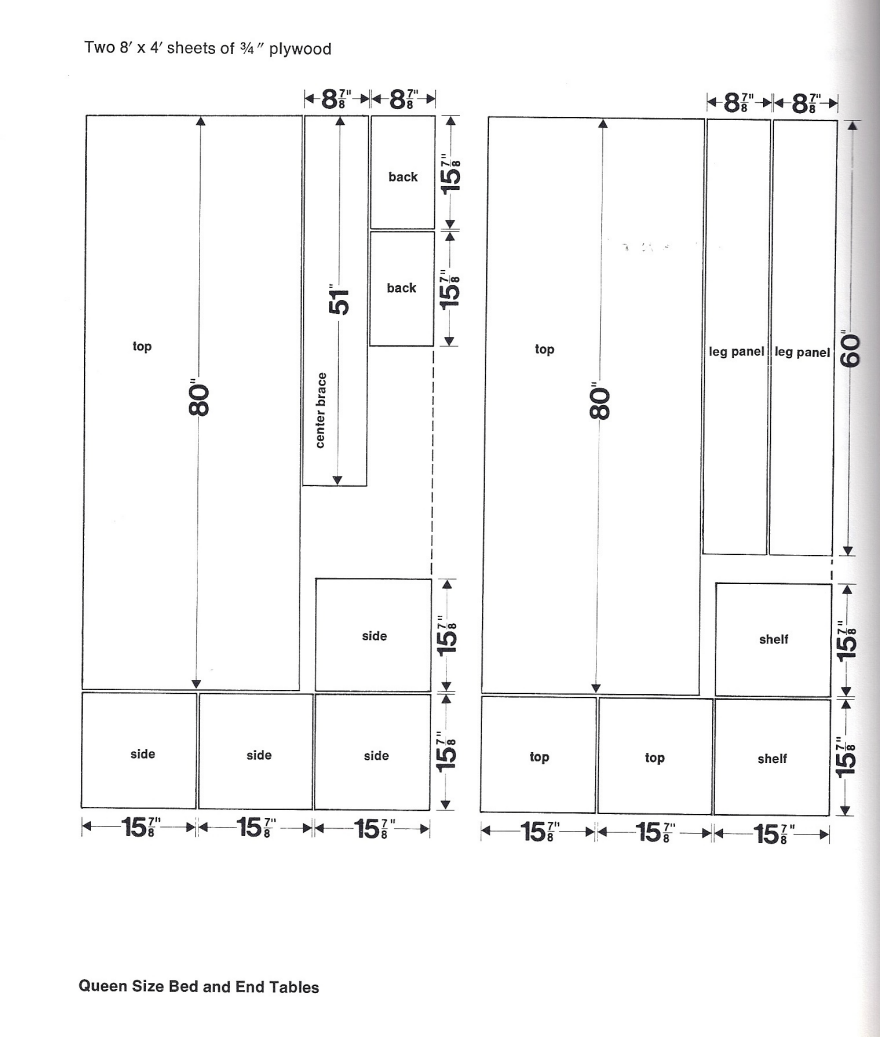 I built several versions of the arm chair on the cover of the book, which with its low seat, sloped back, and wide arms reminded me of the Adirondack Chair patented in 1905. My favorite modification was to widen and brace one or both arms so they functioned as built-in side tables. 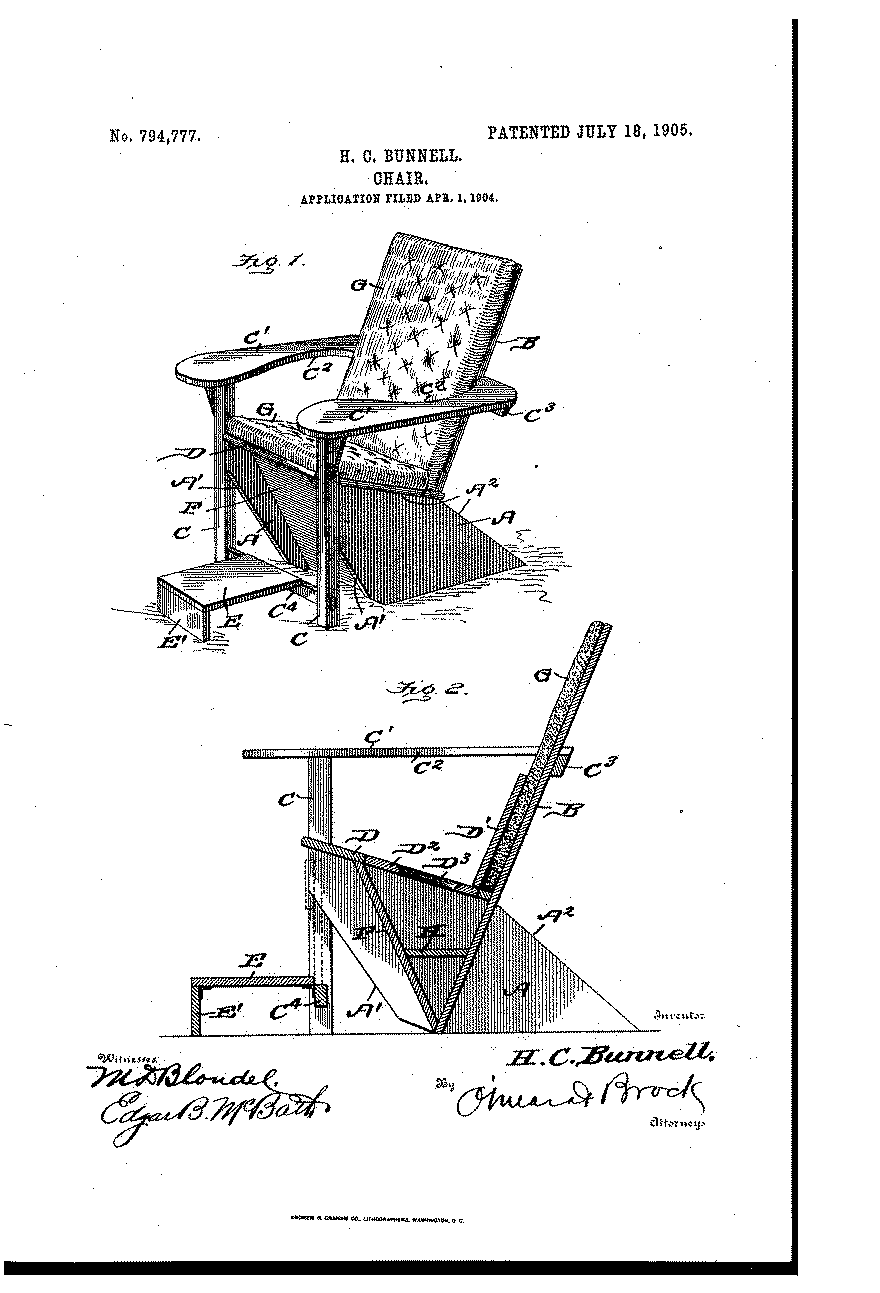 This isn't the earliest Adirondack Chair, but it's the first that was patented.

It wasn't until years later, during a trip to NYC, that I discovered the source of Meadmore's design. I was at the Museum of Modern Art's permanent furniture collection when I saw a colorful chair with the shape and proportions of the one I had built so many of. It was Gerrit Rietveld's iconic "Red-Blue" chair. Designed and built in 1918, the original was made from unstained beech. Rietveld later produced versions that were painted or stained black or white. It was not until 1923, when inspired by the work of fellow Dutchman Piet Mondrian, that he painted it red, blue, yellow, and black. 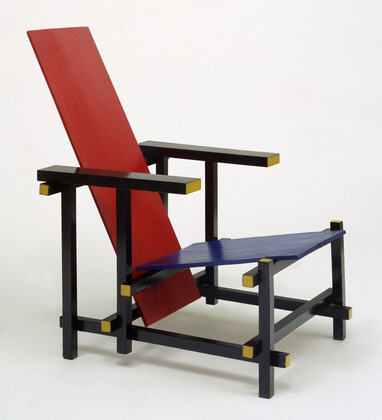 The chair was intended to be mass produced but was never produced in anything more than small batches. I have no idea how many such chairs were made at the time, but the design continues to be produced to this day. Google "Rietveld Red-Blue Chair" and you'll find all manner of originals, reproductions, kits, and construction plans for sale. 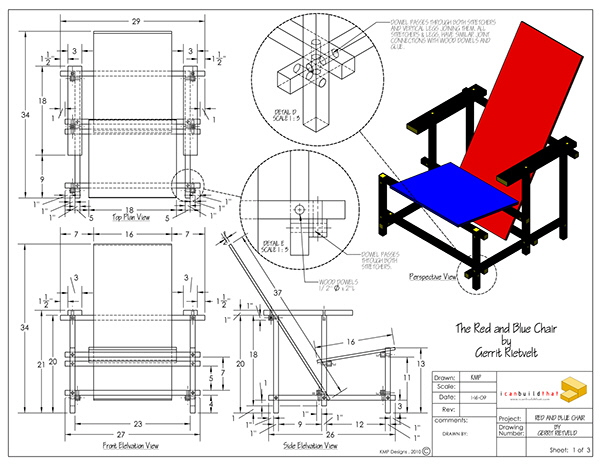 And that leaves out all the designs inspired by the original—like ones made from Lucite or ones where some of the pieces are turned on a lathe. Design Within Reach sells a miniature display version of $290, which strikes me as funny because for that amount you could buy the material to build a dozen Meadmore chairs.

I've never sat in a Red-Blue Chair but can tell by looking that the flat unpadded seat would be uncomfortable to sit in for long periods of time. Meadmore's version included a pathetically thin seat pad. I put an old couch cushion in mine. 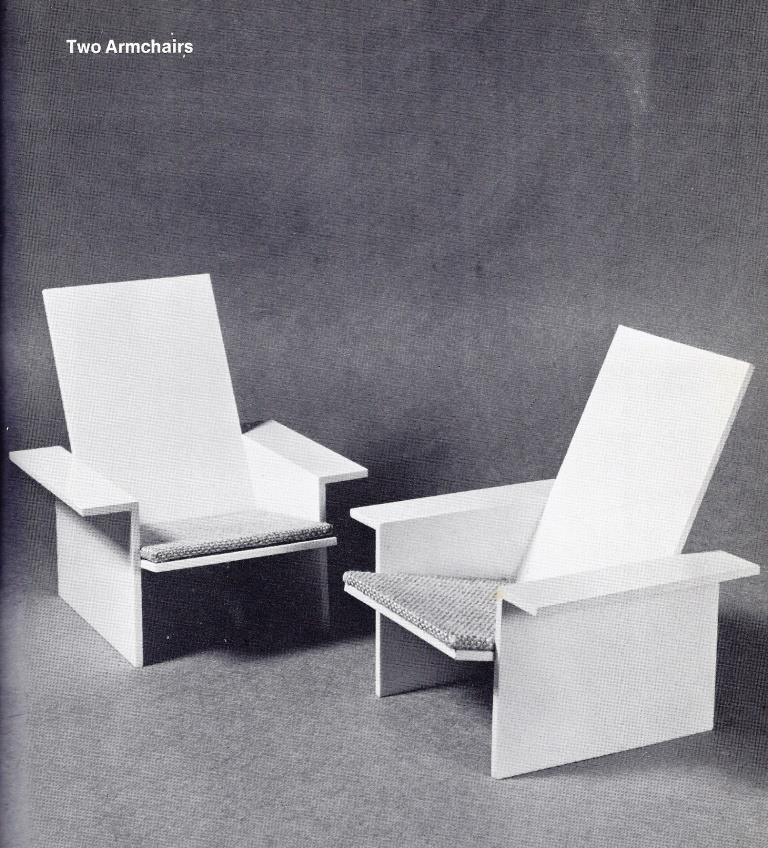 Meadmore's proportions were comfortable but the chair would have benefited from a thicker bottom cushion and a cushion--no matter how thin, on the back.

Friends use to scoff at the looks of my chair, until they sat in it and found out how comfortable it was (with a padded seat).It has been years since I recycled the plywood from my last Meadmore Chair but I remember the design fondly, as it got me started at building furniture and unwittingly gave me a connection to Gerrit Rietveld.