If you think this exhibition is not for you, it probably is...

By Bruce and Stephanie Tharp - May 29, 2017
Discursive Design | Exhibitions

The closing of the exhibition, Climactic: Post-Normal Design late last year, marked an important step forward for discursive design. The curatorial team of Ahmed Ansari, Deepa Butoliya, and Katherine Moline created the most intentionally global representation of discursive work to date. Designers from Brazil, Japan, US, Britain, Australia, Mexico, India, China, Kenya, Pakistan, The Netherlands, and Denmark presented work beneath the rubrics of Climactic Change, Speculative Anything, and the Anthropocene. The curators' goal was to "engage audiences in thinking about the precarity of the age we currently live in, a precarity not in some small part due to the contemporary practices of design."

Climactic: Post-Normal Design is actually the fourth iteration of a series of exhibitions and symposia that Katherine Moline initiated in 2014 as part of the project, Feral Experimental: New Design Thinking, at the University of New Wales in Sydney. Through her connections with Carnegie Mellon's former Director of Design Studies (Cameron Tonkinwise), CMU's PhD students in Transition Design were able to help curate the show as well as its accompanying workshops and discussions with emphasis on the crucial problems of our times—e.g., extreme weather, forced migration, and certain implications of neoliberal politics. 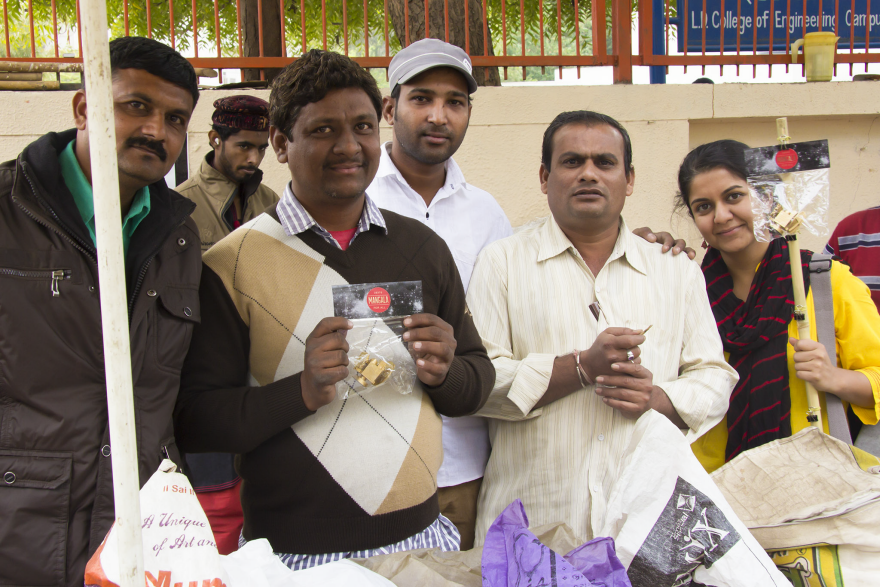 Mangala for All (Ongoing) by Superflux (Anab Jain and Jon Ardern)
"Mangala for All explores India's space ambitions within the context of global (meta)geopolitics and the commercial space industry. Mangalyaan, or the Mars Orbiter Mission (MOM) is an Indian spacecraft orbiting Mars since 24 September 2014. To coincide with the launch of Mangalyaan, or the Mars Orbiter Mission (MOM), Superflux launched Mangala For All, a reflexive ethnographic performance in the streets of Ahmedabad, India, where they offered participants a Mangalyaan Miniature in exchange for insights into what Mangalyaan and the Indian Space Program means to the people of Ahmedabad. Stories of jugaad, scientific innovation, resourcefulness and creativity in Mangalyaan's success were entangled with assumptions about its impact on people's hopes and aspirations, as well as the subtexts of nationhood, geopolitics and the space race. Superflux asked whether Mangalyaan was an act of nation building, or a symbol of progress and development? Was it the Indian elite's delusional quest for superpower status, as economist-activist Jean Dreze has commented, or a way 'to dislodge the perception of India as a developing nation, by showcasing spectacular technology'?"

But most importantly, they challenge the glaring under-representation of non-western design voices and the global citizenry that is subject to the consequences of the dominant neo-colonial powers (think where all the e-waste goes, for example). The exhibition unabashedly implicates business as usual, regarding the West's producers (and implicitly, the consumers)—"Often structured uncritically around the logics of coloniality at the foundations of the modern world-system, the design disciplines exist to uphold hierarchical structures that maintain the status quo of racist, sexist and class distinctions." This follows the "reflexive turn" than anthropology and other social sciences went through in the 1970s.

While their brash stance may seem somewhat unsettling, that is exactly the point. Reflecting the tenets of Transition Design, the curators come from a philosophical place where human and environmental justice demands immediate action–tough times demand a tough approach. If you think their message is not for you–and it does not resonate, then it probably is, and should.

What makes Climactic so weighty is not just the exhibition itself, but the surrounding range of activities—the gallery talk, workshops, catalogue, and panel discussions. This is the true spirit of discursive design, where designers/curators are interested in stimulating and actively participating in broader discourse. Too often designers claim to care about their topics that their designed artifacts carry, but they do little beyond posting images on their websites and hoping for some media attention. Frankly, this is lame. If discursive design is fundamentally about communicating ideas and stimulating intellectual awareness, then active strategies of dissemination should be considered as part of the proposition. The Climactic team accomplished this, bringing forward issues that barely see the Western light of day. 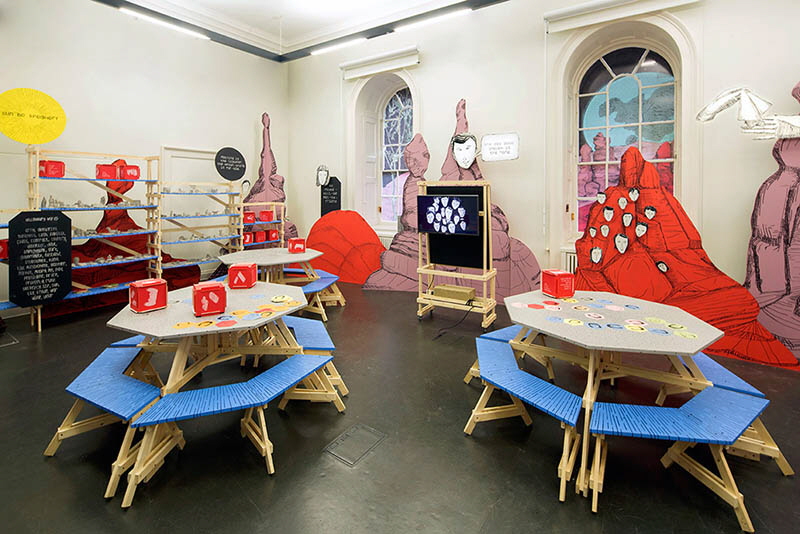 Night School on Anarres: Imaginings of an Anarchist Utopia (2016)
Onkar Kular and Noam Toran with Nestor Pestana
"Night School on Anarres was a temporary school examining utopian proposals of twentieth-century anarchism. Drawing from Ursula K Le Guin's seminal sci-fi novel The Dispossessed, and focusing on her construction of the fictional anarchist planet Anarres and its language Pravic, children and members of the public were invited to participate in language and social studies classes. Part sci-fi set, part classroom, part roundhouse theatre, the Night School on Anarres installation was a site where utopic ambitions could be collectively imagined, performed and discussed. Through novel pedagogic approaches, the installation invited participants to learn about the planet's language, customs and behaviours. In so doing, the project encouraged visitors to reflect upon current socio-political models with the hope of collectively imagining alternatives."

When you think of discursive design, you likely conjure up the RCA and the topics, aesthetics, and approaches that are presented and valorized in the media. But it is a big world with other voices that have a tougher time being heard. It is naïve and unfair to just assume that everyone is free to speak—the reality is that existing systems and politics make such equality of access and acceptance a true design fiction. How does a Pakistani perspective, for example, get communicated to the world when dominant design agendas, aesthetic canons, and access to gatekeepers create road blocks—unintended or otherwise? The Climactic exhibition gets other voices and actors on stage—and we from the privileged West and/or Global North, should lend an ear.

If we dare to do more than passively listen however, we should also be actively encouraging and engaging with such broader viewpoints. Discursive designers are understood to have assumed particular roles as social critics, provocateurs, and visionaries with a broader, valuable perspective than what mainstream culture offers up. Discursive designers claim to see the bigger picture and to champion alternatives through questioning, for example, emerging technologies, established cultural institutions, and status quo politics. But what about envisioning and provoking beyond the vantage of the West, and helping to support a more global community of discursive design practice (or just a broader community in general)?

Easier said than done, of course. But it seems somewhat hypocritical for discursive designers to remain on the sidelines once aware of the game, or the rigging of the game. Certainly, designers have a broad range of discourses to work with, and they generally choose the ones they most care about. But perhaps they/we should be caring more broadly. Perhaps the discourses about our own more local communities should open up and acknowledge more global realities—like neo-colonialism, for example.

Rather than merely commenting about how augmented reality devices might disrupt our existing social norms, might we also think through the other possible—more global—disruptions, like whose natural resources get strip mined and who lives with the pollutants after the West has had their way with them? Perhaps Western discursive designers might set aside the discourses they are naturally most interested in, or those that are closest to them, and consider what other discourses their Western audiences could or should be exposed to. If discursive designers indeed see above and beyond that status quo, then why not call into question a more global status quo? 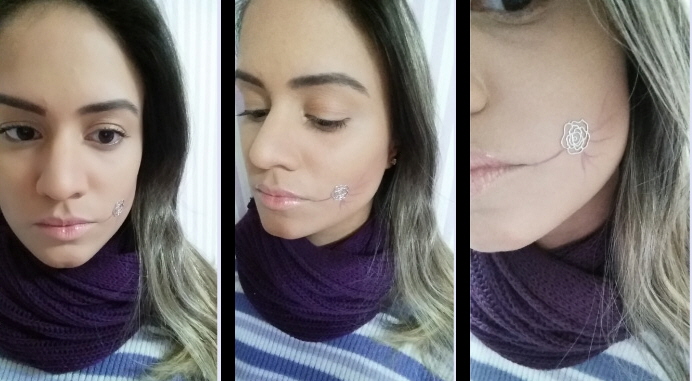 Design in Times of Crisis (2014-2016) Luiza Prado & Pedro Oliveira
"The project Oniria examines how a few extremely conservative, anti-birth control bills that have gained traction in the Brazilian House of Representatives could affect what kinds of contraceptive technologies are accessible to Brazilian citizens, and the project considers the impacts that these bills may generate. With the initial premise that if the laws were passed by government, other kinds of contraceptives that comply with these laws would be developed and released. Prado and Oliveira question what kinds of contraceptive strategies will be implemented in such a strict and conservative scenario, and how will people respond to this. A written narrative describing the scenario of anti-birth control bills, and the promotion of a product, Oniria, was developed. This product was accompanied by a marketing strategy that encouraged make-up trends as marks of gender and sexual identities."

This, too, may be easier said than done (well). A common and apropos criticism of discursive designers is that too often they do not know enough about the discourses they present. They are seemingly naïve and not fully aware of the complexities and competing perspectives at play. What we are suggesting is a broader awareness and understanding, which takes work to achieve—these are ideas and issues that are not usually present in the design studio. Designers need to engage more deeply with other domains of knowledge, taking more of a critical studies approach to their topics.

This is complex stuff that unfortunately lies beyond traditional design education. So for the time being designers need to work more diligently to unpack these topics. What we tell our students is that if they cannot effectively argue against the ideas that their work espouses or that they wish to espouse, then they need to go back to the books or engage with experts.

If discursive design is fundamentally about communicating discourse, then rather than spending all those hours sanding, painting, and priming models, might that time be better spent in the library or consulting with professors or knowledgeable others? Might designers be more discriminating about residual commercial design expectations that do not best contribute to discursive design's ultimate goals? What is the minimum viable discursive design object that can carry the weight of the discourse?

Discursive design may be nearing a tipping point, at least that is Climactic's hope. The curators have done the hard work of identifying a broader range of designers and voices, and the discursive design community should take note. And as for us, we intend on highlighting more of this work throughout the year to help support the Climactic aims of shifting "design debate from thinking about progressive design objects to reflecting critically on the design processes that exclude most of the world's population from the debate."

If you know of under-represented discursive design (speculative design, critical design, design fiction, etc.) work for possible publication on Core77, please contact us or leave a comment below.