A Behind the Scenes Look at the Harry Potter Themed Festival, Wizarding Weekend

Commonly touted as one of the best college towns—or places to retire—Ithaca, NY has had its fair share of press. Until last year, it was not considered a Harry Potter mecca. However, the surprising success of a community-driven, themed weekend in 2015 quickly changed that.

Developed and launched within two short weeks during the month of October, the inaugural Wizarding Weekend festival was created to celebrate a love of Harry Potter and drive a little late fall business to downtown merchants. The handful of participating vendors situated in a funky little alleyway originally hoped for 200 guests. Once word got out and over 8,000 people planned to attend the afternoon festival celebrating all things wizarding, they had to swiftly design a larger experience.

Fast forward one year later, and the same core group of entrepreneurs—a chocolate maker, a local energy provider, an urban developer, an electric bike pioneer—are anticipating another record breaking turnout. This time, they've enlisted an area design team to help add elements of interaction and theatrical staging to the event. Wizarding Weekend is planned for four days of experiences. From Character Brunches and Potion Classes to Quidditch Games on electric cargo bikes—the stage (i.e. Ithaca's downtown) must be set to match this expanded itinerary.

The all-volunteer, community based event reached out to St. John Design Group (SDG) to lead the charge of creating several interactive exhibits to be placed throughout the festival's locations. The company's founder, Pete St. John, is an industrial designer who started his career as a theatrical set designer. He loves Harry Potter and regularly sets aside part of his team's client load for community based projects at low or no cost. Festival organizers felt confident this relationship would be a perfect fit.

After accepting the design challenge, SDG went to work determining how to create elements that fit the following protocol: embodies the spirit and magic of the event, is interactive enough to entertain and delight large crowds, can withstand lots of kid activity and can be built on time and on budget. In other words, all volunteer build labor and five compelling exhibits for under $2,000—Go! 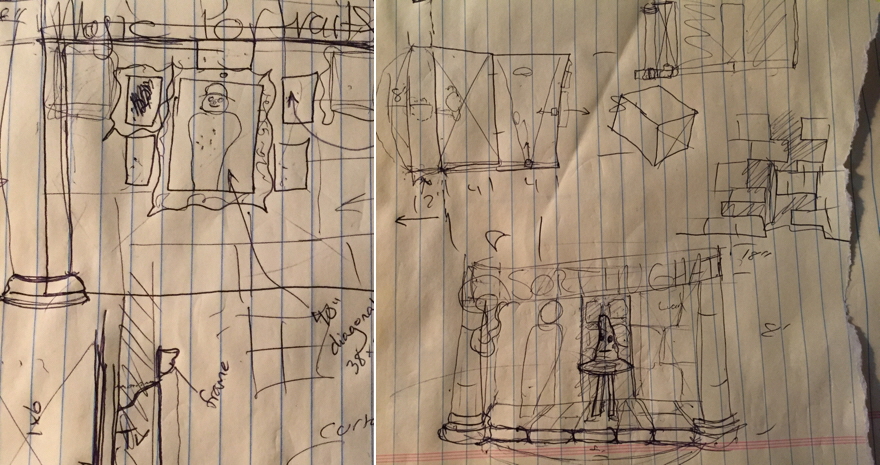 Design: SDG started with simple and quick concept sketches. Drawn on the backs of napkins, yellow legal pads, and discarded pieces of wood with carpenter pencils, they hashed out overall form and interactivity. 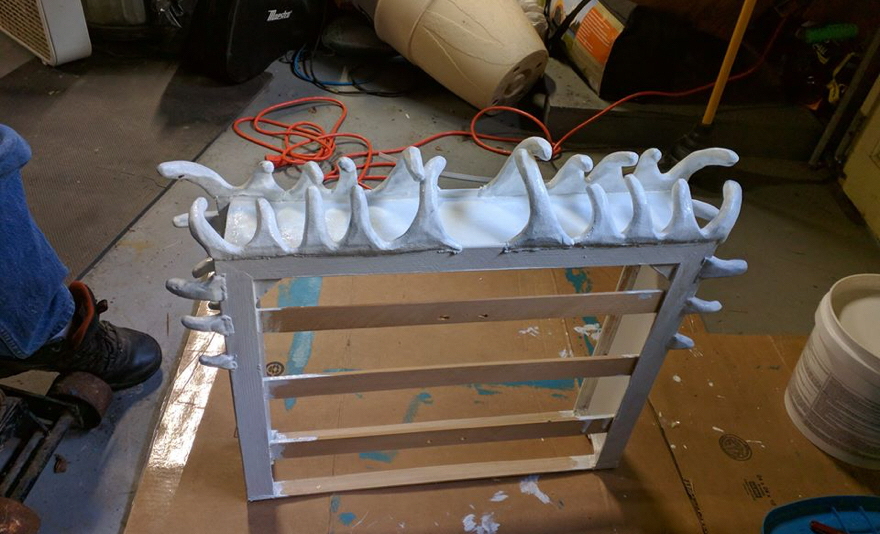 Monster Book. A fan favorite, and a seemingly low build, high impact addition to the festival.

To create the Monster Book, SDG first took the approach of a RC robot base platform for a "Battlebots" style build. While this could have been a great solution, budget constraints quickly led to an alternate solution built on a high rpm remote control car (purchased on Amazon) with a skeleton structure of 2" insulation board, strips of 1" x .25" cedar and water based contact cement (3m's Fastbond 30), which provided enough lightweight strength to build the form of the book. Mold some giant, wonky teeth from Instamorph (low melt plastic), scour Amazon for realistic looking costume fur and eyeballs, and a monster book is born.

To complete the illusion, Sam Corbett, an IT specialist from Cornell University and lead volunteer responsible for building the monster book, will be cloaked in a wizard robe, complete with belled sleeves to discreetly hide the remote control. Together, the keeper and the monster book will roam the streets of this year's festival. 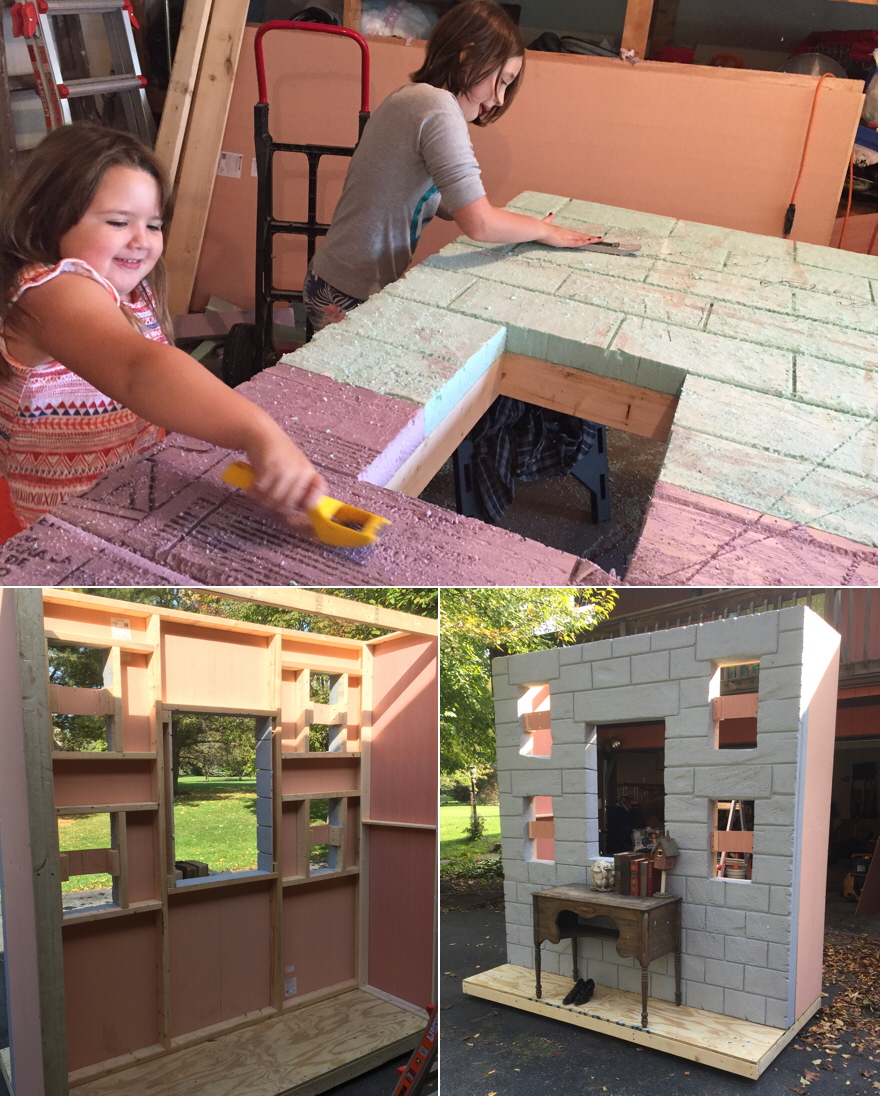 Portrait Wall. The halls of gilded frames, with portrait subjects that engage, enrage and delight passer-bys is an iconic element to the world of Harry Potter.

To design The Portrait Wall, the team built an 8' x 8' wall created from a frame of 2 x 4's, skinned in .25" luan and then covered with 2" insulation foam board. Volunteers textured the foam to look like castle rock then coated it with Jaxsan 600 (an acrylic latex coating) for sealing. Finally, with paint donated from a variety of volunteers, the wall was given a faux rock finishing.

There are five large portraits hung on the wall, four of which will feature streaming video content supplied by Russian Cosplay group, The Founders Four. SDG and the Wizarding Weekend team connected with the group to provide footage based on the iconic movie scenes. The center frame will feature a live actor/actress volunteer who will engage with festival goers as they pass by the wall of portraits, bringing the exhibit to life. 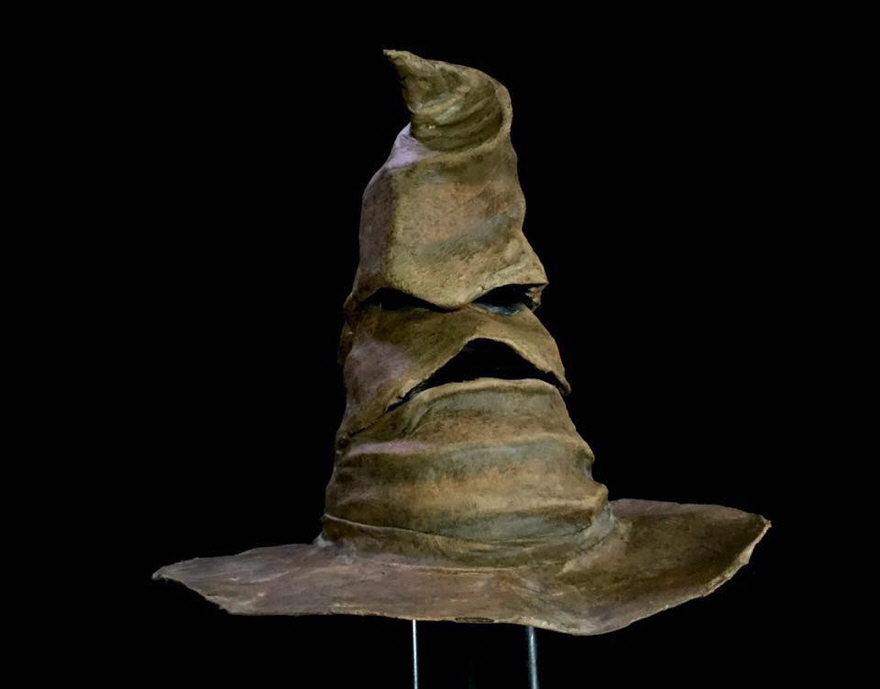 The Sorting Hat, built by friend and volunteer, Ericfx

What house will you be in? Festival organizers thought this was a necessary question to ask attendees, so the dream of an interactive sorting hat was born. A small set was designed and built to house the experience—visitors interested in learning which house the hat will choose for them will stand in front of the set, and the hat will be placed on their head. A local voice actor volunteer will be standing behind the set and will speak to the crowd and animate the hat's "face" using hidden posable features, inclusing a fully operable mouth.

In addition to these interactive elements, the team designed and built a full scale, fire-bearing Goblet of Fire and a replica of Tom Riddle's Grave. A small team of dedicated volunteers, their children and two interns—one from Cornell University and one from Ithaca College—devoted hundreds of hours over the course of just a few months to bring SDG's visions to life. In addition, Bill Overbaugh, a founding member of the festival, proved instrumental in envisioning the Goblet of Fire. Andy Mansfield, owner of Tamarack Design and a past set builder, devoted a portion of his shop and a wealth of knowledge to the build.

Next year, the team is already planning ways to create new façades for the buildings—murmurs of an articulated, animated dragon can be heard on the Wizarding Weekend Build team's Facebook planning page. There's no telling what next year will bring, but one thing's for sure—magic will once again be found in downtown Ithaca later this week. 30,000 locals will welcome Wizarding fans from across the country to their annual festival with open arms.

A Behind the Scenes Look at the Harry Potter Themed Festival, Wizarding Weekend