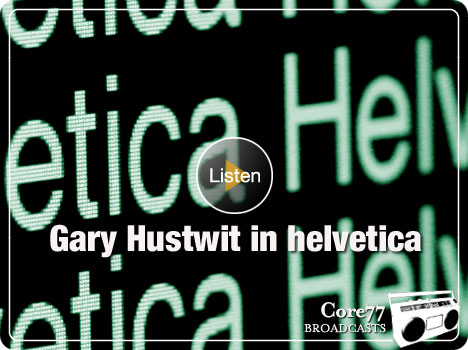 Once simply the name of the most ubiquitous typeface on the planet, now the documentary Helvetica is becoming almost as ubiquitous--at least among members of the design community. The film not only tells the story of the typeface itself, from its birth in Switzerland fifty years ago to current gig as American Apparel mascot, but it also serves as an entertaining primer on modern graphic design, featuring major players from Massimo Vignelli to Experimental Jetset.

Director Gary Hustwit has been accompanying the film to screenings and Q&As at festivals, cultural institutions and AIGA chapters in the U.S. and Europe, almost every single one of which has sold out. Over 50 cities have scheduled screenings, and more dates continue to be added as the buzz builds. Just in the last month, Hustwit's traveled from Istanbul to Ohio and back, appeared on CNN and the public radio show "DnA," and showed the film at the Museum of Modern Art as part of an exhibition on Helvetica. Audiences everywhere are raving--from hard core typophiles to members of the local press marveling at the phenomenon of a "movie about a font." Alissa Walker caught up with Hustwit at the Los Angeles premiere, as a giant Helveticake was being lit with birthday candles.