The powerhouse design duo is weaving with conductive yarn

Jacquard by Google has teamed up with Levi's to create a smart denim jacket, specifically with bike commuters in mind. The collaboration has been going on for quite some time—back in 2015, Ivan Poupyrev, technical program lead at Google's Advanced Technology and Projects (ATAP) division and Paul Dillinger, vice president of global product innovation at Levi Strauss & Co spoke at our conference about the initial stages of the project. Now, two years later, the jacket is a reality and is set to release this fall.

At first, the result of the collaboration just looks like a Fitbit sewn into a jacket sleeve, but the making of video reminds us that Jacquard by Google's mission is to seamlessly integrate tech into textiles. And their mission doesn't stop at concept—below you can see the surprisingly traditional methods used to construct the conductive yarn:

The smart tag on the sleeve serves as a middle-man between the tech infused threads and the user's mobile device. Its easy removal allows the jacket to be washable like regular, non-robotic denim.

"Jacquard yarn structures combine thin, metallic alloys with natural and synthetic yarns like cotton, polyester, or silk, making the yarn strong enough to be woven on any industrial loom."

Yeah, the tech is cool, but I'm most interested in how the indigo dye will fade on the one wrist the wearer will frequently be rubbing. It's slightly unfortunate the other wrist won't get any love. You heard it here first—if you have any form of OCD, consider rubbing both wrists from the start. 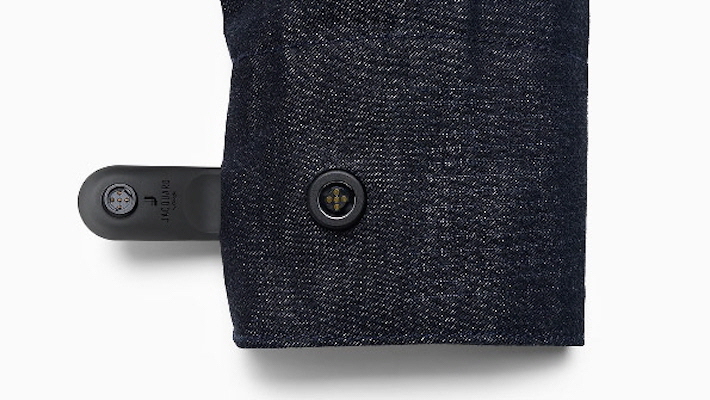 Denim is a textile with rich history, a history that its hardcore fans take very seriously. Does adding technology to the mix take away from this? In a way, yes. However, it's tough to argue that Jacquard by Google and Levi's are completely disrespecting denim culture. At least they're remaining as traditional as possible when it comes to the manufacturing and the jacket's silhouette.