Singularity Watch: Elon Musk Wants To Send Your Brain To The Cloud

IRL Tony Stark wants to BE the artificial intelligence

Did you naively think cyborg technology was relegated to anime and future generations? Think again, and consider investing. The new Neuralink Corp. made waves yesterday after a report in the Wall Street Journal announcing its intention to advance Brain Computer Interface (BCI) systems via cortical implants. Their proposed type of BCI tech can be applied to health systems, addressing conditions like epilepsy and chronic depression, but the long goal is brain-powered computing, as well as computer-powered brains. In short: they want to make brain chips that will help us keep up with AI. For this we can obviously thank (or doubt) Elon Musk, the reigning MVP of cool speculative tech, the jillionaire voted "Most Likely to Become A Benevolent Dictator," and the man running an entire non-profit dedicated to making sure AI don't get too evil.

It might seem slightly counter intuitive that someone deeply (even politically) concerned about an AI apocalypse would be working to advance a cortical interface that would push humans towards computer augmented thinking. But, as it stands, Musk is most engaged with the idea of facilitating the advancement of human cognition. He has said many times that he believes syncretic human-computer combination is necessary for continued species growth, particularly in the face of the looming singularity. He must have really intense dreams.

Musk is on record asserting that, "Over time I think we will probably see a closer merger of biological intelligence and digital intelligence," and is already a public supporter of research on neural lace tech. He's even been making his patented veiled Twitter promises for more info. While often cryptic, and regularly creepy, he rarely fails to follow through.

For now the Eminent SkyKing's new project is extremely low profile—not much more than a logo, an email address, and a trending hashtag. But with his SpaceX/Tesla/Tunnels/OpenAI track record, we're likely to hear a good deal more, sooner than expected. 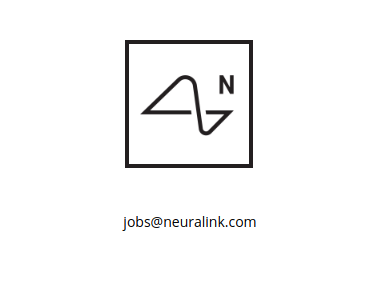 For some fun examples of BCI being used for good (really!) check out the brain-aug teams who competed in last years "Cyborg Olympics" and try to stay hopeful about keeping up with Alexa.

Singularity Watch: Elon Musk Wants To Send Your Brain To The Cloud