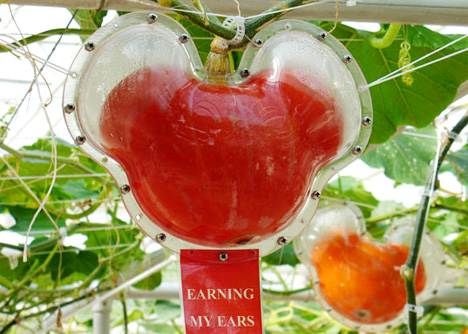 Oprah went green. They're yapping about sustainability on FOX news too. So it's no surprise that hints of greenwashing have surfaced at Disney World, where droves of Micky-lovin' attendees can see how the Mouse helps to "shape" the environment...and produce too.

EPCOT Center is unmistakable--a gigantor geodesic dome a la Bucky Fuller. The acronym expands to read "Experimental Prototype Community of Tomorrow," originally conceived "to be a futuristic model community based on utopian modernist ideas of communal living, no cars and no private ownership."

Our pals over at Inhabitat payed Disney's giant golf ball a visit to check out the last remaining thread of the intended plan, the LAND exhibit which features tours of the 2.5 million square feet of greenhouses that produce food for EPCOT inhabitants and act as experimental grounds for high-tech and high-yield indoor plant growing techniques.

The entire agri-tech research center area has been re-branded under the rubric of "sustainability" and now includes a public exhibition on agricultural technology and global ecology called 'Living With Land' - a rousing exhibit on farming and agricultural innovation which takes the very 1950's-esque position that humanity can solve its food shortages and environmental problems by improving agricultural technology. I'm not really sure that I buy this, but the exhibit was certainly a fascinating romp through the history of "the future".

In the end, you can always leave it to some naive intern to blow up the spot. He explained that most of the produce is genetically modified and that they use styrofoam pots because they're cheap and disposable. On top of that, it's interesting to know that Epcot's major sponsor is Nestle (dun dun dunnn!). And of course, it's laughable that branding mogul Disney would pass up an opportunity to slather on the Mouse sauce--this time in the form of prominently-displayed Mickey-shaped veggies like pumpkins and cucumbers. The Mouse is most certainly in the house.