For many, an ice cube is simply a tool to help keep your drinks cool, but to professional and passionate home mixologists it can be a creative opportunity. This is one of the reasons why four years ago, brothers Chris & Pat Little started prototyping models for the perfect ice mold that not only would create a perfectly spherical ice ball, but also one that was entirely transparent.

What started as a fun science experiment between two brothers quickly turned into a commercially viable business called Wintersmiths, a company dedicated to engineering the perfect ice forms for drink enthusiasts and experts alike. After initially developing a singular ice baller and then a vessel that can freeze up to 4 ice balls at a time,  Wintersmiths recently launched a new Kickstarter campaign for a product high in demand by their fans—The Phantom Ice Maker, a double-wall, vacuum insulated, stainless steel container that can make up to 7 crystal clear ice balls, 6 ice cubes, 8 Collins spheres, or 16 standard cubes.

A product able to make artisanal ice forms like this one appeals to both enthusiasts and, ever more increasingly, to those in the restaurant business, says co-founder Chris Little: "We're starting to see more bars and restaurants buying into this concept because they're getting asked to do it. They're finding they have to buy ice directly from distributors in their area, so some of them actually buy pre-made blocks and things, and they might pay tens of thousands of dollars for that ice. So if they can bring that in-house, that's certainly going to help their margin."

And while many may appreciate the beauty of a clear and spherical ice ball, what some may not realize is they also hold quite functional value in the bartending world. Different ice cubes should be used for different beverage options, as indicated by Wintersmiths. An ice ball's surface area to volume ratio allows it to melt at a slower rate than an ice cube of a similar size, making it the perfect ice form for a high-quality beverage you'd rather not dilute, while smaller cubes and ice shapes should be used for strong drinks you'd prefer to dilute more quickly. The beauty of the Phantom Ice tray is its ability to conform to different cocktail options. 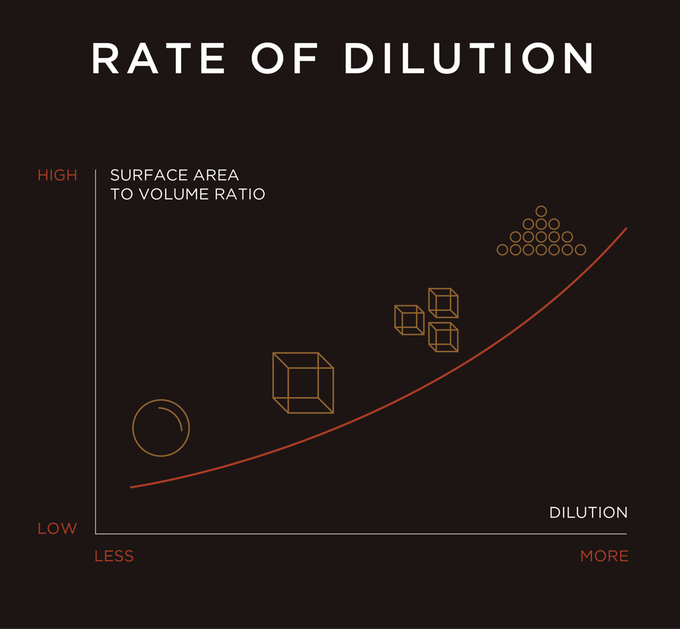 The other interesting aspect of Wintersmiths' ice—its crystal clear quality—is more for stylistic purposes, but equally interesting science. When trying to understanding how the container makes perfectly transparent ice, Little says to imagine what happens when a pond naturally freezes:

"The ground is insulating the water from all sides and the bottom, so the result is clear ice on the top and air-filled ice or unfrozen water below. This is due to a concept widely referred to as "directional freezing" where you can control how the water freezes with insulation. By insulating all sides and leaving the top open, the cold air is coming into contact with the water only from the very top and thus the water freezes layer by layer from the top-down. Our design features exit holes in all of our molds, so the air bubbles never get trapped inside of the ice and leave you with crystal clear shapes. On the contrary, an ordinary ice tray leaves the air bubbles with nowhere to go and they become trapped and frozen in the center of the cube—that is why those ice cubes are opaque or cloudy."

The co-founders of the company, one of which studied aeronautical engineering, developed this patent-pending design technology after a number of experiments and prototypes, which they now say after doing several different product iterations they have a solid hold on. Material selection has always been an ongoing journey as well. "Finding the right material with ice is tricker than anything else. It's not easy to prototype these kinds of things," notes Little, but after plenty of iterations, they finally discovered that a combination of stainless steel, silicone, and plastic ultimately makes for the most quick-freezing, easy release tray possible. 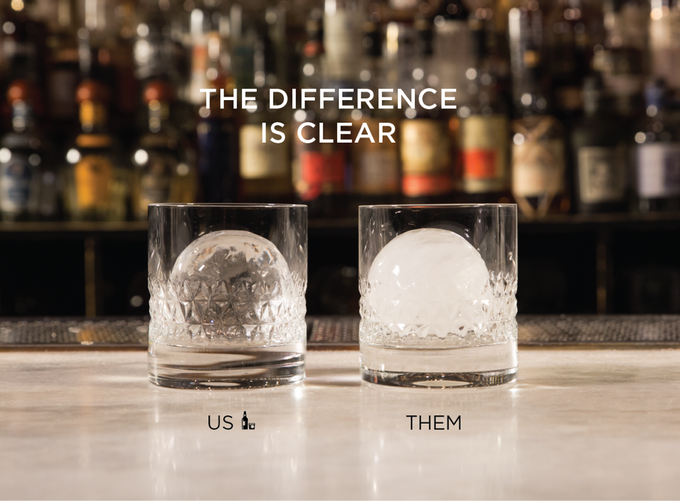 A Wintersmith ice ball vs. the conventional

And while the guys at Wintersmith acknowledge their products are a bit of a cheat when it comes to the art of ice carving, they hope their product preserves the notion and function of a practice like this in the bartending world. "There's always going to be the showmanship part of [the traditional ice shaping process] that makes for a unique experience, and our products do that too in some ways," says Little, "I think everybody's just really surprised when they see a large format piece of ice that's completely clear."