London-based fashion brand COS has returned to Milan Design Week for a seventh consecutive collaborative installation, following a very successful year with Studio Swine. This time around, COS's collaborator is Palm Springs-based designer Phillip K. Smith III  who has created an otherworldly, reflective environment located within the 16th century Palazzo Isimbardi—the first time COS has selected an outdoor venue. 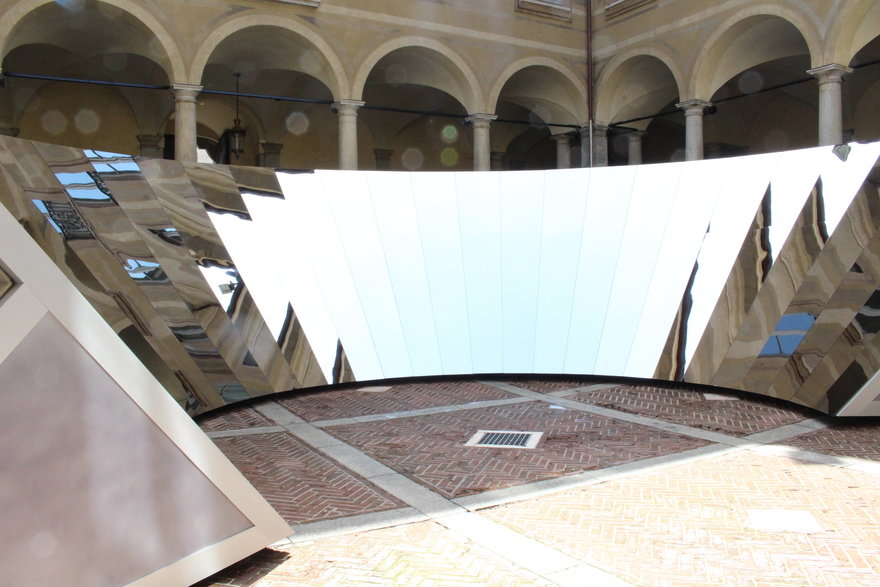 Immediately entering the Palazzo, visitors are faced with the largest structure in the installation. Almost like a kaleidoscope effect, the mirrors are ever-changing, projecting a different image of architecture and sky every time. 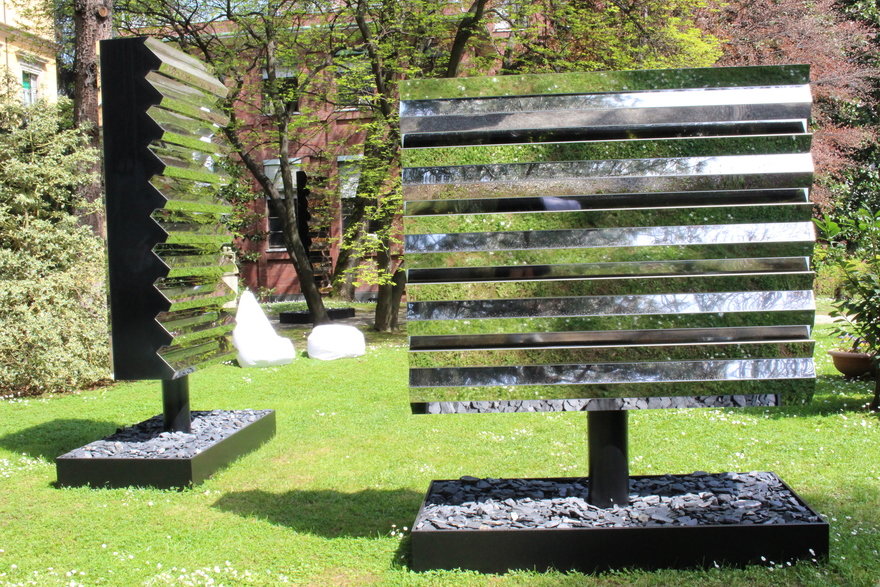 The large work is accompanied by smaller reflective works in the Palazzo's garden, just a few steps away from the main structure. Out of the hundreds of installations being designed specifically for Instagram selfies these days, it was especially refreshing to come across a mirrored installation designed to help you appreciate more than just your face.

On that note, we sat down with Phillip K. Smith III and COS Creative Director Karin Gustafsson to discuss what went on behind the scenes of Open Sky and to learn more about the materials and fabrication process:

Can you tell me more about how this project came to be?

Karin Gustafsson: We started off by reaching out to Phillip because we really like his work and have been interested in it for some time. We knew by then that we wanted to come back to Salone and do something here again. We've been here since 2012, so this is the seventh time, and we've never been outdoor before this. We invited Phillip over, and we had a first meeting where we shared a bit more about ourselves as a brand, shared our DNA, and our values. Then Phillip shared his work and his vision, and that was really the starting point.

From there did you immediately come up with concepts?

Phillip K Smith III: I just waved my wand! (laughs) No, but the process was great because COS was hands-off in a way. They basically said, "Here is who we are as a company, here is the site, and we look forward to seeing what you'd like to do." Essentially what you see in that courtyard is what I presented at that first meeting. It was very fluid and very free from the beginning. It was more like working with a museum than it was working with a brand. 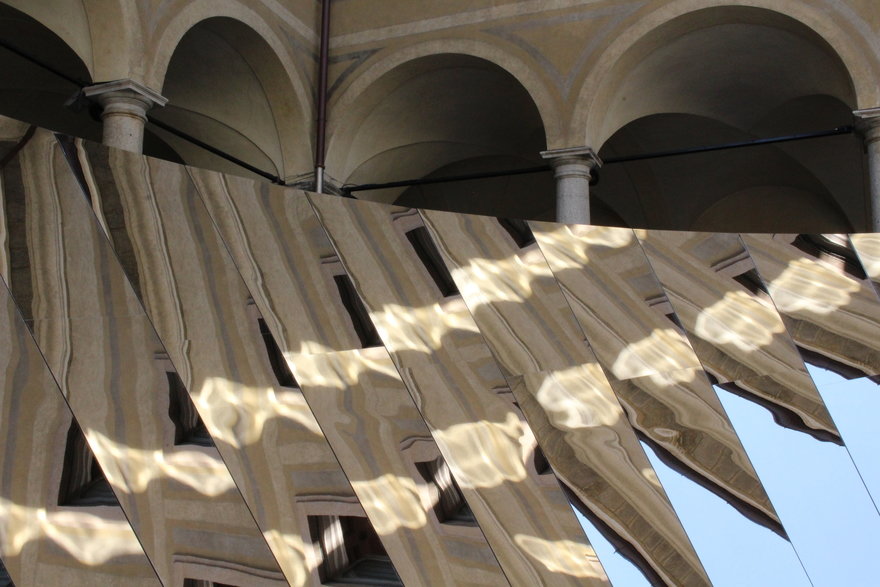 How long did the entire process take?

PKS: Our first meeting was in September of last year. After that meeting there was a process immediately following where we decided which concepts we liked and began to think about how we could actually build them. That was when the real collaborative spirit started happening. It's COS and Phillip K. Smith III on the banner outside of the building, but there are probably over 100 people who have touched this project, and it couldn't have happened without them.

That ranges from people in my studio helping with taking this idea from sketch to a three-dimensional digital model, to working with fabricators both here in Milan and in Brooklyn. I worked directly with a company called UAP, Urban Art Projects, to work out a lot of the detailing and to ensure that the simplicity and purity of that concept would be maintained through all of the fabrication. There was a real high level of precision that I was after, so I needed to consider that when I was acquiring a fabricator. These were thoughts between both myself and COS—that there's a respect for precision. It was so nice to be able to work with a client that appreciates precision and understands the kind of simplicity of thought and how complex it can be to project that simple thought.  So, working with the COS team, with UAP, with my studio, with the venue, with the production company here in Milan—it was a lot of different people all pushing towards this goal of getting this thing accomplished and built.

It's always fascinated me how the most simple forms are actually the most difficult to achieve.

PKS: Yes, exactly because the more you distill something—the more you're looking at it—the more you're perceiving it. If I hold up my hand and show it to you in motion, it's really difficult to get a full picture, right? But if I show you my completely still hand, now you're about to notice the wrinkles and all of the subtleties. When there's only a surface presented to you, you really look. And that's the goal of a lot of my work. I've done a whole series of light and shadow pieces that are all white, that are all about presenting light in its simplicity, and there might be three planes of white, and that's it. But there's a real scanning of the surface and then a recognition of how simple and pure and how beautiful it can be. There's a similar thought for, certainly, this courtyard piece as well as the reflectors out in the garden of recognizing the simple, pure beauty of the Renaissance architecture and the Milan sky. 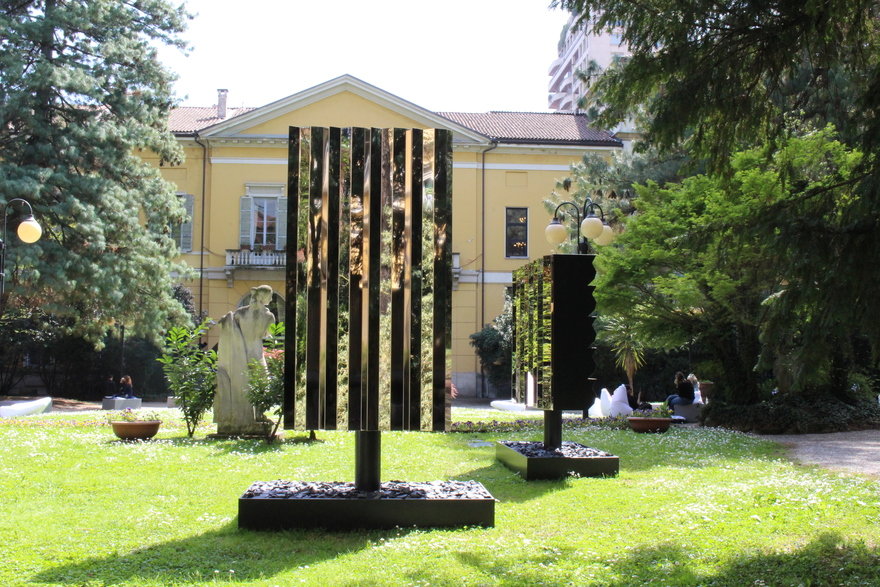 We often work quite big, large and creative from the beginning, but then we reduce. The more you reduce, the more attention to detail you have to have. But that also creates more long-lasting experiences and more long-lasting value in product. Very often, I imagine in your studio, Karin, the struggles of, "How does this go next to that?" or "How do we make that line beautiful and pure?" There are so many detailing questions that come up.

KG: They can be obstacles, but the obstacles make you think and challenge you, and they make you move on. So, it's all for the good—it keeps us on our toes.

Karin, I think what Phillip was just describing is very much parallel with COS's clothing. Many of your silhouettes appear simple on the rack, but then when you try them on, you notice all of these small details that you would have never noticed. Phillip, when you first look at Open Sky, it's this one large piece, and then you really step up close, it becomes so much more.

PKS: It changes wildly, if you step to the left a couple feet or right to the couple feet. Everything changes.

What was your inspiration that lead you to this final point?

The initial inspiration was that square of sky that the palazzo frames itself. I wanted to pull the sky down to the ground. I lived in Rome my fourth year of architecture school, and I understood that courtyard space and the feel of that space because I used to walk through it every day to go to my studio. When I knew I'd be working within a similar kind of space here in Milan, I remembered that square of sky. It's so beautiful and distinct. It's almost like there were blinders of architecture that framed this perfect view. James Turrell's sky spaces are all about that, but here's a sixteenth-century Renaissance architecture doing that 400 years before Turrell, in a way.

Did you play around with any other materials before you settled on the mirrors?

Reflection is possible through a variety of materials, but my goal was figuring out how I could present the sky and the architecture as purely as possible. Structurally, what has to occur? How does it actually get fabricated? How does it get packed? How does it get assembled? What's the longevity of it? How easily does it scratch or not scratch? All of these very mundane questions were so essential to the project. 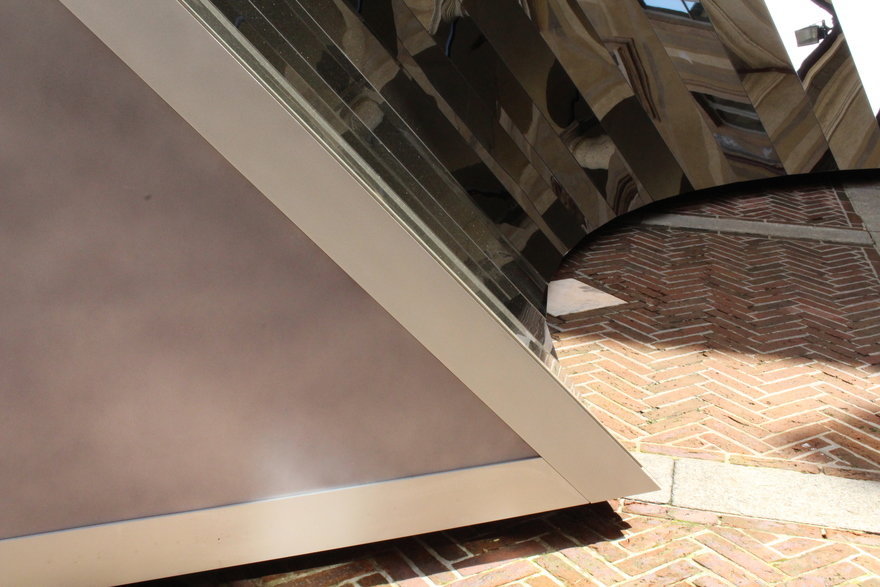 Ultimately, the material I selected is a mirror-polished stainless steel. It's a 14 gauge, so it's a little bit thicker than one-sixteenth of an inch. The material couldn't be much thicker because then you can't actually apply it. You'd have to slightly bend it in order to align everything, and if it's an eighth of an inch thick, it's too thick to be able to do that. There are a lot of those mundane things that have to be contained within this circle of fabrication logic, and assembly logic, shipment logic, a person lifting it logic, and then all of it with the litmus test of, is it true to the concept? Are we following and allowing the concept to stay as pure as possible? 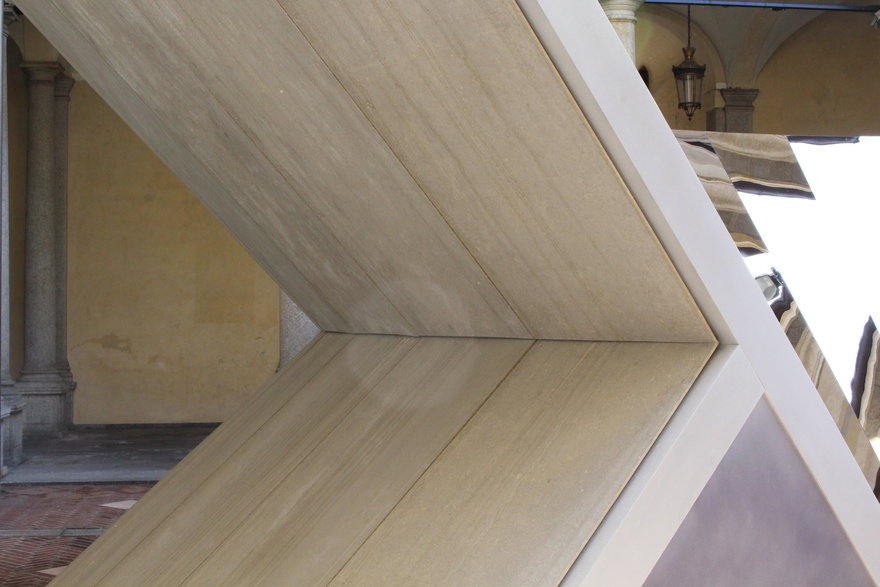 There's a whole structural logic on the inside of the piece that you don't see. You only see two of the 34 ribs where the piece is actually cut on the edges. You see the kind of triangular logic—the structural logic. There's a repetitive modular element that runs throughout the structure, and if you figure out how to make one of those modules, you can, in theory, create the entire piece.

I'm sure there's a lot of beauty within that hidden structural system.

There's a lot of beauty in it. I love talking about that. I resist sharing some of those images because I like maintaining the mystery of the work, but I'll say, a lot of the photos of the piece before any of the concrete panels or the mirror went on were gorgeous. It was like looking at a skeletal structure of a human being; it's gorgeous.