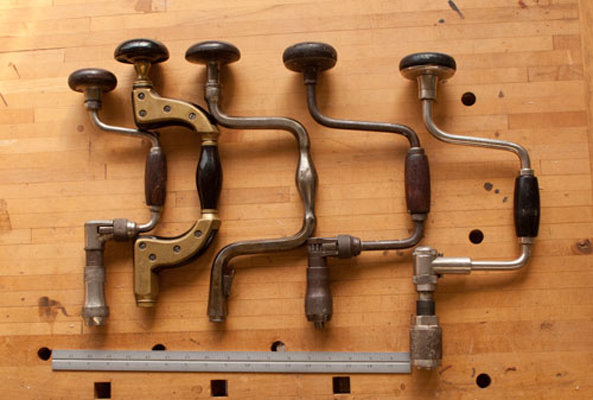 In Part 1 of Brace Tips, I explained how to make your brace work for big holes. Now we look at the other extreme. Unfortunately the solution for small bits isn't as easy to do. For holes from 1/4" through 2" in diameter a brace was the hand tool of choice (although Jennings augur bits were made as small as 1/8"). For smaller sizes under a 1/4", egg-beater-style hand drills were usually used. With small brace bits - say 1/4" - 1/2" you don't really need a lot of power but running the handle round and round in the 10" diameter circle of a typical brace is slow. Our ancestors wanted to speed things up, especially since drilling 1/4 - 1/2" holes in furniture is a very common operation.

The solution was a "Quick" brace, which is simply a smaller sweep version of a regular brace, ratchet and all. The Stanley brace shown above at left has only a 3" throw for a total of a 6" sweep, and with it you can drill a lot faster.

Interestingly enough, while an English Ultimatum brace is underpowered for drilling large holes, it has a pretty fast stroke for drilling average sized holes found in traditional joinery. If you recall in part one I mentioned that the American braces drove the English off the market - by 1900 houses had plumbing, and early electrical wiring, all which needed pretty big holes drilled, and not too many drawbore joints where you just needed a small 1/4" hole. I wonder if there is a connection?

In the picture above the braces are ordered by sweep. Starting from the left is a 6" Stanley quick brace. Then comes an English Ultimatum brace with a 7" sweep, and a very lovely Scotch brace with a 9" sweep. Finally, the standard 10" American braces, which were mostly bought for house building not furniture.

If you come across a 6" quick brace, grab it!