In the late eighteenth century, when American colonists established detainment centers for criminals, they borrowed what they knew from Europe. Jails were disorderly, unsanitary, and lenient regarding regimen. People with means could purchase their way out of the discomforts of incarceration, buying or bartering for – among other comforts – clothing. 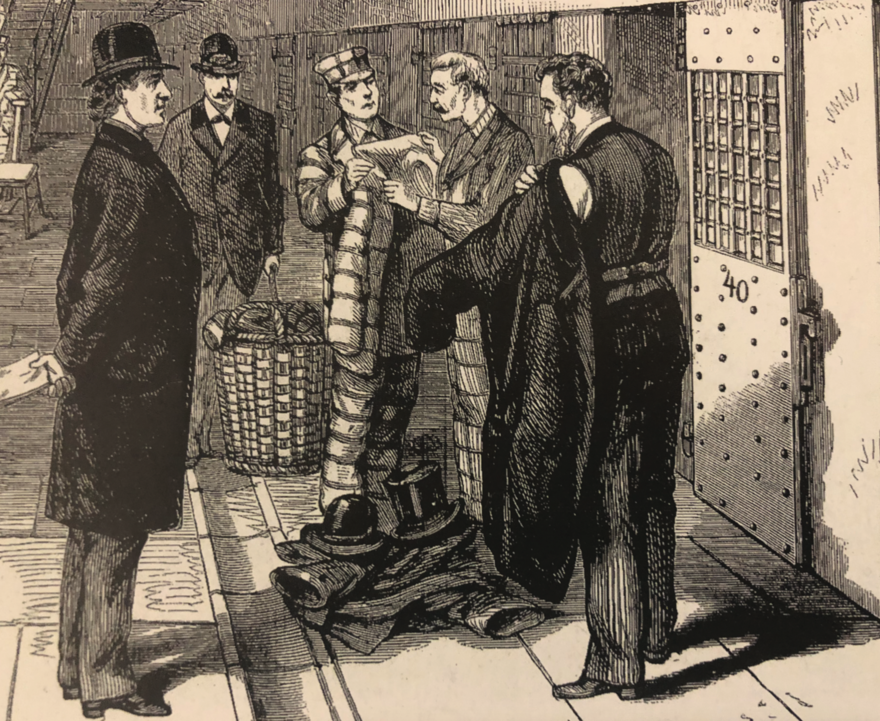 An illustration from 1860, depicting incoming prisoners' transitions from their street clothes to the striped uniform.

An act put into place in 1790, which was part of a so-thought progressive new system of penology proposed by a Philadelphia-based consortium of prison reformers, instituted a consistent manner of dress for incarcerated individuals. Introducing clothing manufacturing as a new system of labor within the prisons and jails themselves, the actual clothing that was being produced and worn now mimicked the general, modest style of the times: plain gowns for women, two-piece outfits of linen in the summertime for men, and of wool in the winter, with access to jackets and coats (source). 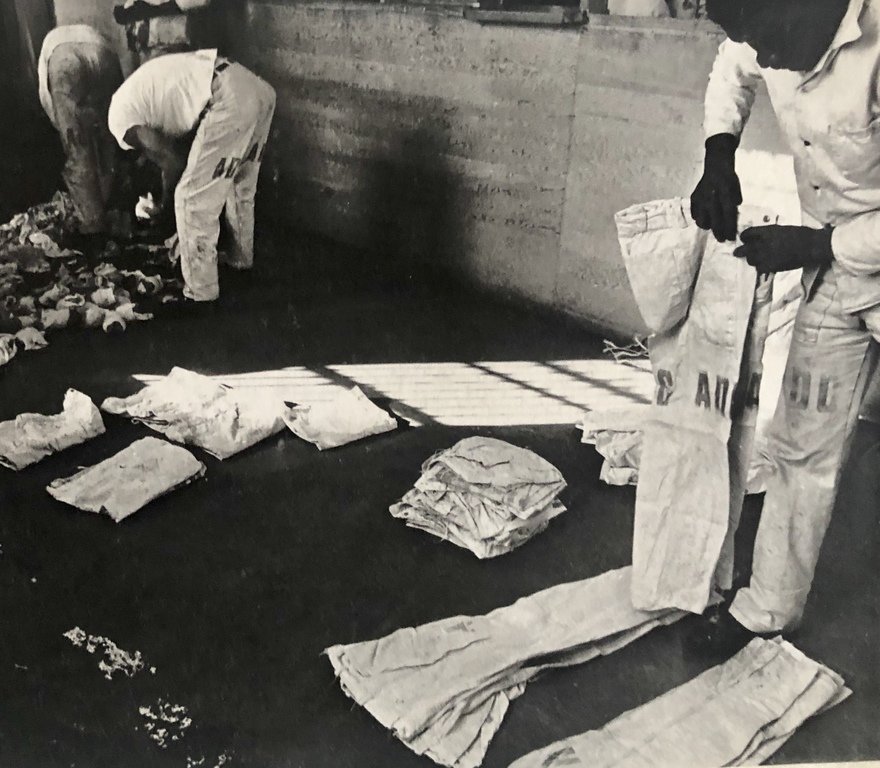 Incarcerated men in an Arkansas penitentiary working in the laundry facility. From Few Comforts or Surprises by Eugene Richards (1973).

Instituted in Philadelphia, the benevolence of this act didn't quite translate to other prisons in the U.S. at the time. In New York, for example, the introduction of a more consistent prison outfit shifted from a focus on normality, to a focus on explicit differentiation. In the later 1790s and through the early 1800s, uniforms were introduced to loudly call out the convicted nature of the incarcerated: they were colorful or other otherwise categorically differentiating, and were deliberately humiliating. 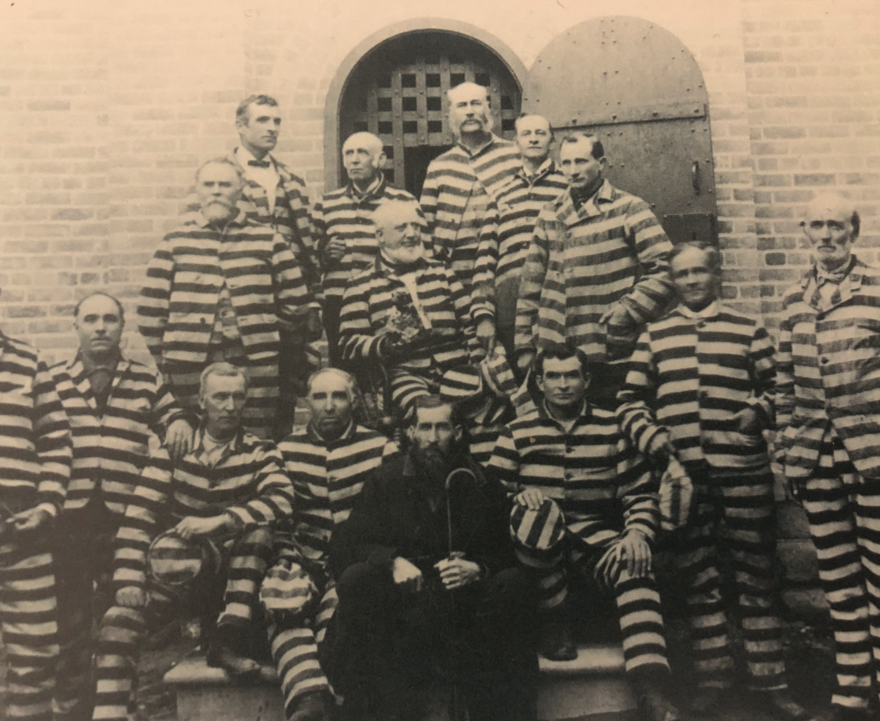 A group of incarcerated men photographed in 1895 in Utah. From Hoaxes, Humbugs and Spectacles by Mark Sloan (1990)

This uniform trajectory evolved into, by 1815, the black and white striped suits that are calcified into the history of incarceration in the U.S. by their widespread referencing (and, at times, their parodying) in visual media. In other words, we know these uniforms. We can picture them. We can picture, hypothetically, who's in them, what they're doing, and maybe even what they "did." Conspicuous enough to discourage escape attempts, the boldly, starkly striated uniform clearly and humiliatingly distinguished incarcerated persons – and, as clothing historian Juliet Ash identifies, took advantage of an inexpensive pattern that "symbolically represented prison bars", in essence rendering incarcerated citizens doubly caged. 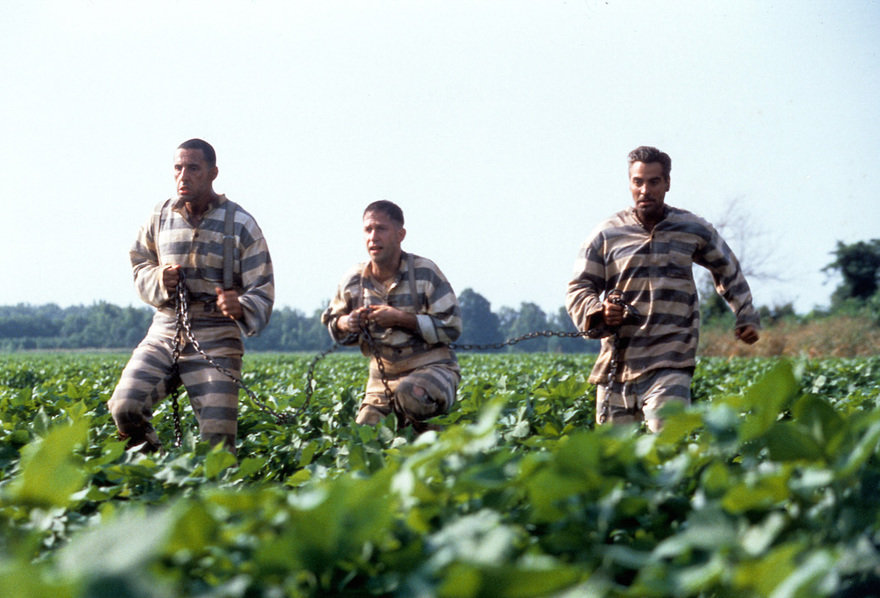 A still from directors Joel and Ethan Coen's fiction film O Brother, Where Art Thou? (2000) 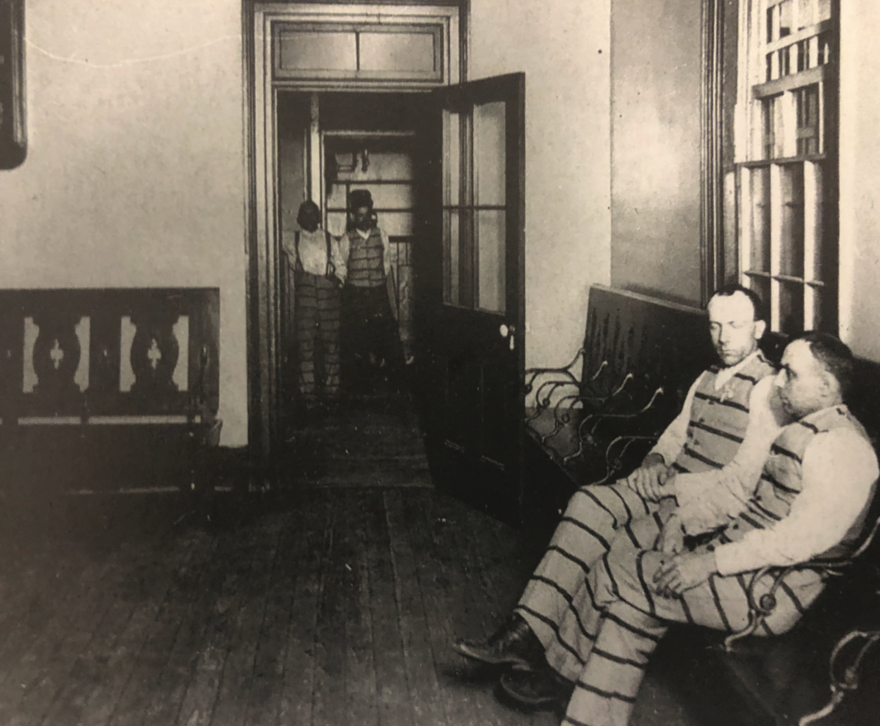 A pair of incarcerated citizens waiting for their respective visitors at New York State's Sing Sing Prison, photographed in 1904.

Although the black and white stripes were abandoned in most facilities across the U.S. throughout the early to mid-1900s, with federal acknowledgement of their dishonorable associability with nominally outdated chain gang labor, the evolution of the uniform's design has since clung to the ideal of dishonoring its wearer.

In early February 2019, when temperatures in New York City were falling below freezing daily, the Metropolitan Detention Center in Brooklyn was reported as suffering from a power outage, leaving its detainees without heat. Rachel Bass, a Brooklyn paralegal who was communicating with some of the jail's incarcerated citizens at the time, shared with the New York Times that, among other harmful disallowances, they didn't even "have access to the commissary to buy an extra sweatshirt."

Rewind more than twenty years to the mid-1990s, when former Arizona county sheriff Joe Arpaio notoriously instituted pink underwear for incarcerated citizens of Tent City jail in Maricopa County (which is now closed). A long time coming, in 2012 a federal court ruled that "'the dress-out in pink appears to be punishment without legal justification,'" noting that "it's fair to infer that the selection of pink as the underwear color was meant to symbolize the loss of prisoners' masculinity." 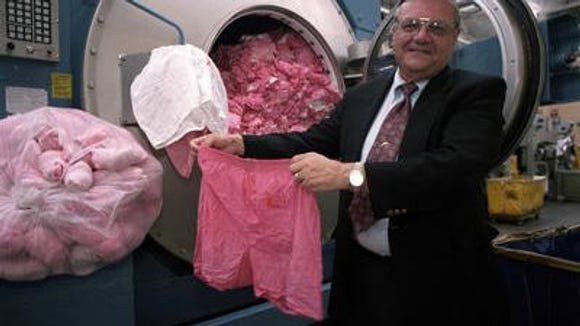 Former sheriff Joe Arpaio with a pair of the pink underwear he notoriously introduced to the men's uniform at Tent City Jail, in Arizona. (source)

Although it's likely problematic to entwine legality with the maintenance of masculinity, not to mention to tether masculinity to a particular color, the importance of the ruling was the legislative positioning on the side of the detainees, in support of their psychological and physical comfort. The press attention and public outcry in response to the Metropolitan Detention Center's lack of heat functions in the same way, positioning parties in alliance with incarcerated communities and their comfort (or discomfort) through the uniform's clothing. 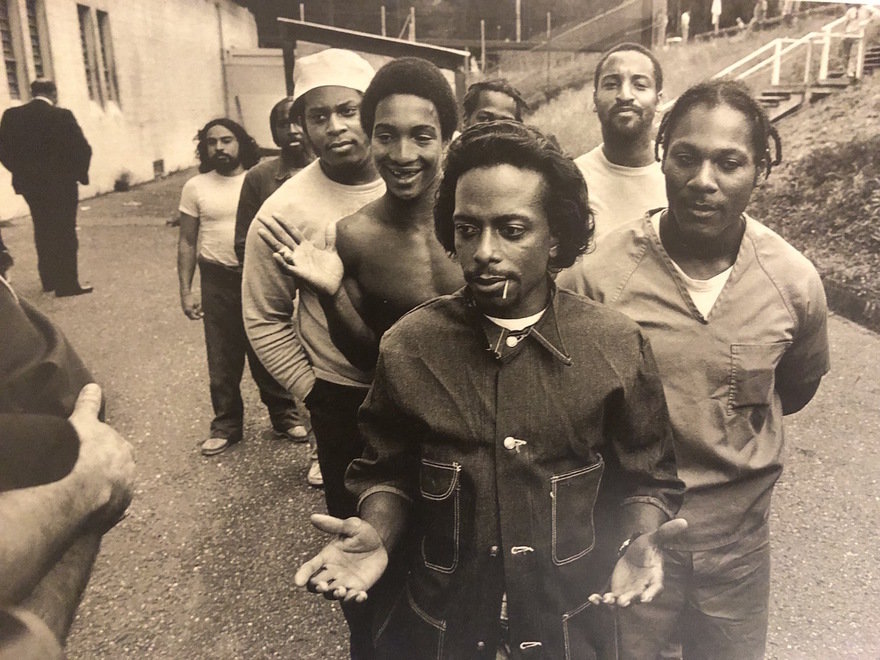 A mix-match of styles and garments worn by this group of men, photographed in 1983 at San Bruno Jail in California, exemplifies the drastic variety, between penal facilities, of access to uniform materials. This jail offers more lenience, allowing denim, cotton, and other more traditional materials and pieces of clothing to be introduced to the State-given uniform. From Black in America, Eli Reed (1997).

Even from this brief snapshot we can recognize that what's offered to incarcerated populations in terms of officially sanctioned clothing differs from facility to facility; but there's in fact an overarching regulatory statement all facilities of incarceration are technically required to adhere to. It's The United Nations Standard Minimum Rules for the Treatment of Prisoners, drafted in 1957 and which, since its revision in 2015, is known simply as the Nelson Mandela Rules. Its rule number 19, under the heading of "Clothing and Bedding," states:

(1) Every prisoner who is not allowed to wear his own clothing shall be provided with an outfit of clothing suitable for the climate and adequate to keep him in good health. Such clothing shall in no manner be degrading or humiliating. 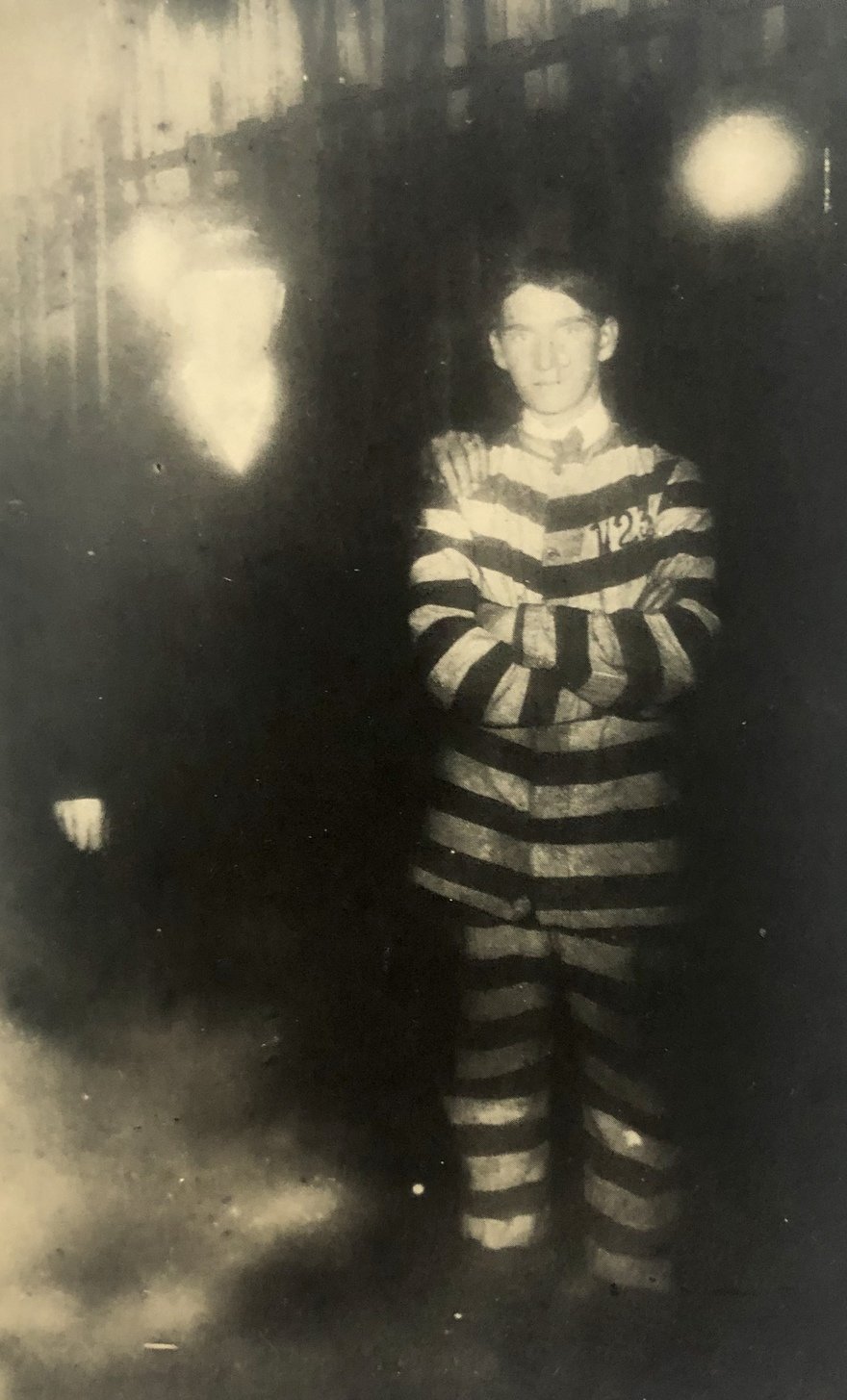 An anonymous photograph of a man in his striped prison uniform, captured in the early 1900s. From Prairie Fires and Paper Moons, published by David R. Godine (1981).

Institutions, in fact, often echo this regulation in their incoming detainee handbooks, stating that it is an "inmate right and responsibility" to have "proper bedding and clothing." Expectedly, however, many if not most facilities inarguably fall short on delivering this cited human right.

Perhaps this is an economic decision: it's cheaper to buy cheaply, to buy without the take-a-step-back criticality that allows empathy to slip into our systems and product design processes.

Perhaps this is an ideological decision: like back in the day, the collective, institutional "we" still thinks that prisoners deserve to be othered and humiliated (clearly, voting rights, facilities themselves, etcetera signs point to Yes, but entertain the rhetoric with me for a moment!).

Perhaps this is a decision of pure negligence; an indeliberate decision, so to speak, that's the result of trickle-down bureaucratic myopia.

Whatever the reason for the general, modern bureaucratic position that the contemporary prison uniform need not be all-encompassing comfortable – nor even safe, necessarily – we, as citizens and as designers or design thinkers, have the responsibility of consciousness. 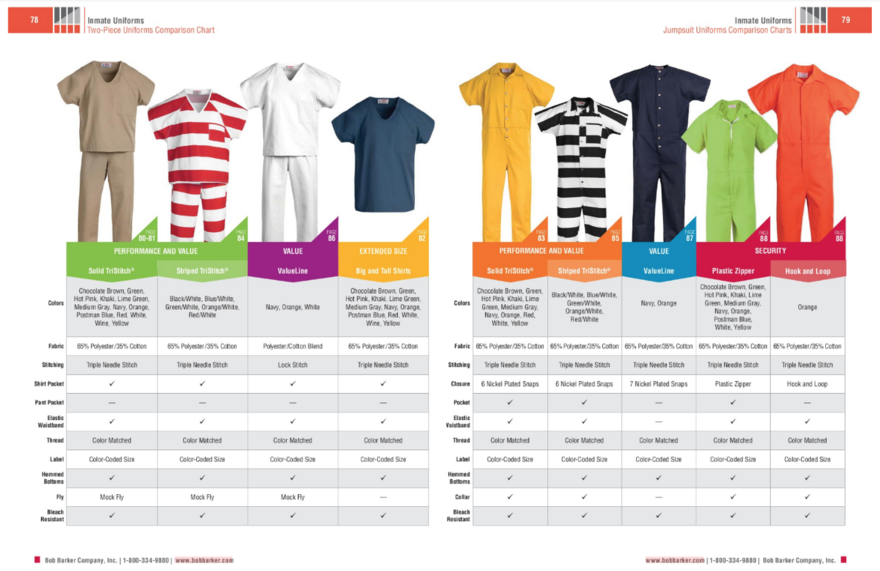 A spread from the Bob Barker, Incorporated 2019 catalog – an ordering service and the nation's largest supplier of detention materials, ranging from security and disciplinary equipment to food and games to uniforms. The catalogs supply to correctional facility bureaucrats and superintendents directly, versus the incarcerated individuals themselves. 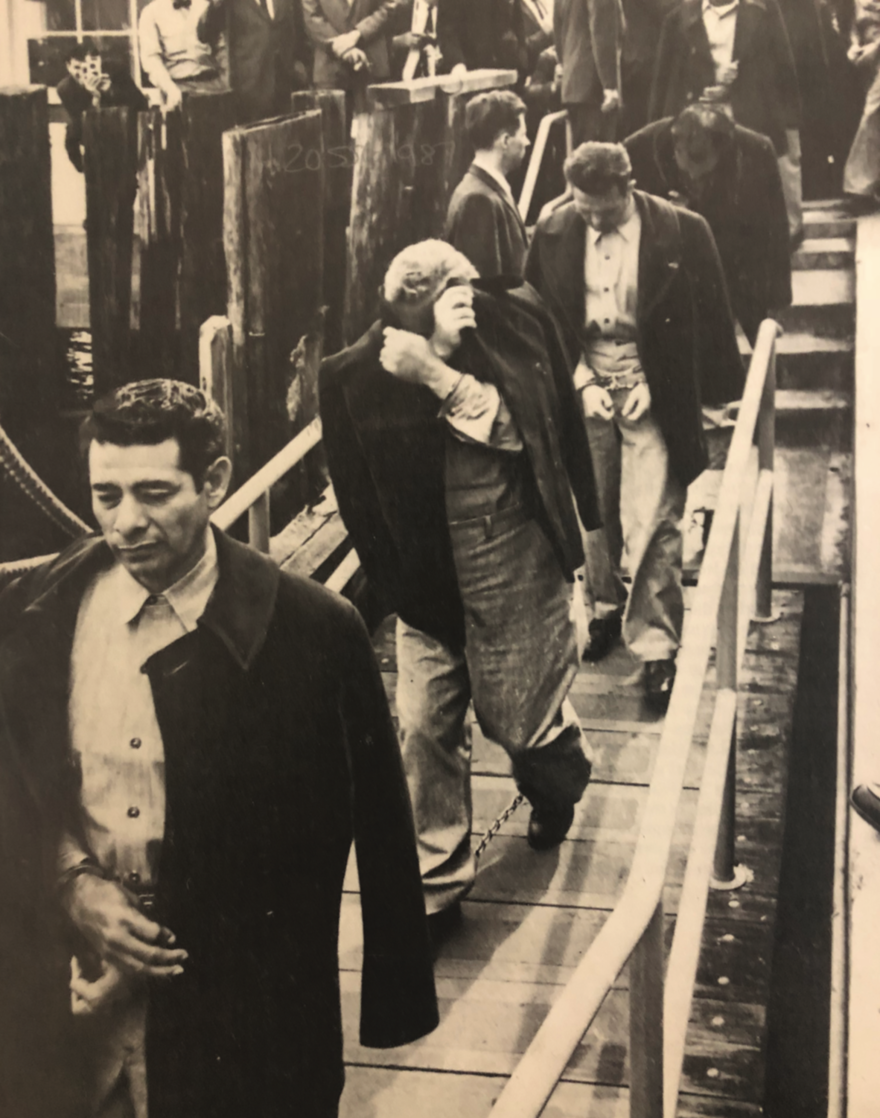 Photographed here in 1963, the final group of inmates was chaperoned off Alcatraz Island as its infamous prison shut down. They are pictured here in plain, two-piece outfits, a style denoting the move away from the striped uniform. From Inside the Walls of Alcatraz, Frank Heaney (1927).

Approaches to reforming the penal system, including its uniform, began before the ink on the nation's Declaration of Independence dried. They continue today, more than 200 years later, out of equally as urgent necessity. And so today we have the responsibility of the awareness that this piece of material culture – the design object of the prison uniform – is present and affecting; that it's one of the many products of design that's within the neglectful prison-industrial maelstrom; that it unignorably belongs to the day-to-day experience of being incarcerated, and that it has the power to be navigated from arenas of negligence, to arenas of progress. Progress, in this sense, means the right to corporeal comfort and safety, to retention of identity, and – perhaps paradoxically the most basic and the most difficult to institute – acknowledgement of humanity for those currently or once incarcerated.

Emily R. Pellerin recently graduated with her MA in Design Research, Writing and Criticism from SVA. Her thesis, Style on the Inside: Understanding power dynamics in the carceral environment through its clothing, focused on the prison uniform and its relation to identity and power.