I recently learned something pretty disturbing, told to me in confidence, and I'm trying to figure out how to describe it to you without getting anyone in trouble. So please forgive my vague language.

I know someone within or connected to a major corporation, a household brand name, that produces a popular product that contains a lot of an environmentally-unfriendly material. It is popularly believed that this material can be readily recycled. But when the company looked into the actual rates, they discovered far more of it is being disposed of in a damaging way and even worse, that they are producing more and more of it each year. In other words, they are making the problem far worse.

That part of it is not surprising. What I found distressing is that the company has concluded that the problem is intractable, and that no alternative material is viable; so, to avoid consumer backlash, they've chosen to purposefully distract us with publicity campaigns touting some positive (but statistically-insignificant) recycling initiative they've achieved. This achievement was selected for publicity because it contains some specific positive imagery that polls well with consumers. The campaign is not in itself a lie, but it's like saying "Look at these two delicious berries!" on a plate of food that you're eating that consists primarily of poison.

And I get it. The number one reason corporations exist is to generate profits, not save the planet. That recent mass pledge of CEOs on corporate responsibility aside, all corporate leadership is compelled to pursue profit above all else, and if they don't, they'll be deposed and replaced by someone who will. No corporation will social-responsibility their way out of existence.

People will never stop buying the product I'm so obliquely discussing here, and the company will never stop making it. The only viable course I can see is that we'll have to material-science our way out of the problem. This will be, in broad strokes, a two-step process. Step One, developing the stuff. Step Two, doing careful research to see if, long-term, the new stuff actually is better for the environment than the stuff it's replacing (more on that at the end).

On the Step One front: This year's London Design Fair kicks off on September 19th, and they've already announced their Material of the Year, which isn't a singular material at all, but all biomaterials in general. To highlight the category, at this year's exhibition the LDF "will show four brilliant examples of work by designers with a keen awareness of the environment. Using a range of by-products, these designers have created functional and aesthetically pleasing designs [that] will be presented at the Fair's Second Yield exhibition."

Here we'll give you an advance look.

Totomoxtle is a new veneer material made with the husks of heirloom Mexican corn. An important part of traditional Mexican gastronomy, the country's native corns range in colour, from wonderfully deep purples to soft yellow creams. Sadly, owing to globalisation, the number of native varieties of Mexican corn are under threat. The only real hope of saving the heirloom species lies with Mexico's indigenous people, who plant the corn in accordance with tradition. Working in partnership with the community of Tonahuixtla in the Mexican state of Puebla, Totomoxtle is helping to regenerate traditional agricultural practices and establish a new craft that generates income for impoverished farmers. 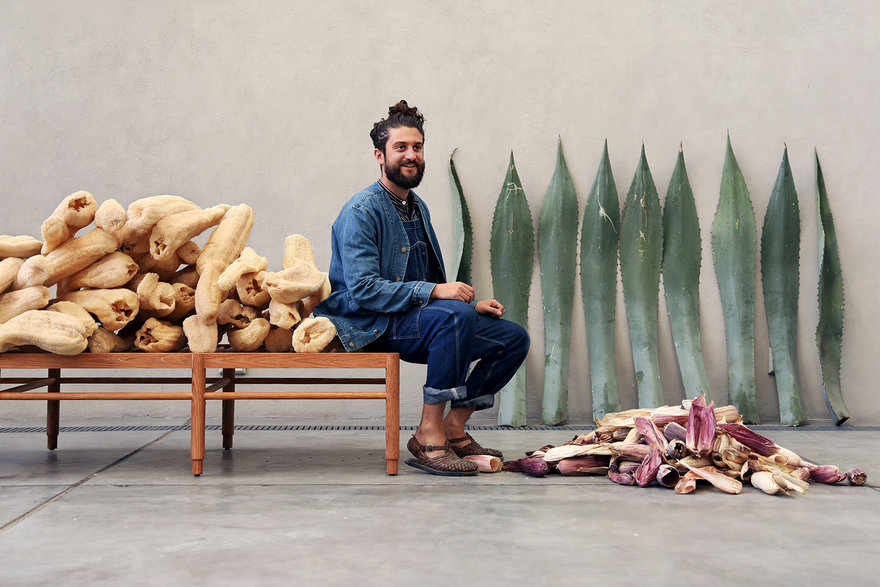 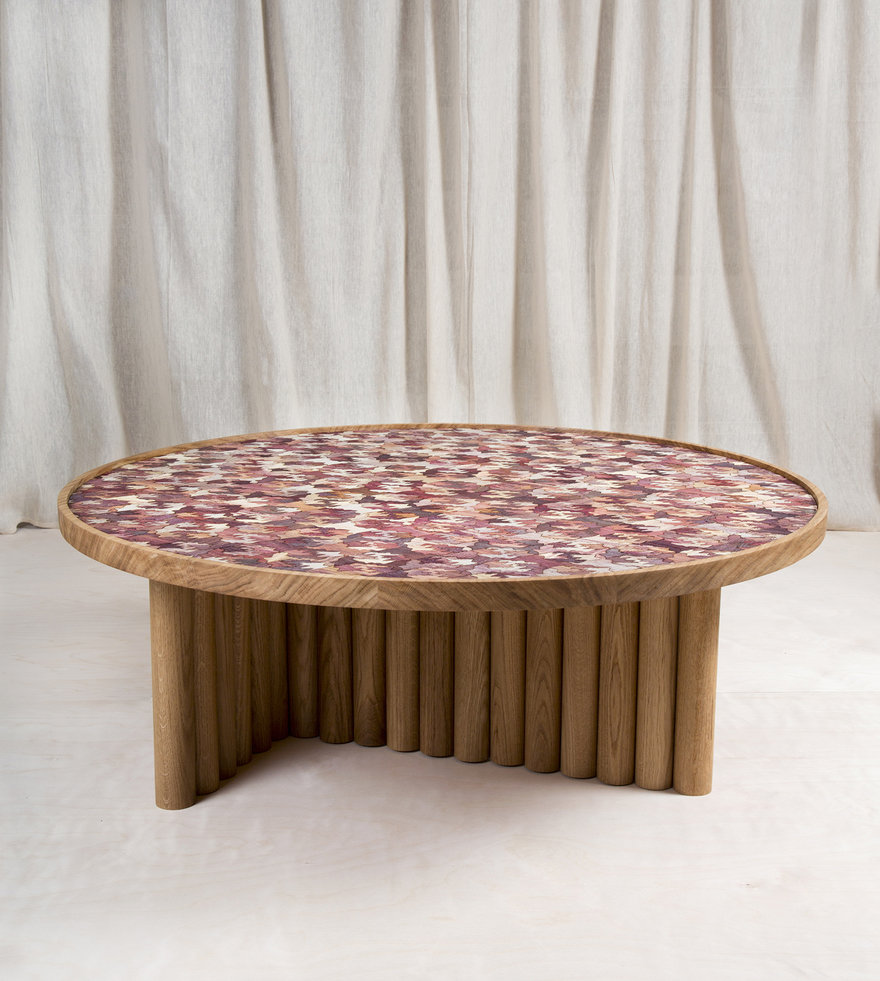 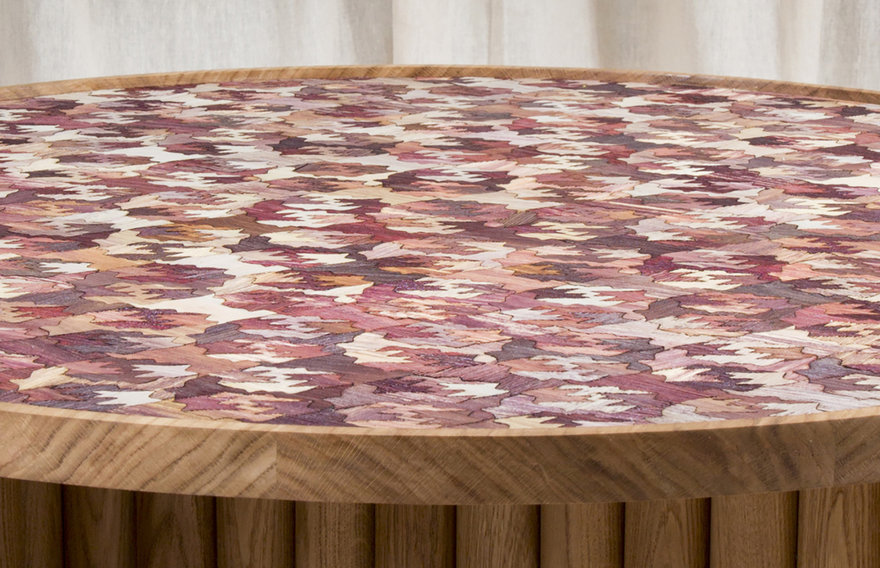 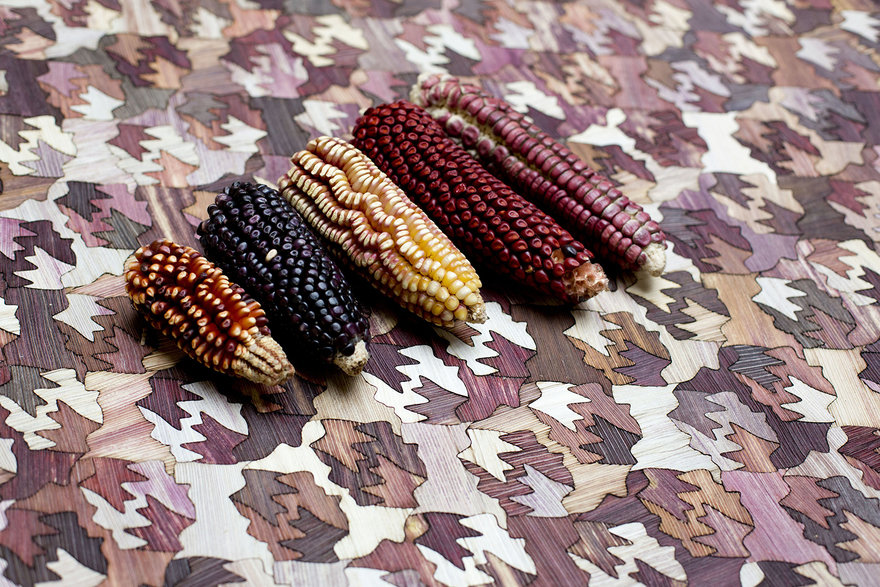 Since 2016, Fernando Laposse has been collaborating with a group of families in Tonahuixtla. A Mexican product and material designer, Fernando works between Mexico and London. His approach is to take a natural material that is often considered waste (such as corn husks), and with extensive research, transform it into a refined piece of design. As a designer, Fernando is concerned with sustainability, biodiversity, disenfranchised communities and the politics of food. His work is informed by a material's location, and encompasses both cultural and historical narratives. 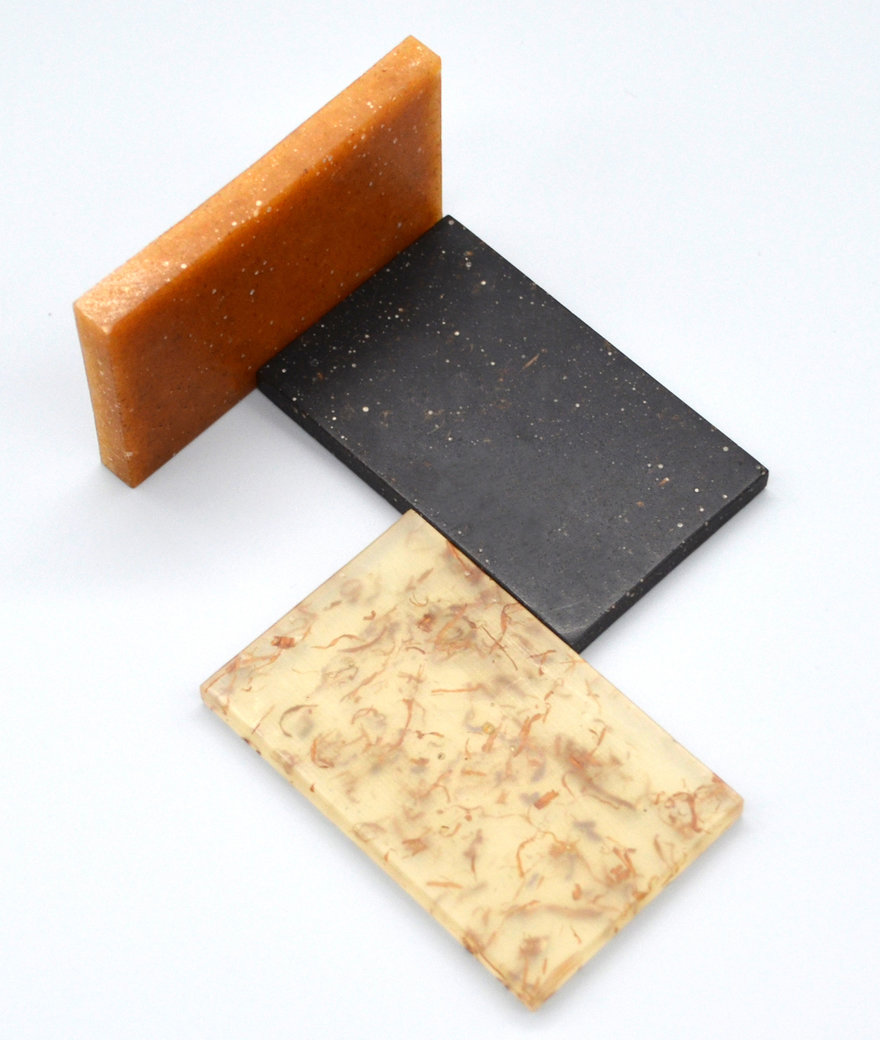 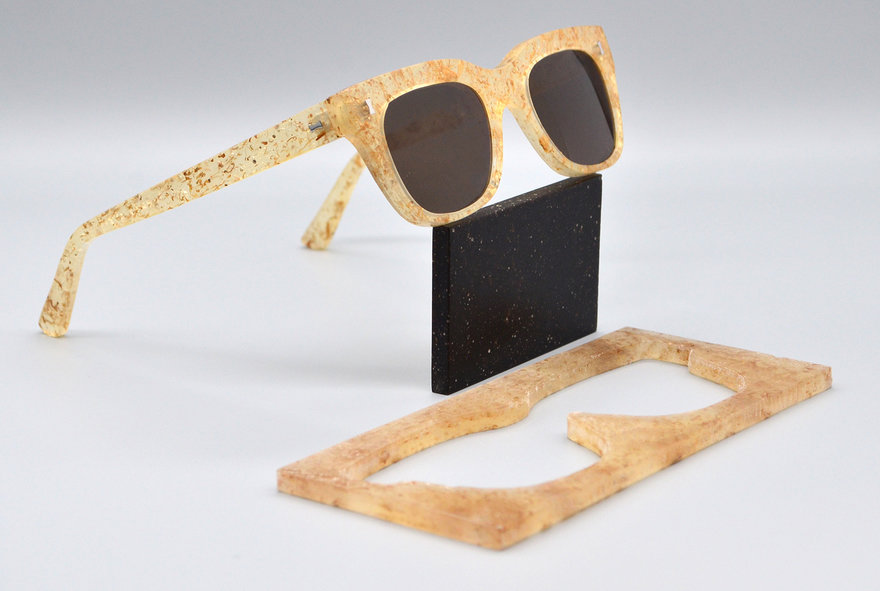 As the world's largest manufacturer of frozen potato products, McCain—a family-owned company with a number of sustainability projects—supplies Chip[s] Board with its raw materials. Chip[s] Board has produced several innovative and sustainable circular economy materials using potato waste, including Parblex™ Plastics: these translucent pure or fibre reinforced bioplastics can be used in fashion and interior design. With material waste deemed a global concern, Chip[s] Board has been successful in both national and international grants and competitions, as well as attracting attention from global brands. The company's next course of action is to scale up its production, moving a step closer to replacing toxic polluting plastics with responsible alternatives.

Based in the Netherlands, Studio Tjeerd Veenhoven is a product design studio with a difference: Tjeerd Veenhoven designs value chains, from initial production to the overall consumer experience. 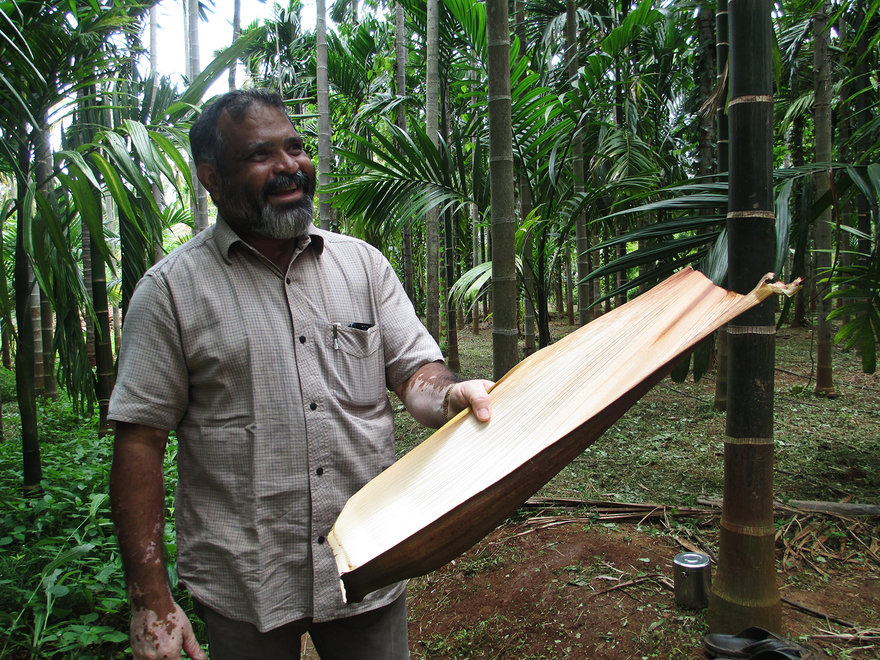 The areca betel nut is a staple ingredient of Indian cuisine. The nut grows on the areca palm tree, found throughout southern India and other regions. Like most trees, these palms shed their large leaves every year, beginning in October. The areca palm tree produces an abundance of beautiful, unused palm leaves—around 80 million square meters yearly. Considering this natural waste, Tjeerd Veenhoven created a way of putting the leaves to use. Employing simple, natural ingredients and processes, Tjeerd was able to permanently soften the dry, hard and brittle palm leaf, giving it a leather-like quality. Known as PalmLeather, this project was established in 2010 and has been growing ever since. 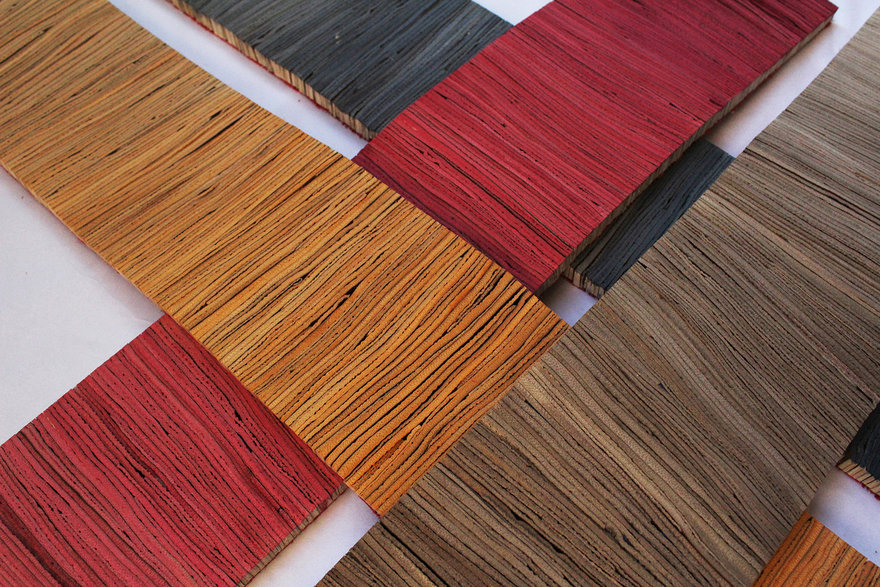 During the past eight years, Tjeerd has set up several small producer-owned factories in India, the Dominican Republic and Sri Lanka, to manufacture PalmLeather and products made with the material. Both Tjeerd and others have designed various products that are locally produced and sold by craftspeople, under fair working conditions. One such product is the PalmLeather interior rug. Made with softened palm leaves that are cut into strips and placed vertically, the rugs have beautifully creative patterns. Owing to their natural state, each rug is unique. These rugs are produced on commission in the Dominican Republic, in various sizes and patterns.

Founded in 2015 by Johannes Kiniger and Giulia Farencena Casaro, High Society is a sustainable design company, located in the heart of the Dolomite Mountains in northern Italy. By employing a compression moulding technique, the brand creates plant-based lighting from post-industrial waste. This waste includes: hemp leftovers, pomace, the pulpy residue that remains after wine production, and the discarded leaves and stalks from tobacco cultivation. Each light sold by High Society supports initiatives against drug dependency, in collaboration with Forum Prävention in Bolzano, a city in north-east Italy. 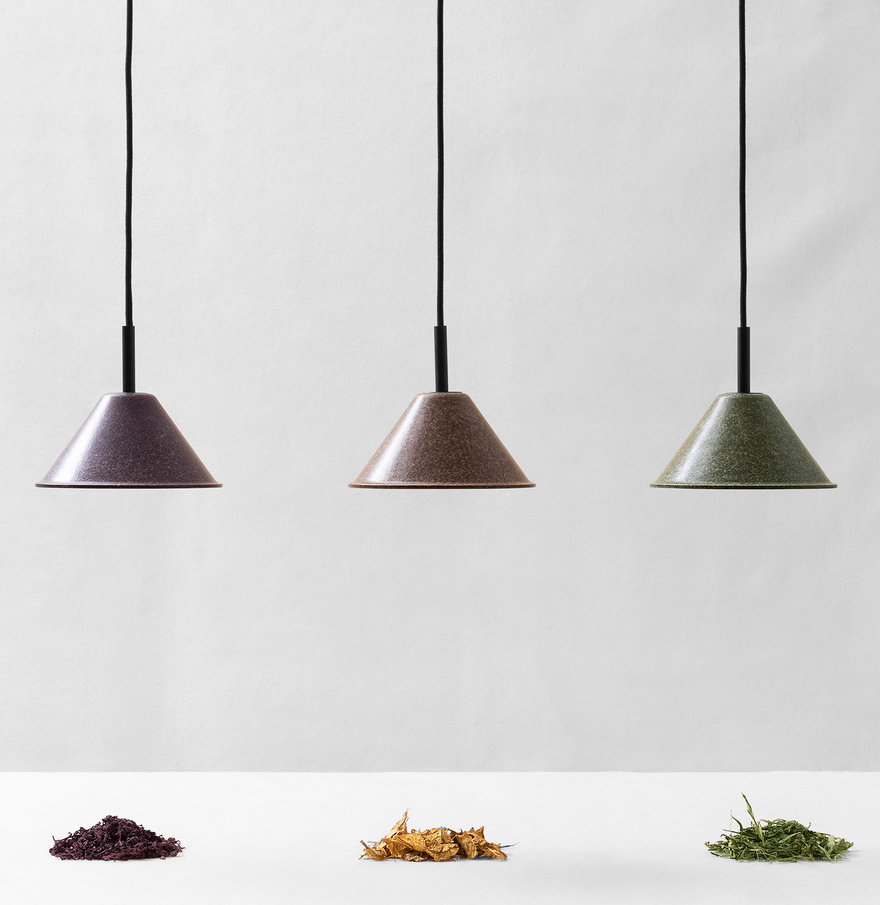 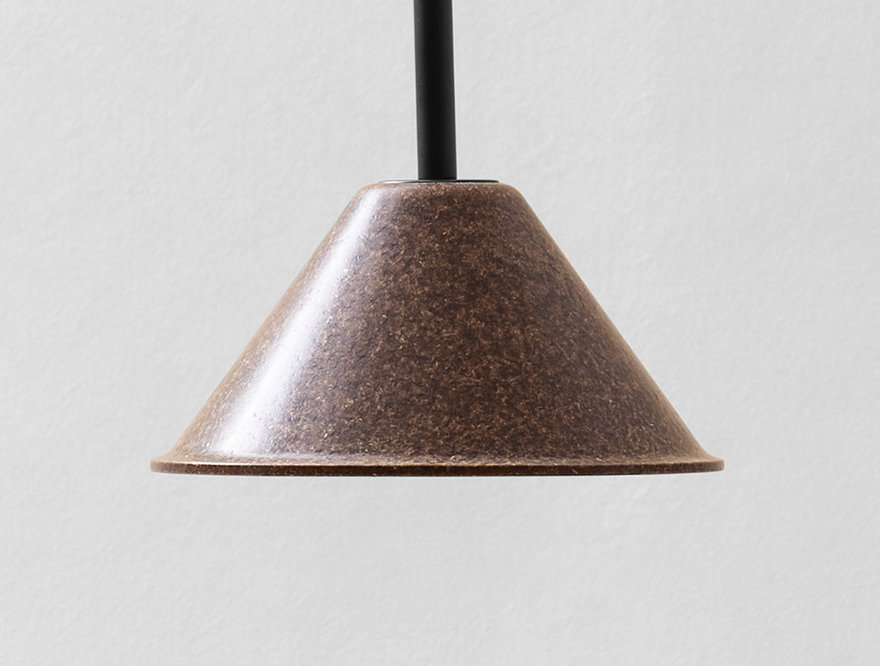 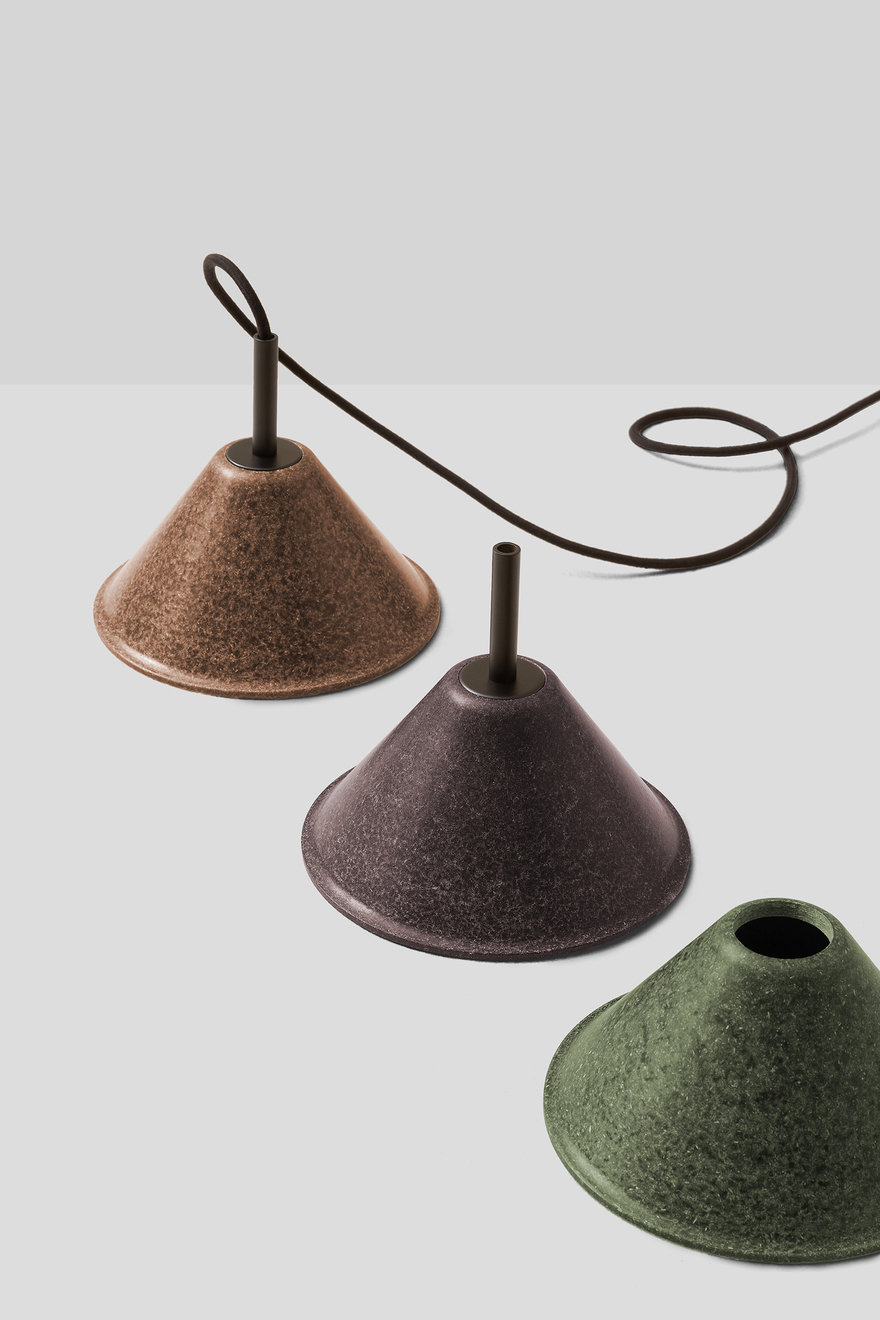 High Society produces three lamp variations: Highlight Hemp, Highlight Wine and Highlight Tobacco. To make the Highlight Hemp pendant, High Society uses industrial hemp leftovers, cultivated without pesticides. For the Highlight Wine pendant, pomace is collected from a local organic winery in South Tyrol. And to make the Highlight Tobacco pendant, leaves and stalks discarded during tobacco cultivation are collected from a supplier in the Venetian region of Italy. Each unique lamp variation is made using compression moulding with an added bio-based binder, followed by the application of a natural wax coating—this provides a shiny surface and protects the lamp from humidity. Minimal and elegant, the pendants are ideal for both commercial and residential use.

As I wrote earlier, once the difficult Step One of developing a biomaterial is realized, the perhaps-even-more difficult Step Two of investigating its long-term effects should be pursued. By now you've probably read about those "eco-friendly, compostable" fiber bowls containing harmful chemicals, and as writer John P. Kazior pointed out, "with almost all bioplastics, if they end up in the ocean they will typically breakdown into microplastics and at that point are actually no better than fossil-fuel produced plastic." You can learn more about that here.