Also, there's apparently some confusion over whether NASA's new spacesuits are one-size-fits-all or not

As we learned here, when female soldiers in the U.S. military are given body armor designed for men, their job is made more dangerous; the ill-fitting armor has been shown to encumber women's range of movement, which affected everything from their aim with a firearm to their ability to quickly get in and out of a vehicle. Even worse, the bad fit creates gaps that an enemy can grab onto during hand-to-hand combat. 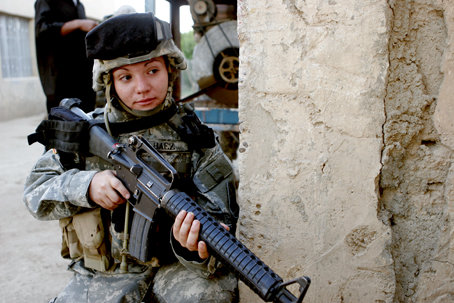 Sheathing the relatively barrel-like shape of the average male torso is a relatively straightforward design process; but military designers have been stumped by the problem of creating curved armor plates to fit the average female form, as the shapes required create more weight and even worse, weak points. (Hopefully this will change, as last year the House of Representatives finally greenlit funding for the design of female-specific body armor.) 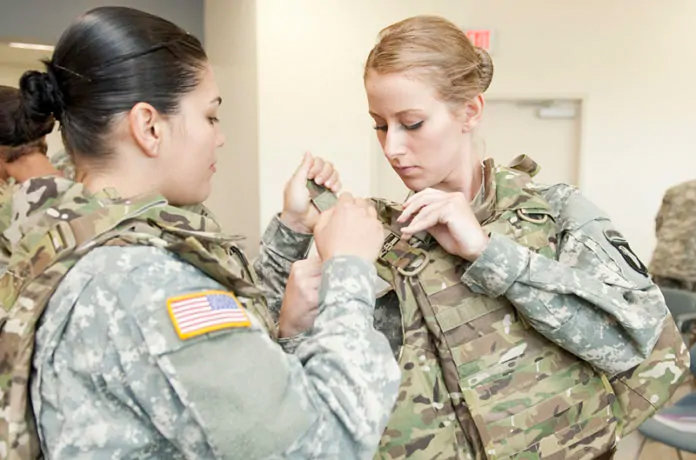 So I was surprised to learn that another dangerous government-backed job that increasingly involves both genders, the vocation of astronaut, has unisex outfits that work for both men and women. Apparently a spacesuit's large interior volume (required for pressurization) moots the need to accommodate the anatomical bits that distinguish the genders. Instead, the problem with astronaut suits has been size.

As an example, earlier this year two astronauts at the International Space Station were scheduled to work on an exterior repair, a spacewalk in NASA parlance. This requires special spacesuits--Extravehicular Mobility Units, or EMUs for short--different than the ones worn inside the station (called Orion suits). The modular EMU spacesuits are not designed for gender, but instead for size, with just three options for the torso portions: Medium, Large and Extra Large.

Both astronauts selected for the task were female and one of them, Christina Koch, was outfitted for a size Medium suit. The other astronaut, Anne McClain, had trained in both a Medium and a Large down on Earth, but on an actual spacewalk earlier in the mission, had discovered that the Medium was the better fit. 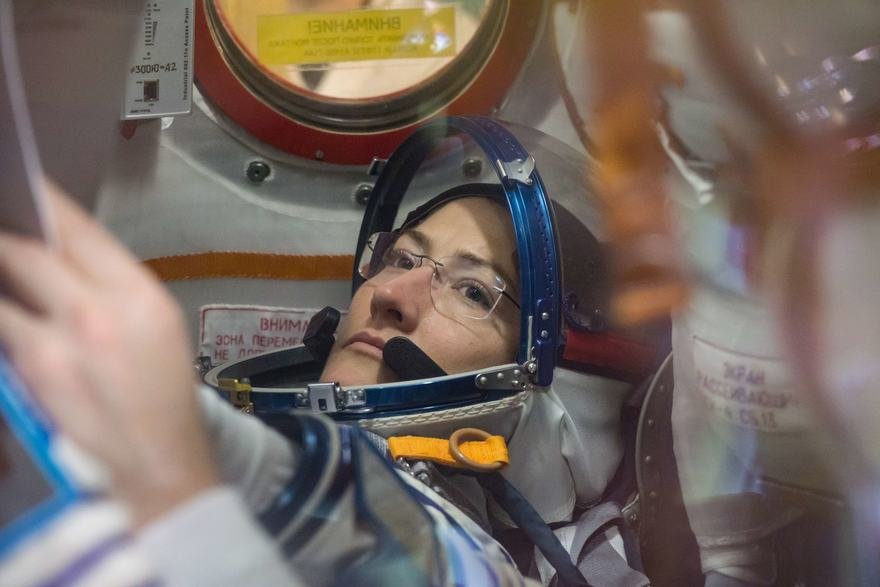 The problem was that, while they had two Medium suits onboard the station, only one of them had been prepped for the mission. Preparing a suit for a spacewalk is more complicated than getting dressed for an Edwardian dinner party, with a time-consuming list of equipment safety checks and "loop scrubs" that must be performed first. In order for the spacewalk's task to be completed on schedule, McClain stepped aside and fellow astronaut Nick Hague went in her place, in the prepped size Large. 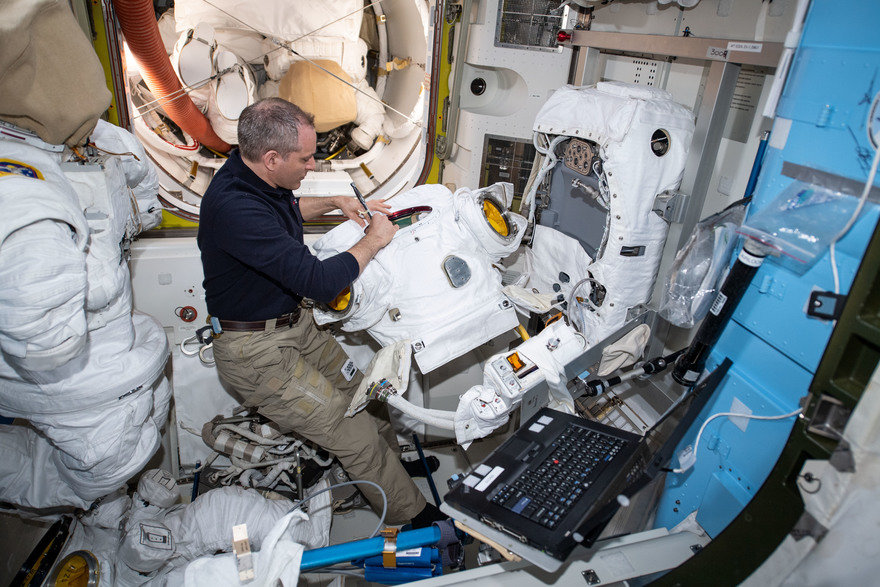 Preparing an EMU for a spacewalk

As a result, what would have been the first all-female spacewalk--a coincidence of scheduling, with astronaut rotations being "luck of the draw," according to NASA spokesperson Stephanie Schierholz--did not happen. "When you have the option of just switching the people, the mission becomes more important than a cool milestone," Schierholz told The New York Times.

Still, for years NASA engineers have understood the problems associated with having suits of different sizes. On a spacecraft or station with limited space, and in a potentially dangerous environment where redundancy can mean safety, it would be desirable to have complete interchangeability of gear among all astronauts. And this week, NASA revealed the solution they've been working on.

On Tuesday NASA unveiled the prototype for their next-generation EMU, called the xEMU (Exploration Extravehicular Mobility Unit), as well as a prototype for the orange Orion suit that astronauts wear when inside the spacecraft or station. 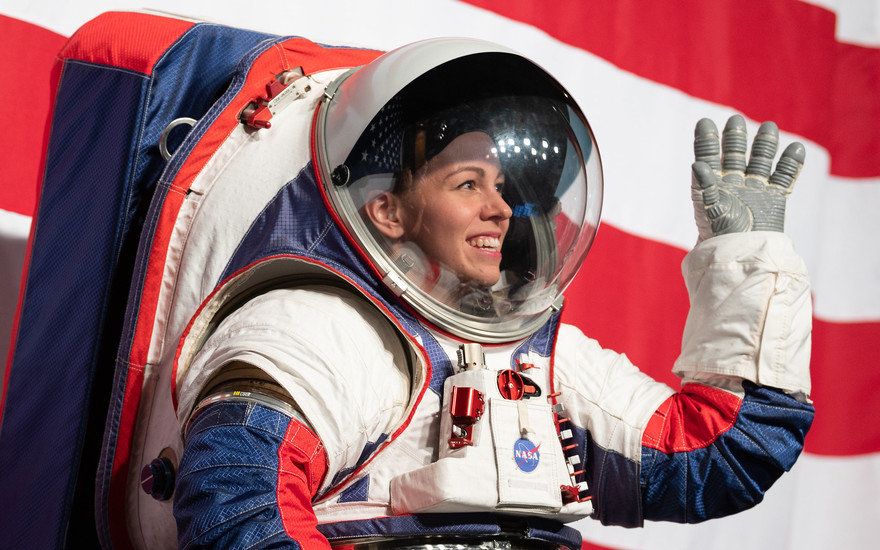 I totally covet this helmet! 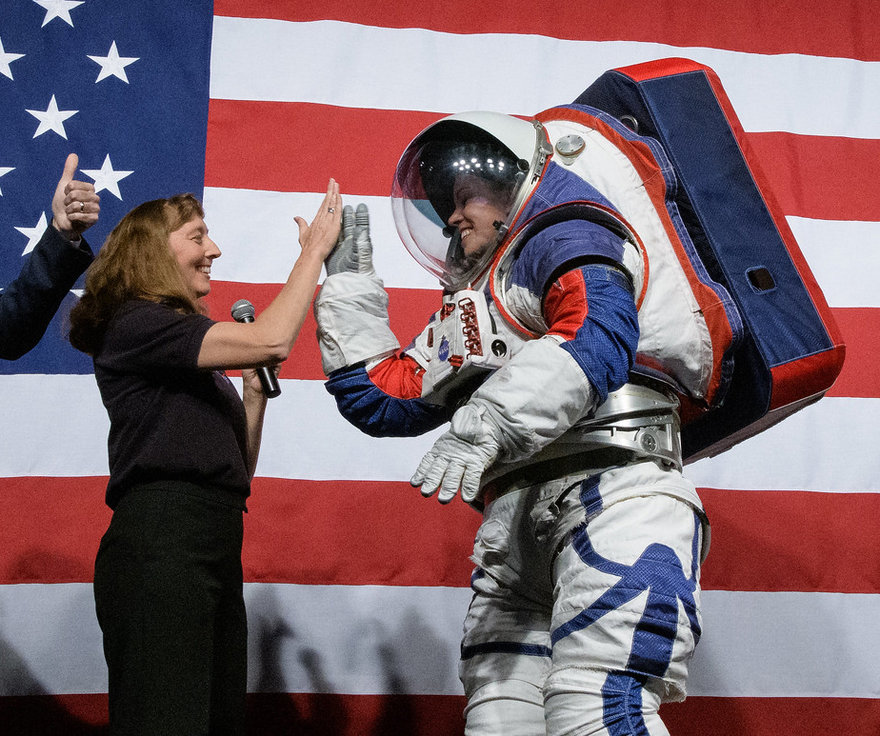 After seeing this photo, I'll never again complain about how bulky my laptop backpack is. 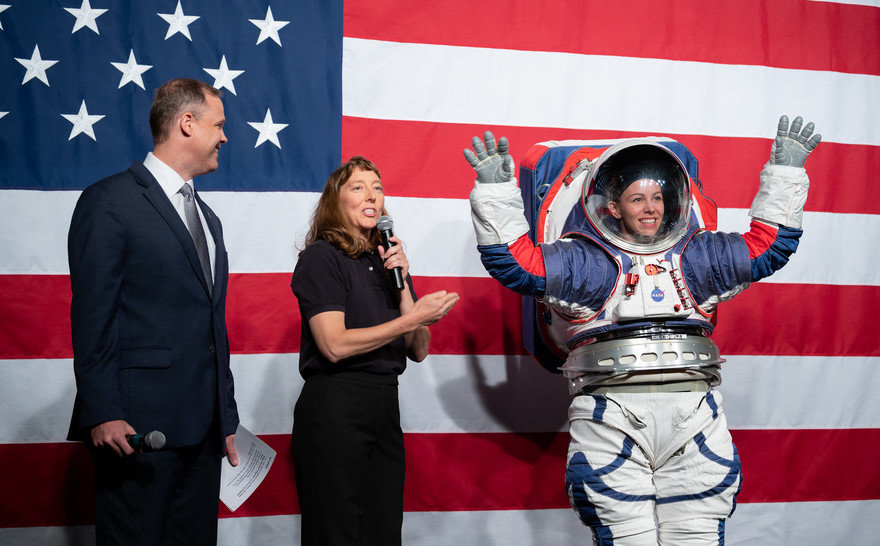 And after seeing this photo, I realize that I have a jacket I never wear because it makes my shoulders look weird. I am probably too self-conscious to become an astronaut.

Multiple news outlets have reported that xEMUs are one-size-fits-all, though none have offered details, and NASA in their own press release has made no such claim. However, NASA has stated that:

In the Anthropometry and Biomechanics Facility at NASA's Johnson Space Center, astronauts undergo full-body, 3D scans while performing basic motions and postures expected during spacewalks. With a complete 3D animated model, NASA can match the astronaut to the modular space suit components that will provide the most comfort and the broadest range of motion, while reducing the potential for skin irritation where the suit might press on the body. 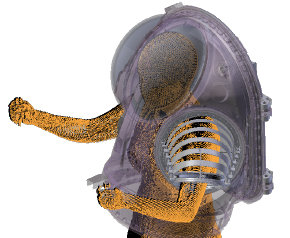 You guys are NASA, and this is the highest resolution image you could provide?

This leads me to believe that perhaps the exterior of the torso component of the xEMU is of a single size, with modular interior components of differing sizes for each astronaut that can be "plugged into" the xEMU suit. But that is admittedly speculation.

As for the Orion suits, NASA's language is also confusing: "The Orion suits will be custom fit for each crew member and accommodate astronauts of all sizes." I take that to mean they are not interchangeable. 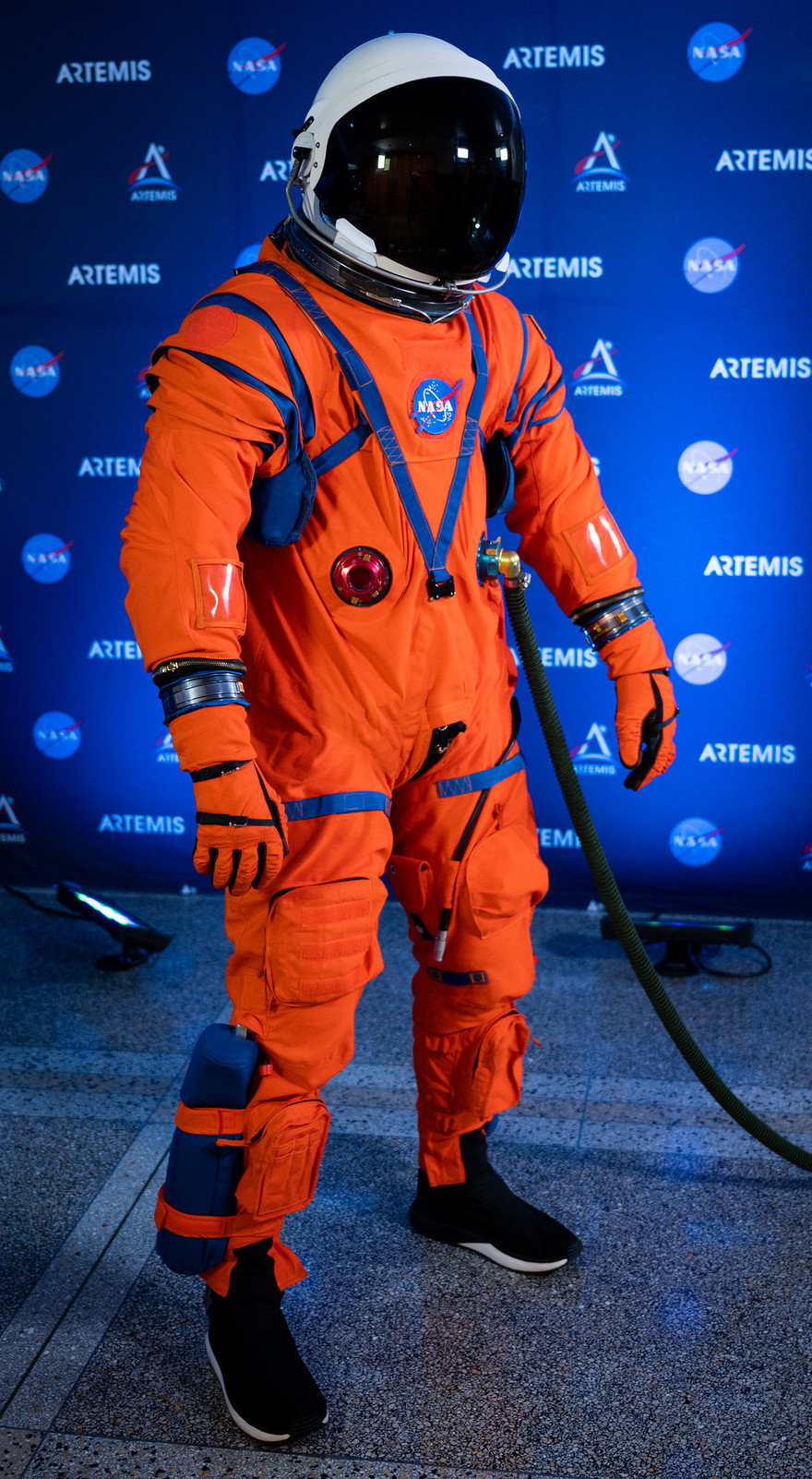 I want to believe that if you press the red button on the ribs, a mechanism inside the helmet dispenses snacks.

In any case, this week NASA administrator Jim Bridenstine tweeted the following:

Lastly: Want to see how astronauts get into their suits? Click here for some Astronaut and Spacesuit Fun Facts. 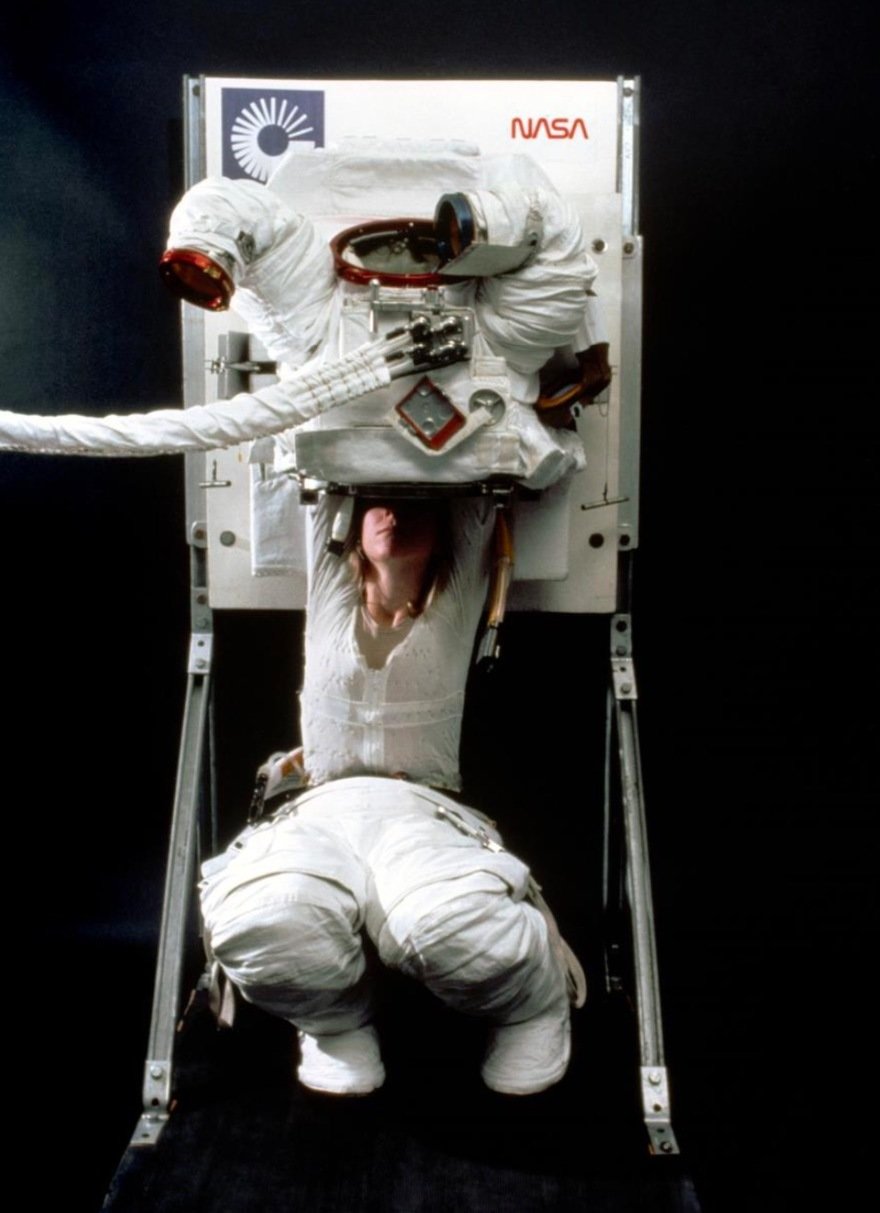