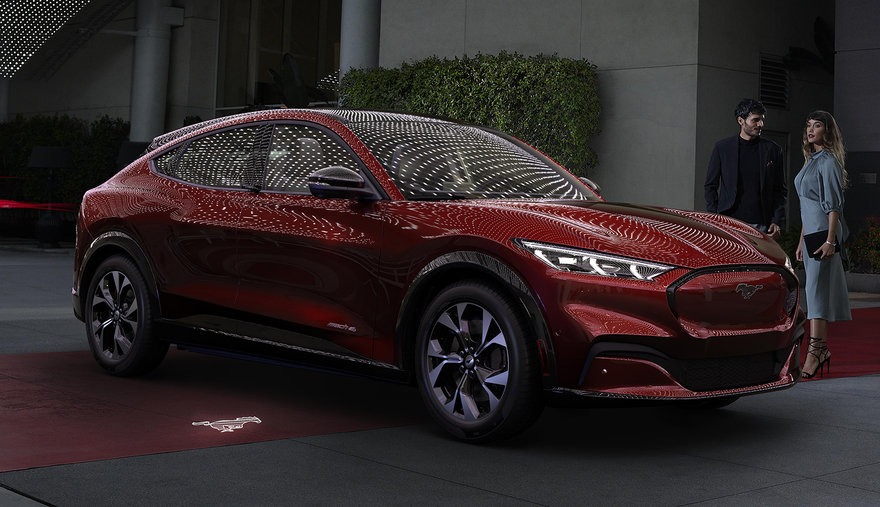 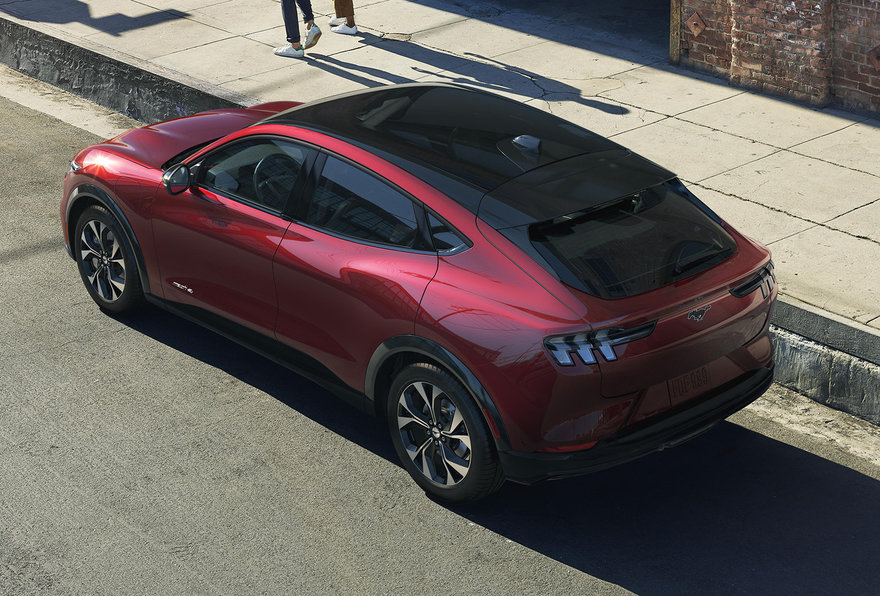 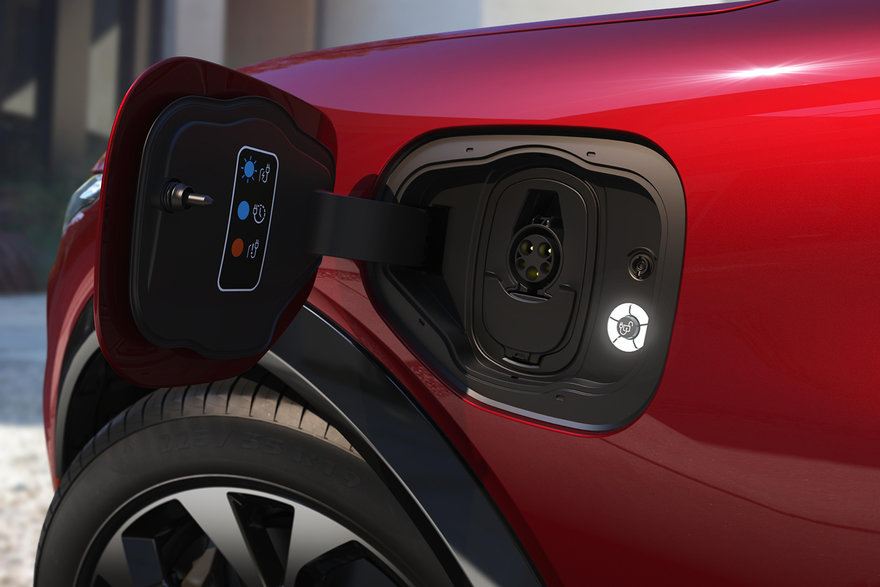 I didn't find much to get excited about in the $60,000 car's specs. It's basically a Tesla competitor: Very fast, electric, can be had in all-wheel drive, and has cutesy names for the driving modes like "Whisper, Engage and Unbridled." So instead I've been looking over the physical design of the car in search of something noteworthy.

Supposedly inspired by their storied pony car, the Mach-E's design doesn't appear very Mustang-like to me; it seems they've simply lifted some visual cues from the original model, like the pony badge on the grill and the three-bar taillights. 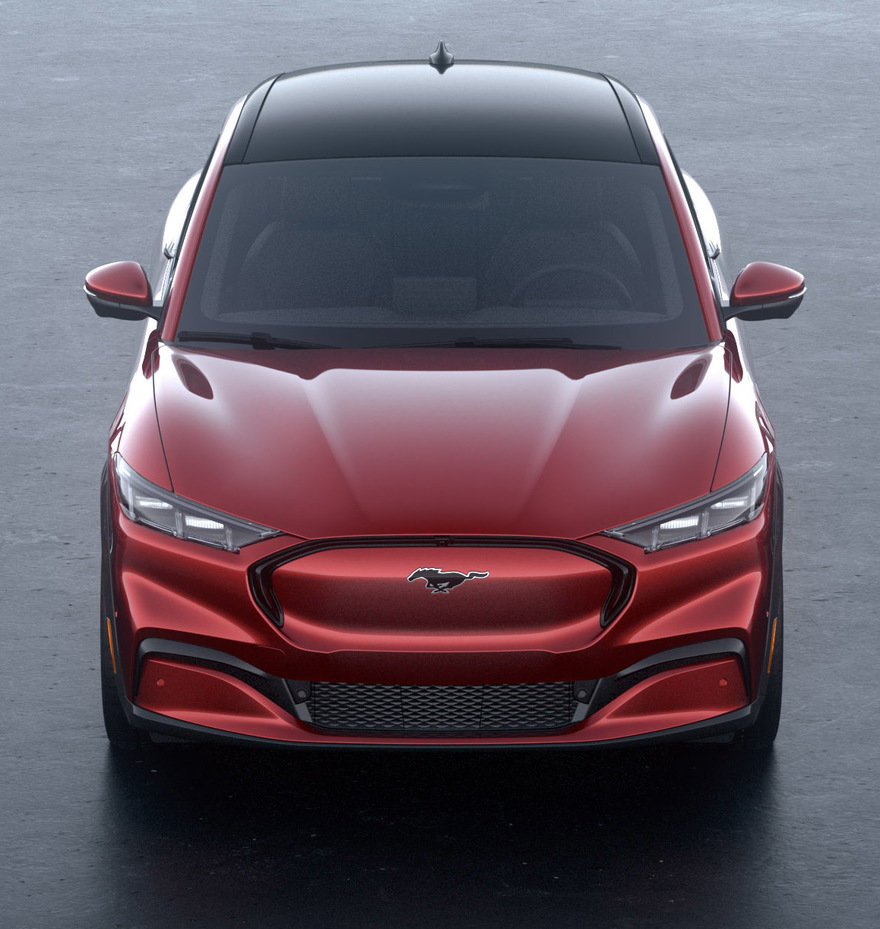 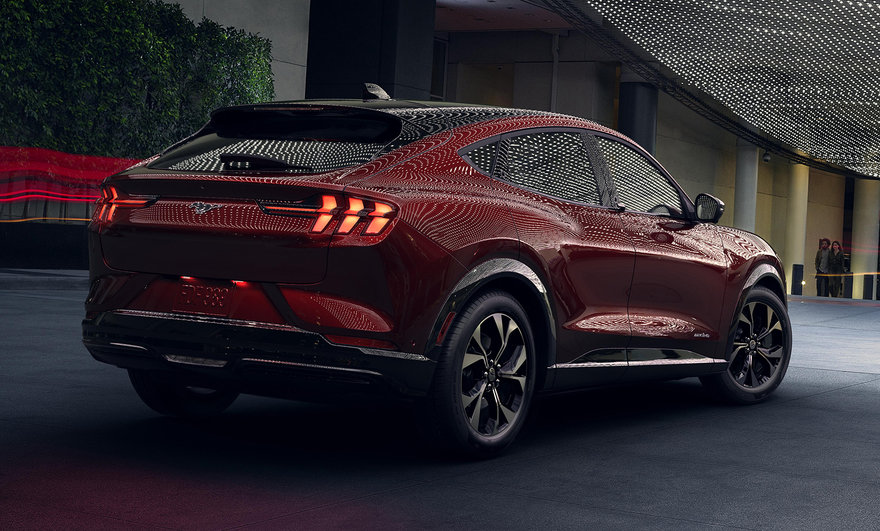 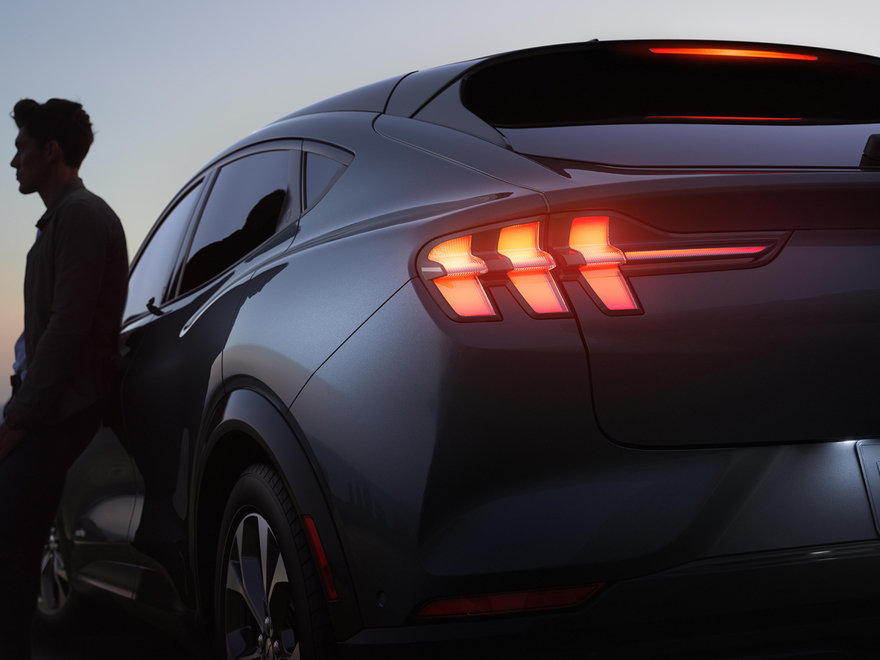 The crossover SUV form factor and lack of an engine doesn't do much to increase interior storage space. The Mach-E's trunk offers 29 cubic feet of storage space, or 59.6 cubic feet with the seats folded down; my Volkswagen Golf station wagon offers 30.4/66.5 cubic feet, respectively. 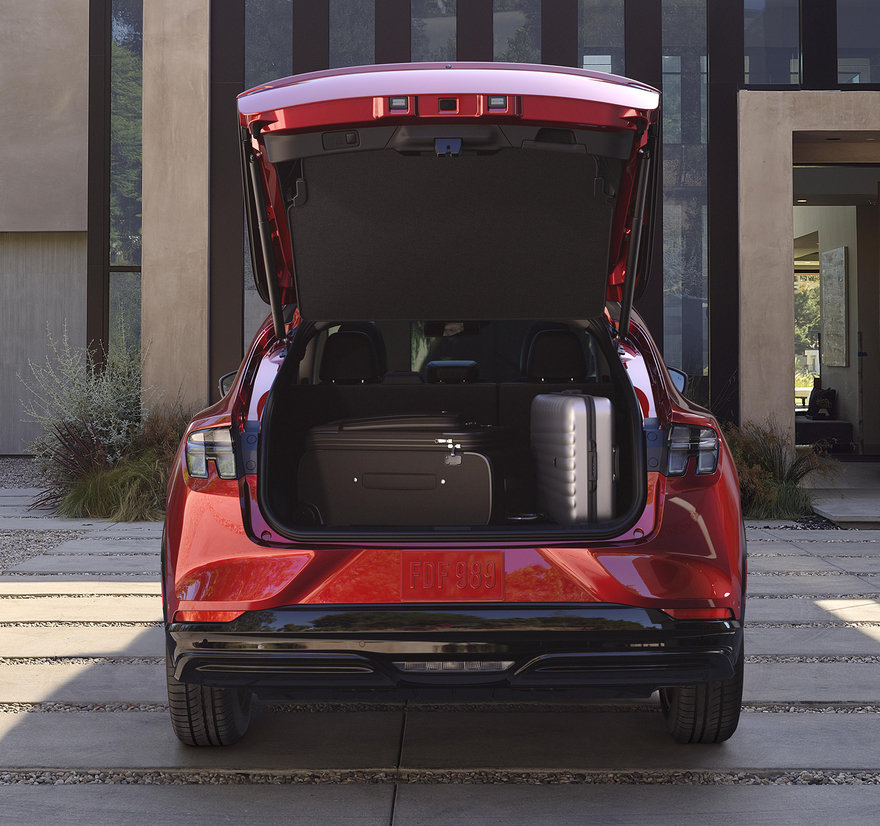 The Mach-E does, however, have an extra trunk in the front, occupying the bay typically taken up by an engine. It's only 4.8 cubic feet--"enough to comfortably store the equivalent of a carryon luggage bag," the company writes--but one thing I did find interesting is that it's drainable. "customers can easily pack it full of ice and keep their favorite beverages cold – perfect for that pre-game tailgate or trip to the beach." 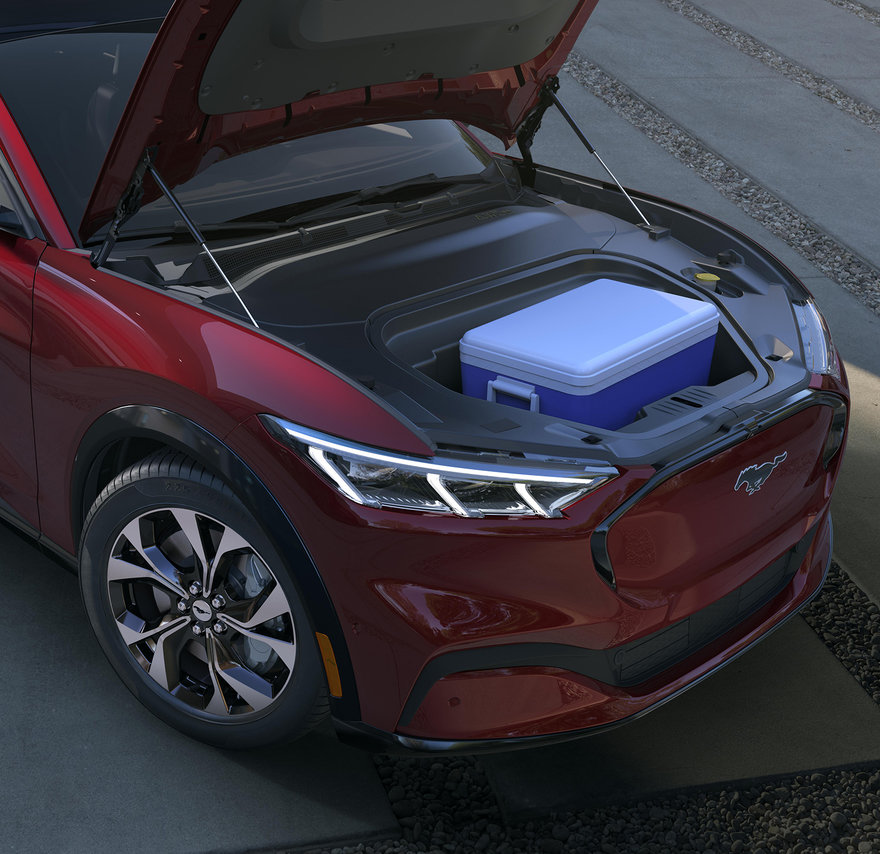 The interior has the same issue that most modern-day cars do: A gigantic screen that does not integrate well with the dashboard. I really do feel that in fifty years, design historians will look back at this era of automotive design and say "During this period, no one really knew how to harmonize the then-newfangled touchscreen with the incumbent design of a dashboard." 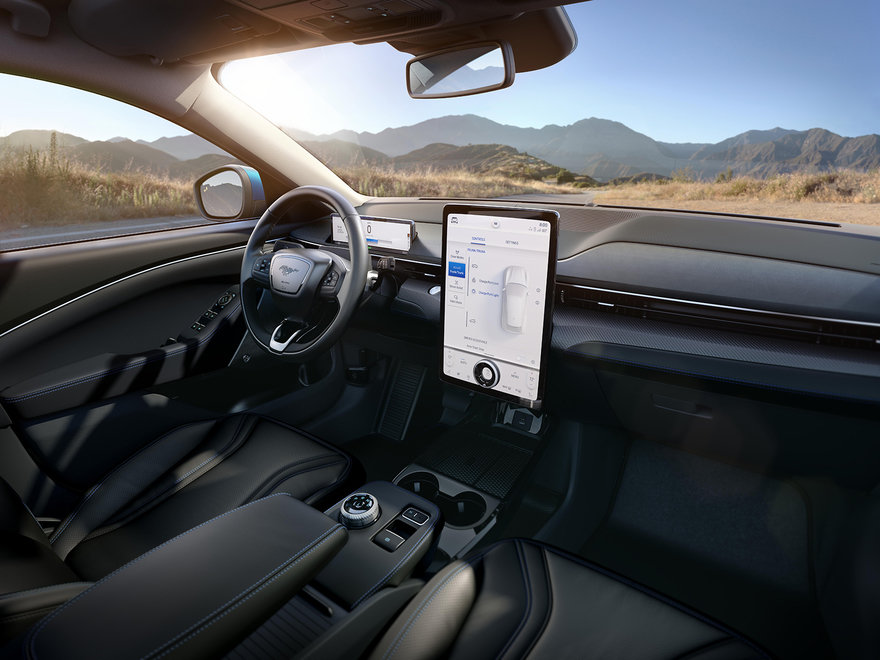 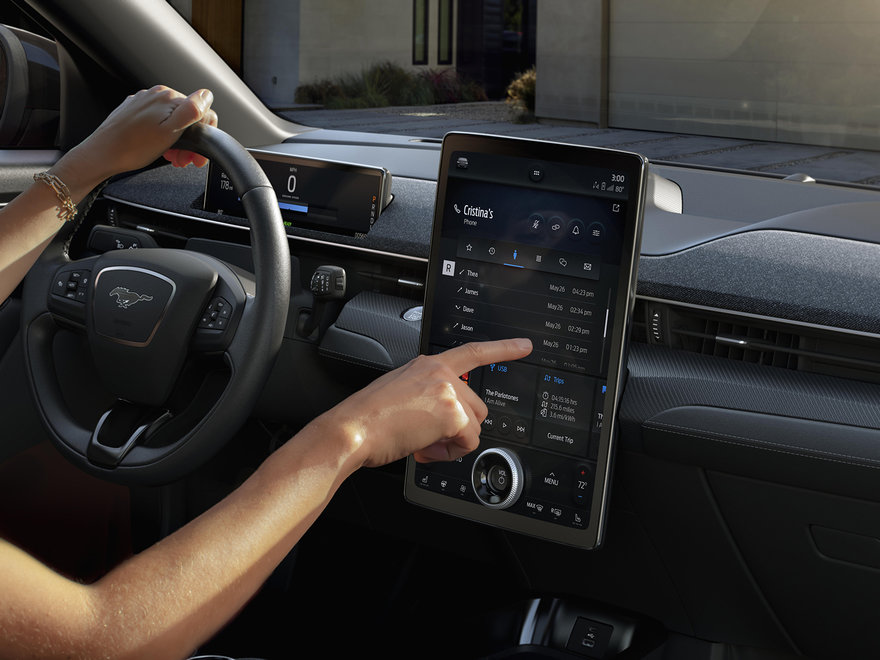 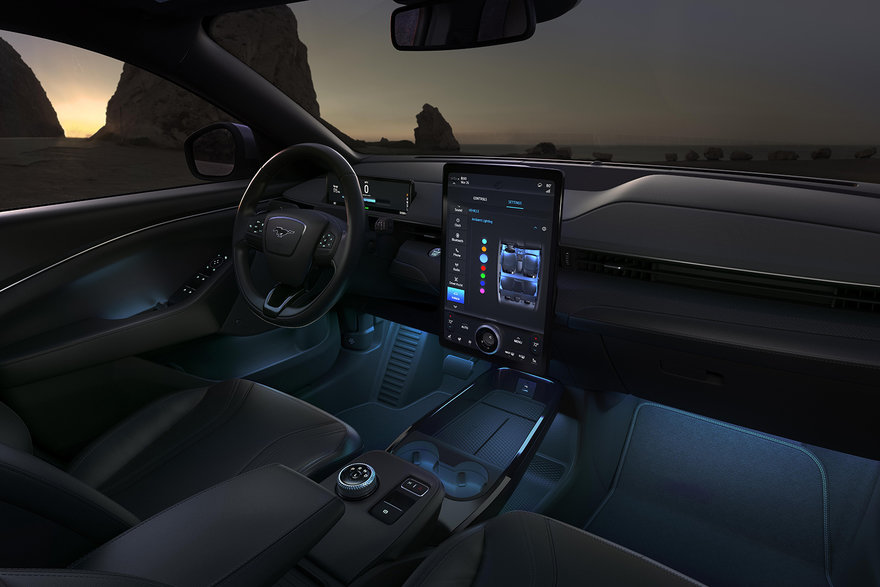 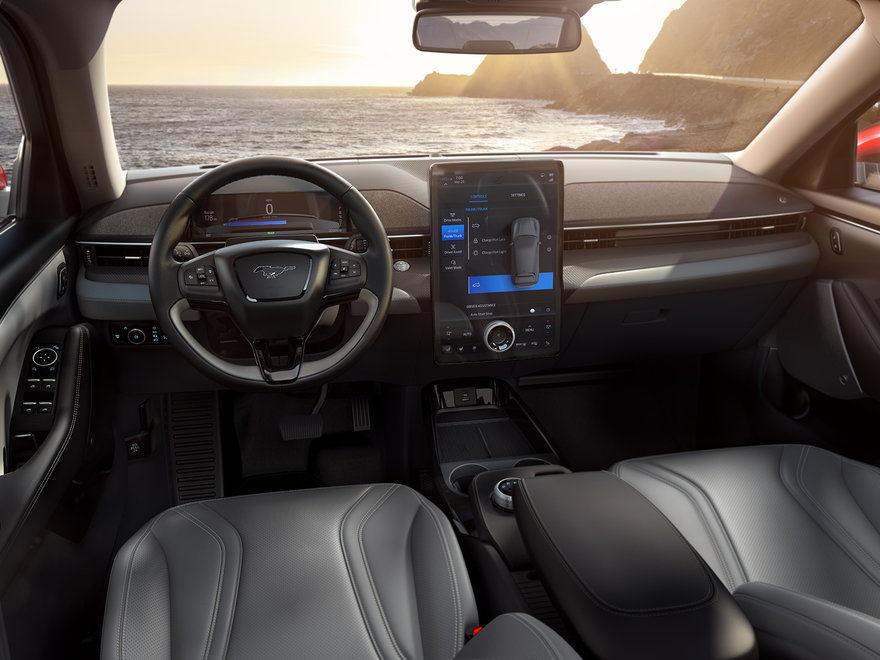 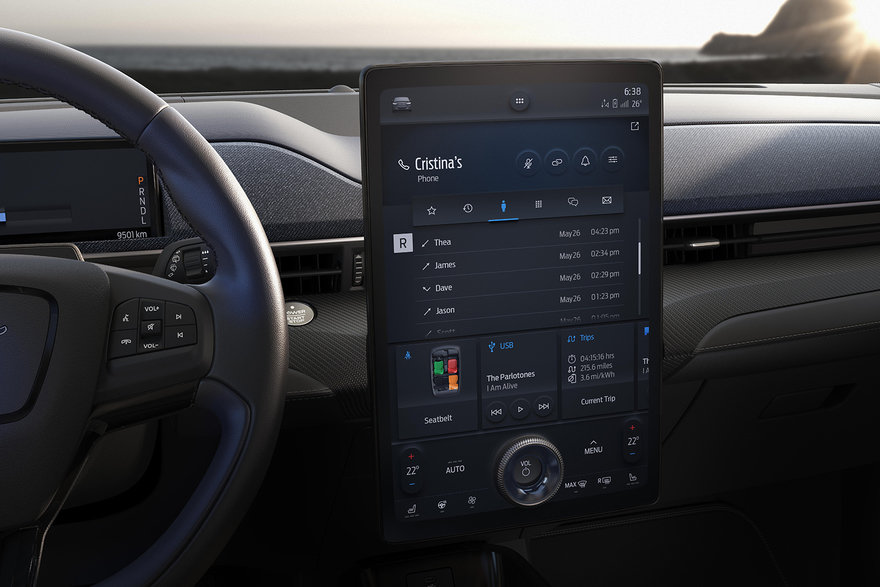 Ford is also trying out a new feature with the Mach-E: "Phone As A Key technology. Using Bluetooth, the vehicle can detect customers' smartphones as they approach, unlocking the Mach-E and allowing them to start driving without getting their phones out of their pockets or using a key fob. A backup code can be entered on the center touch screen to start and drive the vehicle in the event a phone battery dies." 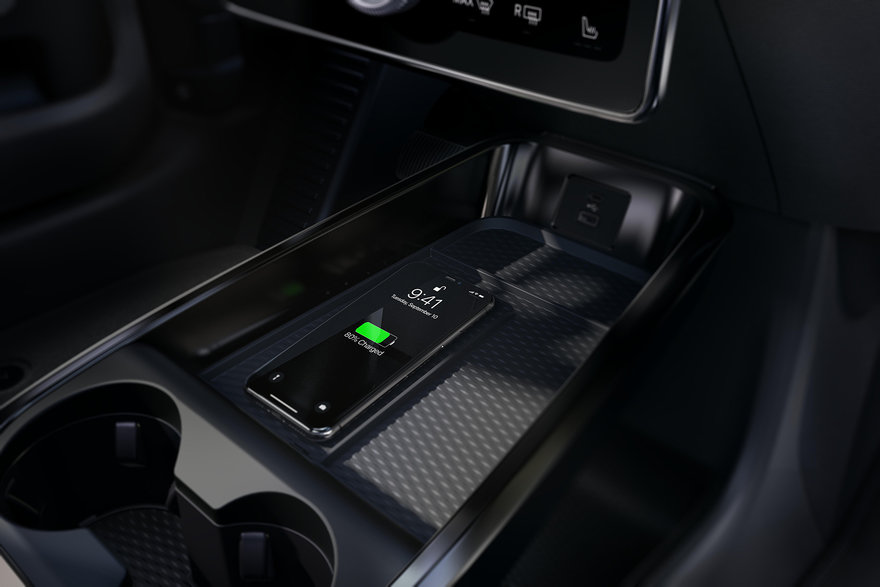 I'm not sure that's something customers want or need, but that seems to be the way technology is leading us these days. Which brings me back to the overall point of this car: The Big Three auto manufacturers cannot like that upstart Tesla came out of nowhere, became the "It" car, and is now expanding into larger vehicles. Ford, like everyone else, knows they have to go electric to compete. That they chose to slap the Mustang badge on this car makes it seem like this is a marketing-driven vehicle.

Still, I don't doubt that it will sell well. I'm guessing there are enough Boomers with a 60k vehicle budget who well remember the excitement around the original Mustang, released during their youth, and who'd like the benefits of electric. But to me the Mach-E just feels inexorable, and I don't mean that in a good way.

Ford is now taking pre-orders for the car here; a $500 deposit secures yours, which will be ready staring in late 2020.