A card game that reminds us our thoughts aren't real, humor heals, and mindful awareness helps build a calmer outlook on life.

Jesse Finkelstein started his doctoral program in a time of crisis. "It was around 2016, and I was just very aware that a lot of people around me in my own community, myself included, were being impacted by the election," he says. "I was very conscious of the administration not being friendly toward sexual and gender minorities. I wanted to be more of a direct help—that was my primary motivation for going back to school. I wanted to put boots on the ground in terms of contributing to help, in my case, with mental health issues."

The designer turned his attention to a PsyD in clinical psychology at Rutgers, and quickly became enamored with dialectical behavior therapy (DBT) as a stress relief and emotional regulation tool—so much so that he, along with his sister Meredith Finkelstein, developed an original game featuring its coping techniques, live on Kickstarter now. And, as the world roils in COVID-19 panic, the pair see a new urgency to their project.

"DBT is a therapy that is specifically geared towards people who experience emotional dysregulation," Jesse explains. Though that often means people who have borderline personality disorder, experience suicidal ideation, or exhibit self-harming behaviors, it's really a set of skills applicable to everyone.

"I personally use the DBT skills throughout my day and my life," he says. "Because they're grounded in mindfulness, interpersonal effectiveness, and recognizing pain without adding unneeded suffering."

"I feel like right now"—as COVID-19 catches all the world's anxious attention—"when there's so much anxiety and fear, which is very real, how can we have a relationship to that fear that doesn't add on additional suffering? I think that DBT is very useful for that." 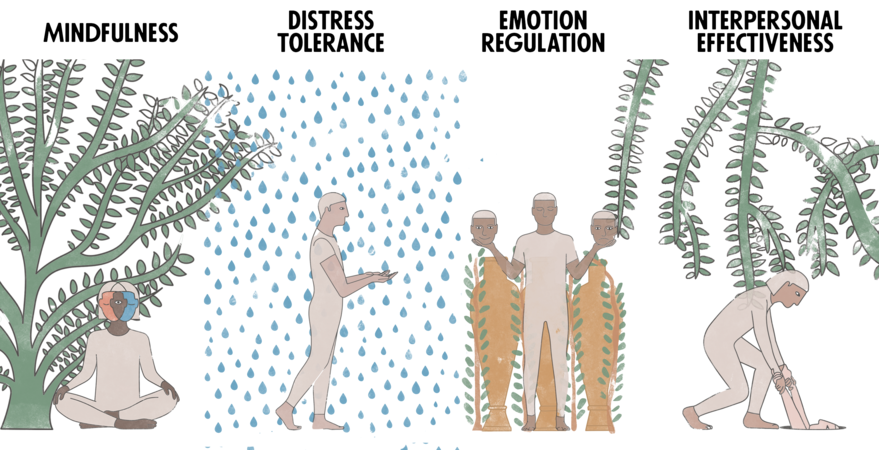 Making a therapy tool into a game

To play the game, each player gets six "skill cards" and the group names one person the "wise mind." That person places a "conflict card" in the middle of the table, then each player plays the skill that they believe is best equipped to resolve the conflict and makes a case for their choice. The wise mind selects a winner for that round. The deck can also be used more like tarot for solitary reflection.

Not many psychological treatments are offered as boardgames. So the Finkelsteins wanted to be sure they'll strike the right balance of grounded tools—which even in a clinical context include aspects of humor, irreverence, and metaphor—and an engaging game you can really play (without feeling like a "loser" at the "game of real life" if you don't win).

"I think the challenge," says Meredith, "is how do you make this a game? How is this different from therapy? Or from talking? And what does it mean to win?"

"I'm really interested in systems design and comparative systems, not just games," she says. "It could be different astrological systems or different conceptual systems. And I think that DBT is a system, right? You can look at it comparatively with other systems and I think the whole question is how can we play with these systems and these rules? That's what turns it into a game.

"It's not like chess—a loss isn't really a loss in the same way. And these are serious issues we really do want people to learn. This can be a game where people learn strategies for their mental wellbeing."

The siblings developed it in collaboration with the Dialectical Behavior Therapy Clinic at Rutgers University (DBT-RU), directed by Dr. Shireen Rizvi—"so they helped with the language around the skills and making sure it could be useful in a therapeutic setting," and fellow researchers did playtests with clients.

There's room for irreverence and humor in therapy

Even if a therapy system seems like a challenge to fit into game design, the use of metaphor and irreverence flows naturally through clinical psychology and The Game of Real Life.

"In DBT, there's a real emphasis on irreverence as a therapeutic tool," says Jesse. "The idea is that by using irreverence, you can help shake someone out of their current thinking. It's a way of helping things appear less hardened or less fixed than they are."

Metaphor helps with this, too. "ACT incorporates a lot of use of metaphor in therapy as well," Jesse says. "with this idea of working with a client to look at things differently. And so the other nice thing about the game is that it functions as a metaphor for clients because it's not necessarily an issue that they themselves are encountering, but they may use it as a way of playing with the skills, not in a situation where they feel dysregulated."

In the game, the Finkelsteins take players out of their own everyday issues with challenges that veer more into allegory and humor. There's a scenario about an Ahab-like sea captain coming to the frustrating realization that he's never going to catch this whale, another about a bus driver announcing to his passengers that driving under 60 miles per hour will trigger an explosion—sounds a lot like the 1994 movie Speed, doesn't it? There are weightier challenge cards, too, like walking past your dealer's house after years of sobriety and feeling an urge to use, but the overall effect of encountering many problems, serious and silly, is meant to be a healthy remove from your own problems.

"I think irreverence helps draw attention to the fact that thoughts aren't real," Jesse says, "that these thoughts are just thoughts."

Why DBT matters in times of stress, from election season to a global pandemic

As I'm speaking to Jesse and Meredith for this interview, Meredith mostly keeps herself on mute—she's flying home from a freelance gig as the government is starting to restrict travel out of the U.S. "We've got older parents, so I know that's a source of stress for both of us, Meredith has her two sons, who she really wants to get home to. This is undoubtedly a stressful time. I think there's no way to not experience it," her brother says.

He sees DBT as a toolkit that's keeping him sane in this trying situation. "I think we're both relatively highly strung people. I'm going to speak for myself here—I experience anxiety, and these DBT skills have become very important in my own life in helping manage my stress and also remain present."

"The word 'dialectic' in DBT describes how multiple truths may coexist," he says. "The truth of this moment is that we are living through a scary and painful pandemic. AND there is the truth that we can all find moments of peace. We need to hold both truths to care for ourselves and others, and to make effective change for the future."

"Everything in DBT is about balance," he says. "On the one hand, it's really important to remain informed, but if you're checking your phone all the time for the latest news updates, you're A) going to burn yourself out and B) it can function as an avoidance strategy. You may need to sit with the discomfort of uncertainty. We live in a time where there's always new news to consume. And I think we really have to be balanced with how we consume it."