Astrophysicist Tries to Invent Anti-COVID-19 Necklace, Winds Up in Hospital to Have Magnets Removed From Inside His Nose

A magnet for trouble

An astrophysicist attempting to invent an anti-COVID-19 necklace had to go to the hospital to have magnets removed from his nose. 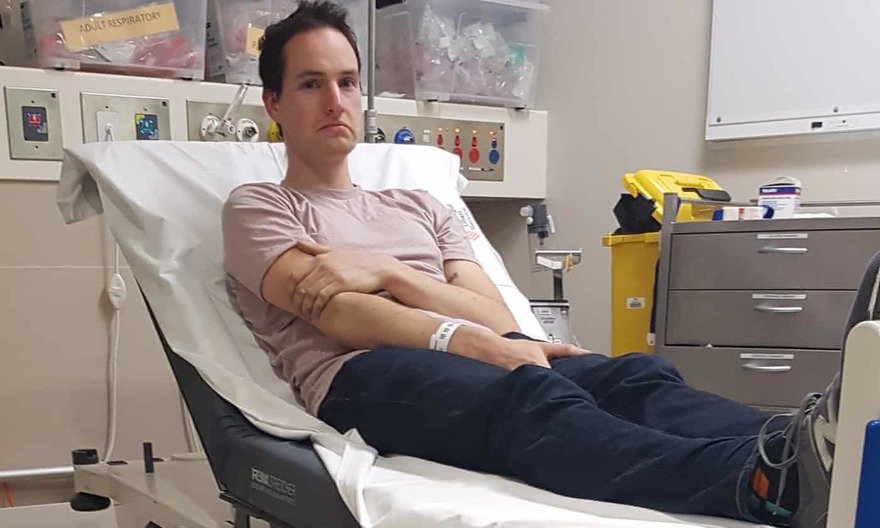 Dr. Daniel Reardon, an Australian astrophysicist, had the idea of a necklace that would warn you if you moved your hands too close to your face. The concept required the user to wear magnets on their wrists, which would trip a sensor in the necklace if brought too close, causing the necklace to buzz.

The first problem was that the necklace worked backwards. ""My invention had the opposite effect – it buzzed continuously until a magnet was put close," Reardon told the BBC.

The second problem is that Reardon didn't put the powerful neodymium magnets away. "After scrapping that idea, I was still a bit bored, playing with the magnets," he told The Guardian. "I clipped them to my earlobes and then clipped them to my nostril and things went downhill pretty quickly when I clipped the magnets to my other nostril."

Reardon said he placed two magnets inside his nostrils, and two on the outside. When he removed the magnets from the outside of his nose, the two inside stuck together. Unfortunately, the researcher then attempted to use his remaining magnets to remove them.

"After struggling for 20 minutes, I decided to Google the problem and found an article about an 11-year-old boy who had the same problem. The solution in that was more magnets. To put on the outside to offset the pull from the ones inside.

"As I was pulling downwards to try and remove the magnets, they clipped on to each other and I lost my grip. And those two magnets ended up in my left nostril while the other one was in my right. At this point I ran out of magnets."

Reardon then turned to pliers--which made the problem worse, as they became magnetized. "Every time I brought the pliers close to my nose, my entire nose would shift towards the pliers and then the pliers would stick to the magnet. It was a little bit painful at this point."

Reardon's partner, who works at a hospital, brought him there. Doctors there (medical doctors) were able to remove three magnets--but a fourth fell down his throat. Luckily, Reardon was able to cough it up, and says "I am not going to play with the magnets any more." 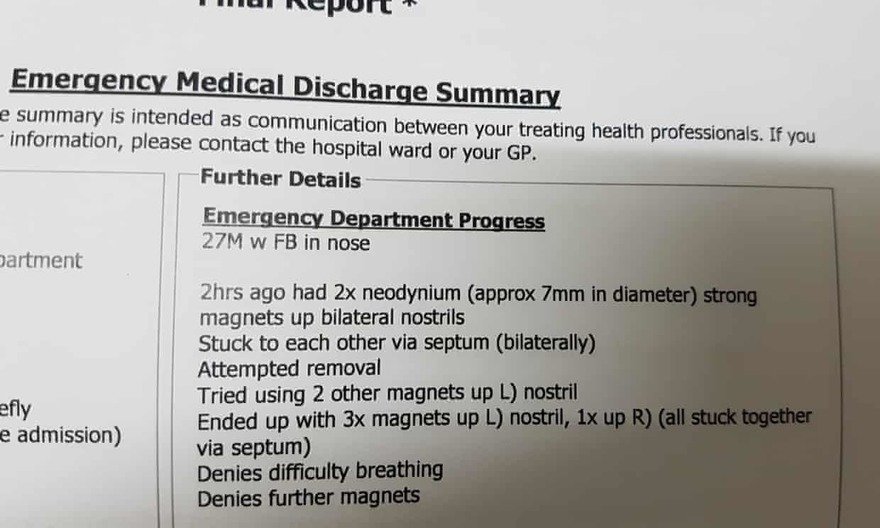 He must have a good sense of humor about the whole thing, as he's the one who provided these photos to the news outlets.

Astrophysicist Tries to Invent Anti-COVID-19 Necklace, Winds Up in Hospital to Have Magnets Removed From Inside His Nose