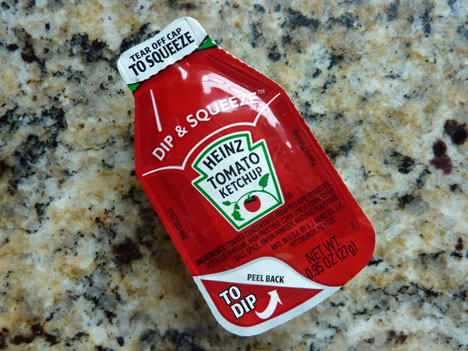 It's been a year and two weeks since we reported that Heinz had updated the design of their ketchup packet, and now they're finally rolling them out. The new "Dip & Squeeze" package design is currently available nationwide, and on March 4th they're doing a promotion with Chick-fil-A where you get free fries if you ask for the ketchup (from 2-4pm).

While many of you might not consider this "high design," this is a great example of a humble product design that millions upon millions of people are going to touch and use every day.

Blog comments from our original announcement were expectedly divisive, with some lauding the package and others decrying it as wasteful. Our favorite exchange was one reader writing "Individually wrapped anything is stupid," answered by the retort "Condoms aren't stupid..."