A couple of years ago, Core77's Dave Seliger dug up History of the IDEO logo, in a post by Scott Underwood, former IDEO jack-of-all-trades. Scott's post shows a clear evolution from version one to version two—and makes it clear that we were ahead of the curve with our identity in both 1991 and 1997. Look at our current logo. It was on the edge of complex expression via combinatorial geometry. This wasn't a popular corporate idea until the mid Aughts, when the redesigned AOL logo was released. Since then, there have been lots of great combinatorial logos, many of which are on our Tumblr. (Just a note on this, we weren't the first. The most famous expressive logo I can think of is MTV's first and that was several years before IDEO.)

Now we're exploring version three. Why? In part, because our current logo is a location-based system. It's not designed to adapt to new situations. For example, look at IDEO U and "design by IDEO" in Scott's post. Today, look at IDEO.org and OpenIDEO. Put those four logos next to our corporate logo, and you'll see some of the same DNA, but the differences are bigger than the similarities. They're primarily static signs or flags, like most logos. They indicate presence, but not intent. 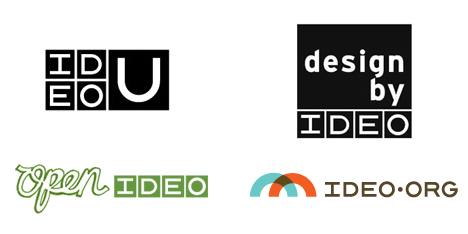 I think this is going to be the direction most identity systems go in the future. Why? In part because new technologies make it possible. Monolithic solutions are a necessity of yesterday, because of the permanence and cost of communication. Now we're in an ephemeral and affordable age, and mass distribution at low cost is possible thanks to the digital revolution.

Now if all this is too academic, check out the Six Themes Tumblr for a visual expression of these ideas and more details about the process we've gone through so far.

There are interesting implications here for global identities and sub brands. This idea of designing behaviors makes sub brands feel like an old idea now. We are exploring what's next, not just for us, but for strategic identity design broadly.

Stay tuned to Core77.com/IDEO as we prepare to launch the Make-a-Thon from our Tokyo office later today!