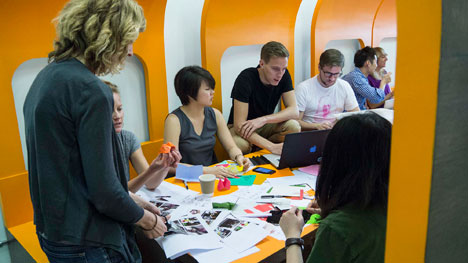 On Monday, IDEO Singapore started the day with Skype cameras on and speakers turned up loud, ready for the Global Make-a-Thon baton passed from the Tokyo studio.

Our friends in Tokyo had spent the morning integrating different aspects of the cultural context of Japan and expressing what it means for IDEO.

In their work, we saw a window into their world. One of many examples included the "I" in IDEO turning into a paper Shoji door that revealed an image from Hanami, the cherry-blossom flower viewing.

Other themes that emerged from our talk with Tokyo included gamification and the local transposition of their daily lives, contexts and environments. 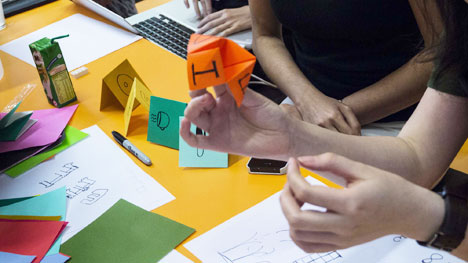 Three of our early concepts here in Singapore:

1.) IDEO Everywhere: Ben Forman and his team used photos of "I" "D" "E" and "O" snapped around Singapore to create a recontextualized logo. Bamboo fences, bowls of noodles, cups of tea, and bicycle wheels, in shapes that represented the letters of IDEO, were just a few of the many images that serve as the building blocks of IDEO. Inspired by Japan's Shoji door concept, Amy Bonsall and her team hacked away at what a window to the world would mean for Singapore—in these cases, a heritage shophouse shutter, or a plate of Singapore's national dish, chicken rice.

2.) Alternate History: One of our designers, Yishan Lam, said she's always seen Chinese name chops (a seal that's often used in lieu of a signature in Asia) in the elements of the four red "IDEO" logo squares. She experimented with changing the "I" to the Chinese character for love, which is pronounced "eye." Another variation on the same theme included a representation of the food diversity in Singapore, with each character formed by a different cuisine, all found within the bounds of the island: Hong Kong toast, basmati rice, ramen and roti prata served as visual ingredients for the letters.

3.) Experimenting with the Physical: Three 3-D concepts emerged. Why physical? As Jens Wiemann put it, "In IDEO it's always about doing with your hands, fast prototyping, doing a lot of stuff instead of just talking about it and trying it out." Referencing Tokyo's "windows" he thought about the materials that might shape the logo, including rope, steel and tubing. Philip Man and Keith Oh's team tried out a series of 3D cubes that went from larger to smaller. These could represent stories, ideas or the journey of a project. They represented the divergent/convergent nature of design. Finally, Nancy Xu and her team hacked away at a childhood origami game that spans across cultures. The Germans, Dutch, Chinese, Singaporeans, British and Americans around the table had all played a version of it. The paper object opened up to reveal IDEO's values underneath the flaps. 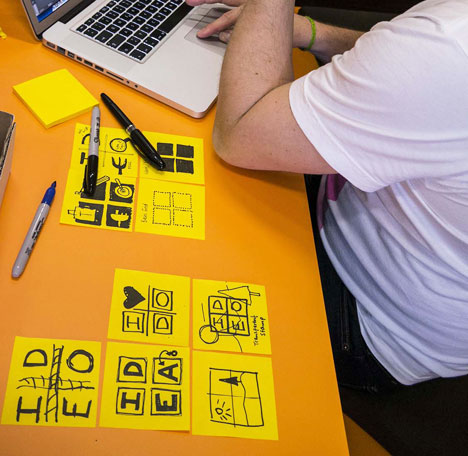 Pete Overy summed up the Global Make-A-Thon big picture for IDEO Singapore: "It's interesting to see how something that could look so classic could start to come to life through different kinds of media—across the digital space and in physical media. Just as Google can iterate on its logo for Van Gogh's birthday or for holidays, we're now able to make what represents us be more than four squares. We are able to bring the classic shape to life through these new expressions of who we are, what we do, and why we do it."

Check out Singapore's concepts on our Six Themes Tumblr site.