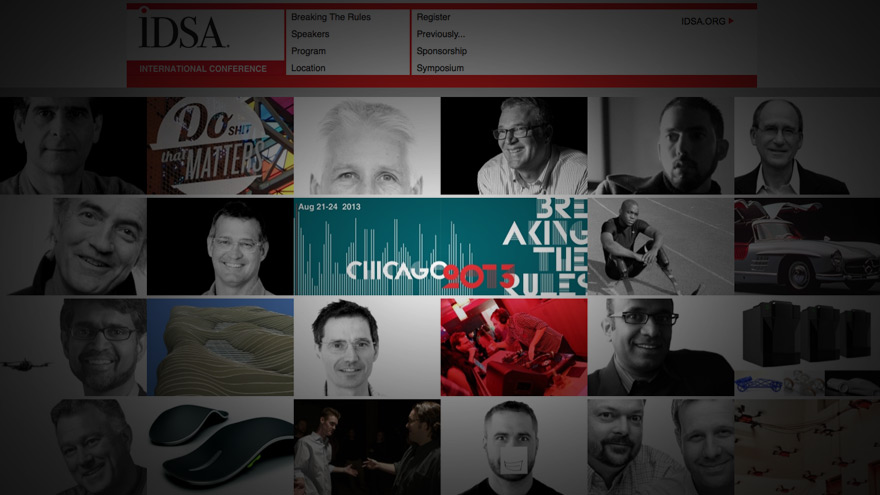 This past weekend was the occasion for the annual IDSA International Conference, the premier professional development and networking event for Industrial Designers practicing in the States... and, as Conference Chair Paul Hatch noted, increasingly from abroad as well. The ever-self-deprecating Founder of Teams Design MC'd the lecture sessions, as noted sketchnote-taker Craighton Berman busily filled several posterboards with his pithy yet expressive doodles. "It's been while since I have been to an industrial design-specific conference," he writes on his blog, "So it was interesting to step back into the industry conversation." 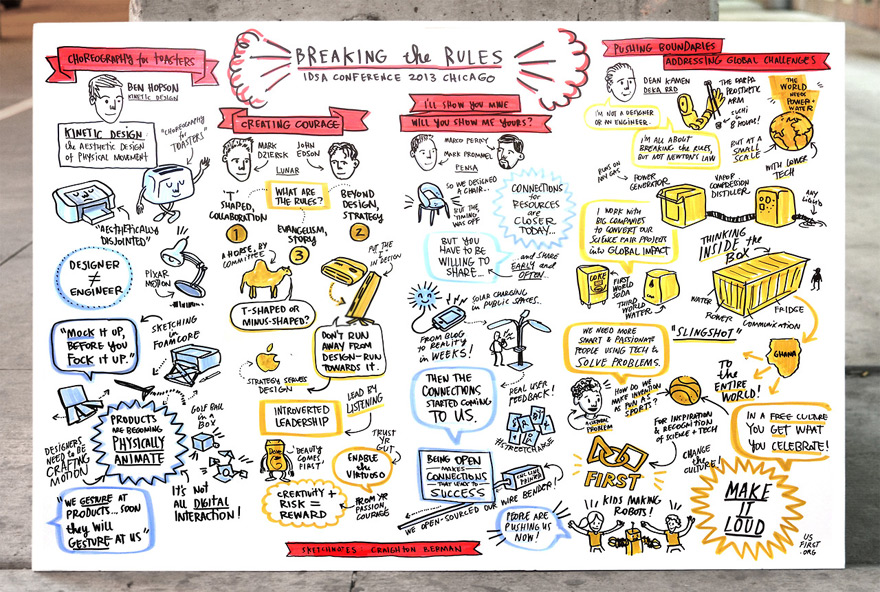 Friday morning started with Brooklyn-based Ben Hopson—who we'd recommended for gainful employment some years ago—who has established a niche in what he calls "kinetic design," which has traditionally been the domain of engineers (as opposed to designers, who define the formal language but not necessarily the moving parts). Leading with the example of the highly articulated output paper tray of a Canon printer, Hopson demonstrated how a designer might approach the problem precisely by applying his or her sketching skills in three dimensions in order to "make sure they look like how they move and move like how they look."

Origami is certainly a reference point, but the kinetic experiments (which Hopson teaches at Pratt) perhaps better construed as three-dimensional pop-up books. "Today, we are beginning to gesture at our artifacts," he noted. "And they will eventually begin to gesture at us." [Ed note: Hopson has also explored the topic at length in an essay here on Core.] 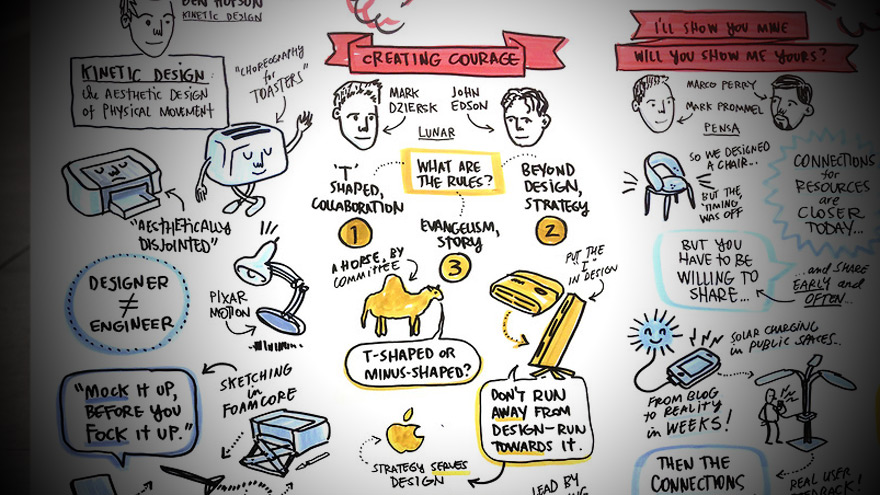 Mark Dziersk and John Edson of LUNAR took the theme literally, tackling three potential fallacies in design practice today. They recommended departuring from the rigorous mandate for collaboration and the fabled 'T-shaped designer' in order to encourage deeper, more focused investigation; reviving the artifact in the face of strategy and research ("design is the original branding"); and rejecting design evangelism in favor of "enabling the virtuoso." Edson cited examples from his new book, Design Like Apple, which Jim Couch later in his over-the-top design sermon (more on that below). 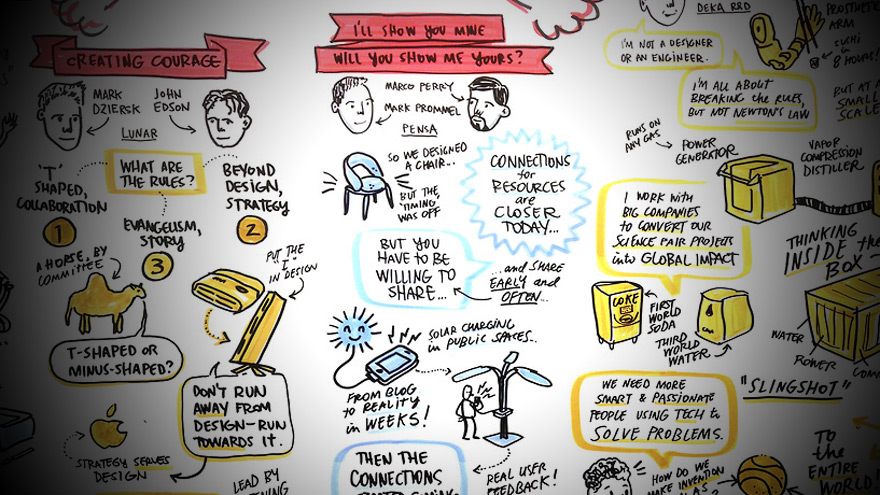 Marco Perry and Mark Prommel of Pensa took a different tack, opening with a whirlwind overview of how every stage of the design process is becoming more open—and why we're better off for it. They shared the amazing tale of Street Charge: Initially conceived as an experiment for extending the workplace into a tech-friendly public sphere, the concept caught the attention of everyone from solar-power purveyors Goal Zero to AT&T and the City itself.

While Perry and Prommel noted that they were rewarded for openness at every point during the process of developing Street Charge, from the very first prototype to the recently-launched pilot program, the story of their [Core77 Award-winning] DIWire Bender offers a more nuanced account of the upshot of openness. Even after they released the entire code and instructions for the tabletop wire bender, Pensa continued to receive requests for a finished plug-and-play product. They will be introducing the product shortly. 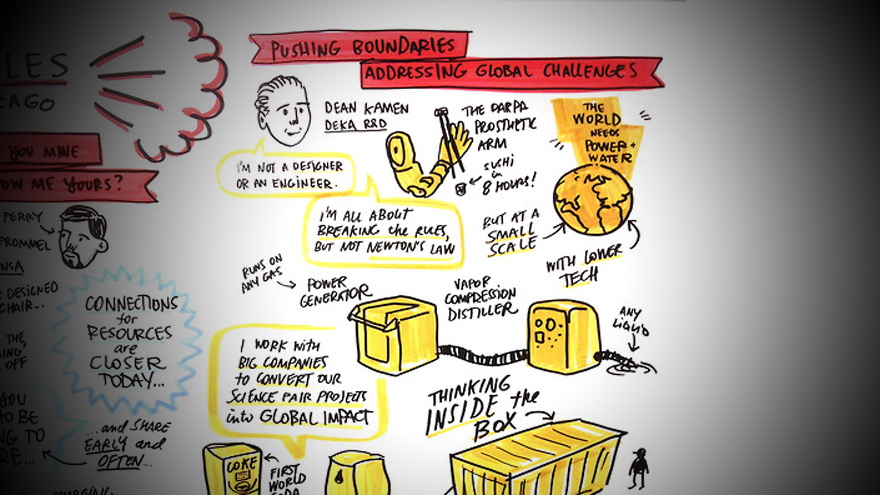 Inventor and entrepreneur Dean Kamen closed the morning session with a moving survey of his efforts at design for social impact. He explained how he ended up partnering with none other than Coca-Cola in order to bring clean water and power to the farthest reaches of the developing world, namely Africa, with their "Slingshot" water technology. With the unparalleled distribution network in place, he ultimately hopes that the device—which can purify up to 300,000 liters of drinking water (from even the most highly contaminated sources) per year, enough for 300 people—is just the first step to concrete results in impoverished regions.

Although a disappointingly small fraction of the attendees had heard of FIRST, Kamen's initiative to spark K-12 students' interest in science and technology, the conference-goers proved to be a captive audience for expanding the program. Billed as an extracurricular activity (not unlike team sports), FIRST offers a platform for applied science and engineering, with some $16 million in scholarships for top-placing competitors. 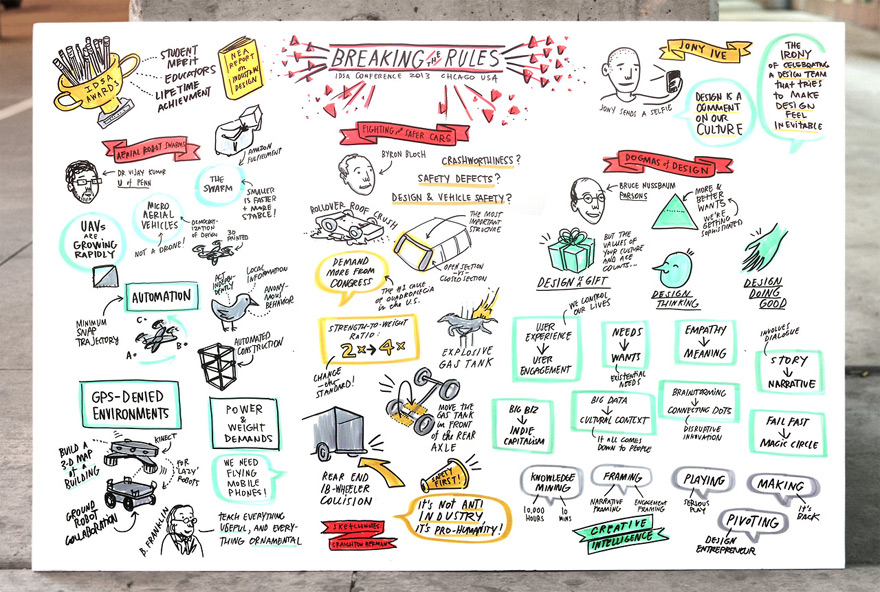 Following the lunch break, the two afternoon sessions offered more insights and lessons from the likes of Inventables' Zach Kaplan and Future's John Bielenberg, neatly summarized in Craighton's sketchnotes above and below. Our preview Q&A with Dr. Vijay Kumar certainly piqued our interest in his Tiny Flying Robots, which duly received "Oohs" and "Aahs" from the audience; Bruce Nussbaum elaborated on Creative Intelligence; a special guest appearance by Jony Ive (via video) was a nice gesture, and NEA's Bonnie Nichols put in a quick plug for their highly informative new report, Valuing the Art of Industrial Design. 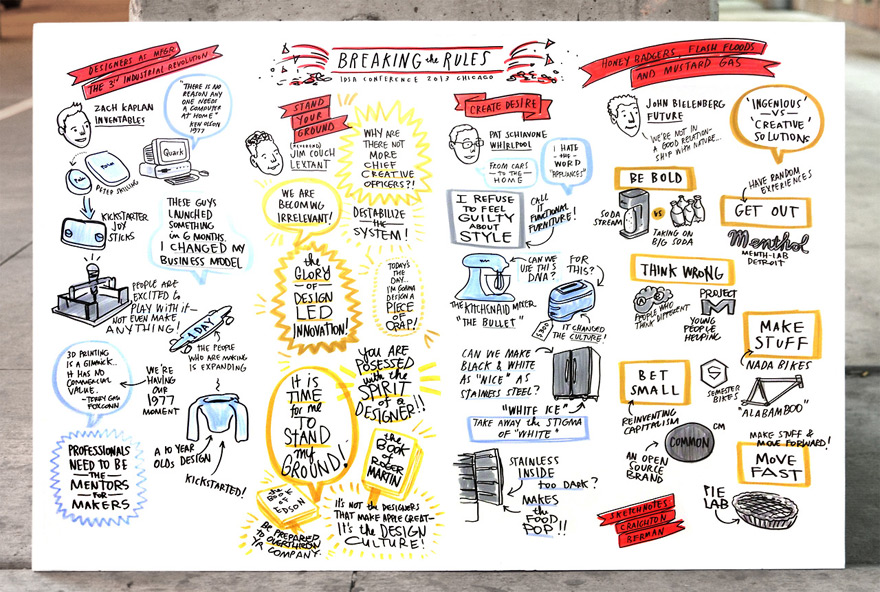 Click for full-size image
Click for full-size image But the high point of the afternoon was a fiery exhortation on by Jim Couch of Lextant. Here, the sketchnotes fall short: Couch convincingly pontificated à la televangelist, imploring his flock to defend design in the face of C-Suite ignorance: "Next Monday, I want you to walk in prepared to overthrow your company from within." I have yet to hear if anyone heeded his seditious suggestion, but it doesn't detract from his final piece of advice: "Remember, question everything. Stand your ground. Break the rules. Design will not back down."