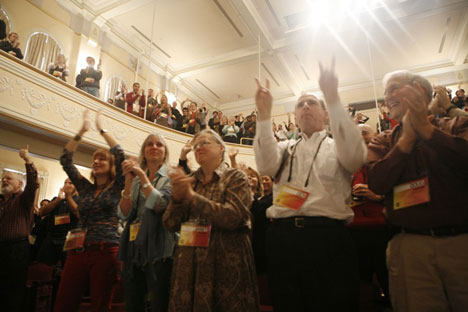 There's no doubt that a great turn on the conference stage has catapulted more than a few designers to fame. So I thought asking conference directors to divulge their proprietary secrets for selecting speakers would be like trying to get Ari Gold to move his Ferrari: You just don't ask. But as I reached out to a handful of conferences, each one was enthusiastically open to passing along some tips. In fact, when I asked Mark Hurst, director of the Gel (Good Experience Live) conference for his advice, 30 minutes later he published a full-on guide to how to become a Gel speaker. In it, he included the most salient piece of advice that should be heeded by all speaker wannabes: Just buy a ticket. "If people only are interested in Gel to get on stage, that's generally a clue to me that they're only interested in exposure and not really in Gel itself," says Hurst. Other directors agreed. Being a part of the conference community is the most direct path from audience to stage.

So say you've attended a few years, and you think you've got an idea that will be of value to the conference. First, be sure to do the legwork yourself. "Under no circumstances should you have a junior person (or worse, your PR firm) send an generic inquiry letter," says Andrew Zolli, director of PopTech. "It's disrespectful and shows that you have no interest in the subject, the organization, or anything other than self promotion. It actually hurts your cause." However, there is one major exception to having another person inquire on your behalf, says Hurst: "I pay attention to any recommendation from a past Gel speaker, or from any longtime Gel attendee."

Your pitch should arrive via email—conferences sites often have a place to submit them—and be short but authentic. "We can smell a packaged, generic proposal a mile away," says Michelle Stanek, director of AIGA's upcoming Make/Think conference in Memphis this October. "If you're just trying to make the conference-speaking-circuit, move on." Stanek suggests a brief bio with a 200-word presentation description that includes why it's appropriate for the audience, as well as the takeaway, be it skills, knowledge or simply inspiration. "Be specific as to the content of the possible talk and pull out a couple of interesting factoids," suggests Zolli. "The point should be how you're going to add value to the event, not merely derive value from it."

Also include evidence of your impressive onstage presence. "To vet presenters, we rely on first-person eyewitness accounts or video," says Gaby Brink, co-director of the design and sustainability conference Compostmodern, to be held in February in San Francisco. "You've probably heard that the most famous people are sometimes the most dreadful presenters—you can't just rely on name fame. There's no better way to convey your stage presence than to, well, show it." Most organizers suggest putting smoothly-edited videos online that will help show you can not only enunciate, but you can hold a crowd's attention. Coverage of your talk by bloggers in the audience also helps the organizers sense the vibe in the room. "If you have the most amazing career, portfolio and insights, it doesn't mean you will be an engaging presenter who can make the crowd laugh, cry and write notes furiously," says Stanek.

Organizers are also looking for a range of presenters, which means differentiation is key. "One of the things for which we've gotten positive feedback—and that we carefully consider—is a balance of diverse topics," says Brink. "We bring in designers from a broad spectrum of disciplines: business leaders, manufacturers, strategists, folks representing media, etc. A presenter might want to point out what unique niche they would fill." Indeed, it's often the non-designers, or those on the fringe, who have the best chances of being selected. "The speakers who are rated the highest by attendees are usually those outside of the direct design community but who have some understanding of design," says Larry Hoffer, deputy executive director of the IDSA, whose international conference Project Infusion is in Miami this September. "Designers talking to designers only works when the speaker has practical and unique information that attendees can implement upon their return home."

Even if you do everything right, thematic constraints might not make for a perfect fit this time, cautions Zolli. "Will they add to the particular conversation we want to have?" says Zolli, who has chosen the theme for this year's PopTech as America Reimagined. "Taken together, the above won't guarantee someone a slot at a conference, but it will create a context where one might be offered, if it's actually appropriate." So this might not be the year. In that case, buy a ticket, make friends, sit back, and take notes.

Alissa Walker will be moderating the Student Symposium at AIGA's Make/Think.