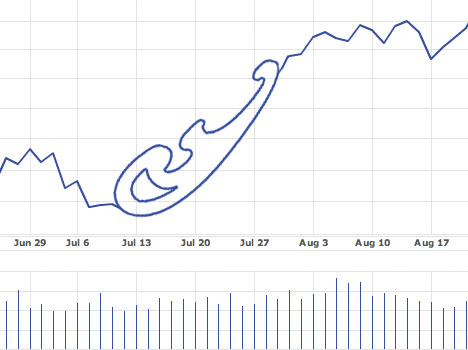 Raymond Loewy once quipped "the most beautiful curve is a rising sales graph," but most designers would rather busy themselves with a Sharpie than a spreadsheet. Even so, design and business have come to a confluence, with design increasingly viewed as a driver of business. Consequently, when looking over submissions of books to review at Core77, we've seen a profusion of design-meets-business books over the last year.

Most of these books are pitched toward executives to teach them about design strategy rather than the other way around. Industrial designers are supposed to know a little about everything—from materials science to engineering to art—but as design is increasingly brought into the boardroom, number crunching is making its way to the easel. Although CFOs have let their opinions on cost controls sway design thinking, it's finally being recognized that designers might have lessons to teach the number crunchers as well.

Business books have long depended upon war analogies. In the '80s, Sun Tzu's The Art of War made its way to more than a few CEOs desks and businesspeople saw themselves as warriors. While combat analogies may not be appropriate for this era, the division of thinking between "strategy" and "tactics" may still be of value. Success in business certainly does have competitive elements, but when examining the behavior of American businesses and consumers in the days before the "Great Recession," we can see that a series of understandable tactical decisions led to a strategic catastrophe.

Having recently reviewed Classic Cars, I found that the history of automobile advertisements over the last 100 years provided as much insight into recent business trends as whole issues of the Journal. After Henry Ford's innovations on the assembly line, the American automobile industry secured itself the leading spot in car production, paving the way for US ascendancy in manufacturing in general. Then, year after year, while the posters continue to sell the dream of car ownership, the ratio of US to foreign car posters steadily declined. The Big Three pushed a variety of stylistically different but functionally identical cars, while other manufacturers innovated in scale, technology and manufacture. Looking at their financial statements over that same period of time shows that as margins began to fall from their highs in the '50s, considerable efforts were made to cut costs through outsourcing and by the '80s, the company was pushing (and we were buying) their highest margin products—trucks and SUVs. Unfortunately, those vehicles were high margin due to lower government safety standards rather than innovative technology and high value. Efforts at innovation, when they occurred (such as the EV-1), were abandoned in favor of the profitable truck segment. None of these individual decisions was wrong with regard to the bottom line, but by the end of the century, the US automakers' individual tactical successes had contributed to a strategic failure.

Over the same era in the United States, the Gini index of inequality had risen steadily since the end of WWII. With this rising inequality came increased risk taking and lowered personal savings, accompanied by improved telecommunications, democratization of the stock market and automated trading. People no longer bought and held equities; instead, they traded them. Once corporations became viewed as no better than their last quarterly earnings target, CEOs began to frame their goals on a 90-day time line. Unfortunately, racing to improve quarterly results is incompatible with long-term strategy, so that trying to satisfy the ephemeral money managers of Wall Street every month means that the company cannot take on the sorts of forward-thinking projects that assure business success. Quarterly numbers, therefore, are not the only metric that a manager should look to. Indeed, Loewy was remarkably sage in his observation: rather than talk about profitability (driven by corporate structure), he addressed sales (driven by the most important constituency: the customer).

Business wisdom dictates that market share is profitability in the bank. In other words, a company with high market share can increase its prices, which will increase its profitability while lowering market share slightly as some customers defect to lower cost alternatives. Hartmut Esslinger of frog design's recent book A Fine Line takes this concept one step further, with what he calls "Innovation Capital." While innovation capital can't be seen in the income statement or the balance sheet, it is more important to the long-term health of the business than any one quarterly result. Although Esslinger might be a little biased, designers are pretty lucky, since the heart and soul of innovation capital is us.

Whether talking about Apple's success or GM's failure, any company in the business of selling things to people should be in the design research business. Consequently, industrial designers can pitch themselves as a critical interface between a company and its customers. While it's now in vogue for CEOs to assess the customer experience by checking into their own hotels and actually using their own products, when confronted with the realities of volatile share price or increased pension liabilities, suddenly they lose sight of that vision. It is our job as industrial designers not only to shepherd that vision, but also to articulate it to management. Esslinger distills the "The Creative Business Strategy" into a simple formula of "Process + Culture = Profits." This arithmetic puts years of business books to shame. In times of panic, the natural inclination is to slash expenses to increase profits. Unfortunately, that's putting the cart before the horse. Sales and profitability grow out of a culture that uses an innovation process that embraces customer needs and converts them into products. Efforts to affect profits directly by cost cutting are quite likely to damage the very culture and process that generated those successes in the first place, and many successful businesses got their starts by sticking to a strategic vision in troubling times like these.

Of course, I do not propose that operating efficiency be ignored. Instead, simply note that the design process that creates breakthrough products is rarely followed with the same rigor in subsequent products. If done right, the process begins with the customer. The design team analyzes customer behavior, finds a need, and refines a customer desire into a product or a solution through rigorous testing and prototyping. Once done, management approves the concept and then tasks engineering to study feasibility and costs. In these early stages, design and engineering work together to forge compromises between cost and usability. In his upcoming book we will be reviewing next month, Change by Design IDEO CEO Tim Brown discusses both facets of this methodology: (1) the importance of user-centered design, and (2) the design brief. Brown gets it right. Design should start with the user, but include boundaries and feasibility constraints from the get-go. The same constraints that the Charles and Ray Eames thought of as the heart and soul of design need to be added into the design brief during development.

Line extension products, however, are rarely treated with the same rigor. An initial template is used with stylistic rather than design changes and incremental features are added, often without reassessing consumer desire. Constraints are added retroactively, and successful products are changed or limited without revisiting the customer experience. This methodology tends to lose sight of the corporate culture and the innovation process, instead turning previous innovation capital into current profits. For a few quarters, or maybe even a few years, such a strategy can seem beneficial, especially if funds that had been spent on rigorous prototyping trickle down to the bottom line. Those gains, however, are illusory. While they may sell a few units, without a new structure and process for innovation, these feature-bloated products represent a death by increments.

Cost cutting and sales pushes can be valuable tactical tools, but before executing any initiatives, good managers and conscientious designers should make sure that their tactics don't jeopardize their long-term design strategy. By putting process and culture (and customers!) ahead of profits, a company can be assured precisely of its long-term profitability. Whether analyzing decisions to advertise, to outsource, or to innovate, as guardians of the innovation culture industrial designers have an obligation to view all business decisions through the lens of strategic design. While the last year has been extremely damaging to the American economy, the cyclical lessons that this latest recession had to teach are just as profound as the ones learned in the wake of the Great Depression. When justifying a decision to a CFO that seems expensive or bold but still fits with the desires of the customer base, gently remind your superior that your competition might be working toward the same thing. The results might be the most beautiful curve you've ever made, and you won't even have to pick up a pencil.

As the book reviewer for Core 77, Robert reads heavily from both the design and business spheres. Given his past in finance and his present role in a design start-up, he hopes to bridge the gap between two cultures who think they have less in common than they do.

This is an excellent article! Very well contrived, and I found the part about the car industry especially interesting. Thank you!