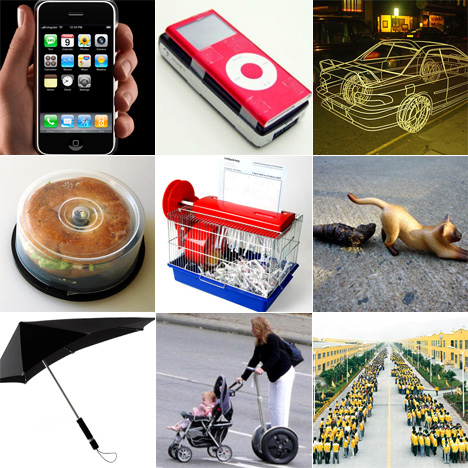 The holiday fatigue hasn't faded quite yet, but we've managed to summarize 2007 in the world of design, in chronological order to boot. Call it picky, call it terse. It is what it is so enjoy!

Like any other time of year, the iPhone hogged headlines kicking off '07 with a preemptive announcement. A "different" prototype surfaced on eBay. A perfect circle was drawn, the US House of Reps passed the Energy Alternatives bill, and a dizzying diagram told us what was the new what. Popular Jobsisms appeared in a delightful clip and BusinessWeek admitted that the word innovation had officially become nauseating. Monocle made its debut only to heavily disappoint Adam Greenfield at the close of the year. Coroflot hit 50,000 portfolios. Friendly R2D2 mailboxes hit the streets and wireframe was a most literal term when describing Benedict Radcliffe's car. CD spindle cases housed bagels and hamsters shredded paper. Home Depot announced the launch of Eco Options. Sprinkle Brigade made dog turds pretty. The SENZ umbrella actually looked different than all other umbrellas and just when we thought the toast thing was over, along came CNC toast printing. Influential exhibit Design for the Other 90% opened at the Cooper Hewitt. Waffles were made in the shape of keyboards and Jonathan Ive received the National Design Award. A mom used the power of Segway to push her baby, and although we almost forgot about it, the Microsoft Surface was announced. Damien Hirst busted out with that seizure-inducing bejeweled skull while the London 2012 logo proved to be more seizure-inducing. The USA still wasn't metric. Manufactured Landscapes was released (broadcast with Edward Burtynsky + Jennifer Baichwal here) as was the iPhone. A sweaty man waited a long time for one and a SNES spoof video was made--just two of countless amusing iPhone side stories that we don't feel like accumulating nor do we think you'd care for us to accumulate them because we're sure there's an Apple blog out there that's done it already. Cue appropriate 2007 LOL intermission: 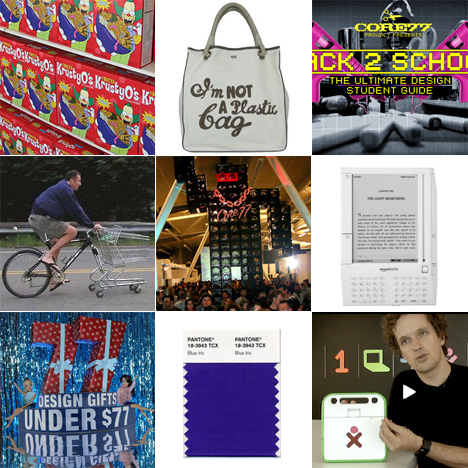 7-11 stores got all Simspon-y, Ponoko believed in the design power of the people, and Anya Hindmarch probably had good intentions. Blackle saved a bunch of search watts, Okala Design Guide came out, and (oh lordy) K-Rash designed packaging for dog cologne. We launched the Coroflot Creative Seeds blog. David Ngo did an impressive job of defining design--not an easy feat. The NYT reminded Americans to get back to work. Liz Danzico and Khoi Vin launched A Brief Message. We premiered our Hack2School guide, preparing all walks of design student for semesters to come. We were totally backed up in thinking the Pontiac Aztec was fugly. Someone had an easy time peddling their groceries home. We were like "why?" when Photoshop donned a new logo and Art Lebedev was like "why not?" when debuting the über long Pultius TV remote. Pop!Tech blew our collective mind and we built a giant robot out of milk crates for our Connecting '07 party. Frank Gehry got spanked for a leaky Stata Center. Perfect slices resulted from a laser-cut pizza and Muji opened in NYC. Kindle happened. It got beat down and corrected. Cosmologist Neil Turok, writer Dave Eggers, and religious historian Karen Armstrong were announced as the newest TED Prize winners. Coroflot hit 75,000 portfolios and we presented to you our sparkling new gift guide of 77 items under $77. Philippe Starck became cooler in our book after we watched his enlightening and delightfully-accented TED Talk. Pantone declared 18-3943 Blue Iris as 2008's color of the year. John Maeda was announced as RISD's next president and Yves Behar, the designer himself, story-told the OLPC. And we'll finish our healthy little roundup with another roundup closer--Consumerist's winner of an excellent and real-world take on a Top Ten Products list for 2007...hooray for vinegar!

See ya this year.